Mumbai Marathon returns in 2023; CM draws analogy between political events and the race at upbeat launch 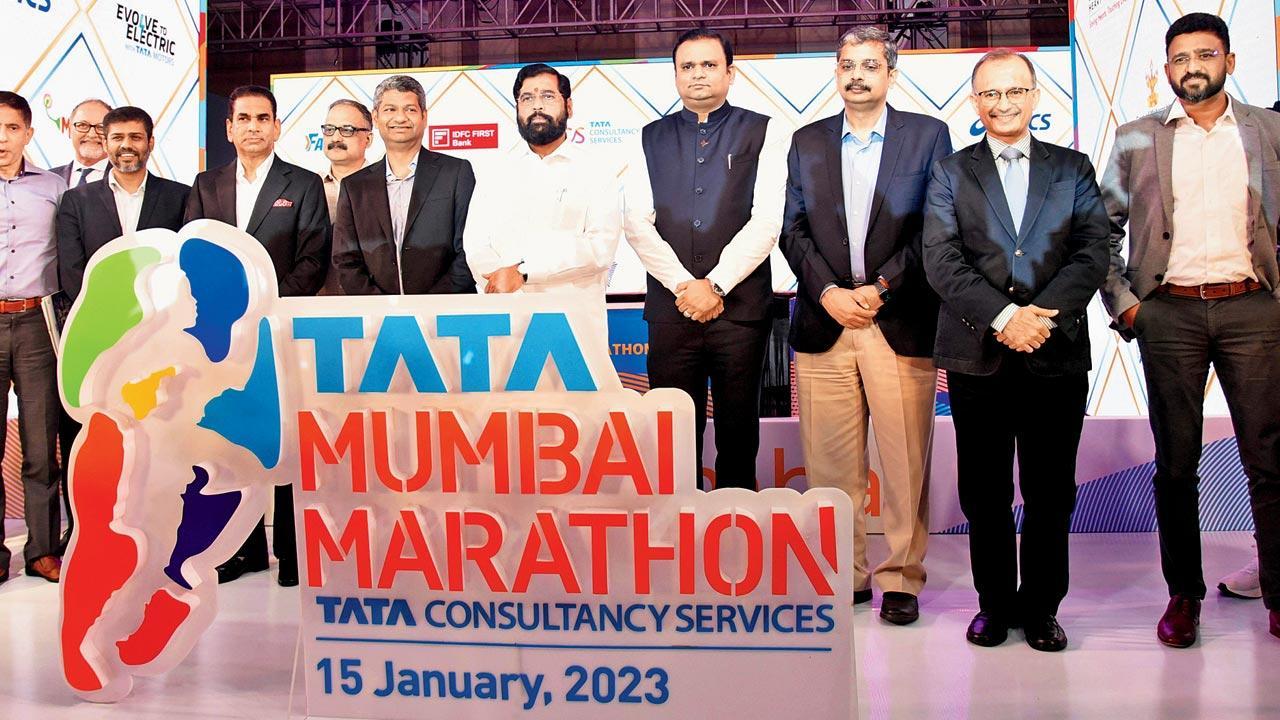 CM Eknath Shinde during the announcement for the registration of 18th Tata Mumbai Marathon, at Trident Hotel, Nariman Point, on Wednesday. Pic/Sameer Markande


The Mumbai Marathon is back on the roads after a two-year COVID-induced hiatus. The registration for the race was announced at a high-octane launch on Wednesday evening at a SoBo hotel. The Tata Mumbai Marathon will be held on January 15, 2023.

Chief Minister Eknath Shinde used the launch event to set up a cracking, political pace, using the full marathon (42 km) and half-marathon (21 km) reference as an analogy. “We also have returned after winning a marathon. Our marathon was Mumbai, Surat, Guwahati,” he said to laughs. He was referring to the recent political crisis in the state wherein Shiv Sena’s rebel MLAs had made a halt in Surat, Gujarat, before travelling to Guwahati in Assam. “That was a difficult marathon, but we won,” he added.

Shinde added, “This time, we are a ‘double-engine sarkar’; yeh tezi se bhaagegi (it will run fast).” Using the marathon reference further, he said, “We have a ticket for a half marathon, since there are 2.5 years left [until the next election]. Next time, we will run the full marathon with your support.

“This government will give justice to all sectors,” he told his bemused audience.

Finally speaking on the actual marathon, Shinde said, “Today, the event is one of the top 10 marathons in the world and that is a big achievement. It is the pride of Mumbai as well as India. It brings our community together, across all ages, caste and creed, to run as one. As the chief patron of the Tata Mumbai Marathon (TMM), I now announce the registrations for the 18th edition of the event open. We extend our support to the event and we are with you.”

The races of the 2023 edition will be flagged off from the iconic Chhatrapati Shivaji Maharaj Terminus (CSMT). The categories are the classic distance marathon (42.2km), the hugely popular half marathon (21 km), the open 10K run widely regarded as the first milestone in road running, the Senior Citizens’ Run which will see silvers rule, the Champions with Disability, and the colourful Dream Run.

While dreaming is alright, with half the city dug up for Metro and Coastal Road work, one will have to wait till the entire race route is revealed to see how Procam International, the organiser, tackles this nightmarish problem.

The road conditions though were not touched upon at the event, since it is early.

Rahul Narvekar, speaker of the Maharashtra Legislative Assembly, who was also present at the launch, said, “The marathon is in my home, literally, as Colaba is my constituency and the start and finish is at CST. As a Mumbaikar, I can say that after Ganesh Chaturthi, the Tata Mumbai Marathon is the biggest celebration we all look forward to. I urge you all to register for the event.”

Dr Vijay D’Silva of Asian Heart Institute and Medical Director of the Marathon recalled, “In the 2004 marathon, we had 20,000 runners and we had to provide aid to about 7,500 of them, proving that many Mumbaikars were not equipped to run this distance. In 2020, we had 54,000 runners, but we needed to attend to only 2,300 people. This proves the Marathon has made Mumbaikars very fit. Hope we touch 75,000 this year.”

Another health factor this time is that the marathon will only allow individuals who are fully vaccinated (both doses) against COVID-19. Applicants need to upload the certificate while applying to participate in the race.