As BMC pushes Gargai Dam, environmentalists and conservationists say project will negatively impact the biodiversity of the Tansa Sanctuary 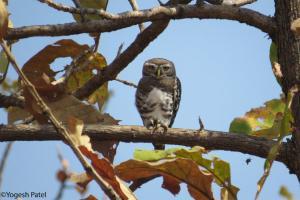 The Tansa Gargai Dam project site; (inset) the critically-endangered Forest Owlet was spotted in the area a few years ago. Pic/Yogesh Patel


Given the city's water woes, the Brihanmumbai Municipal Corporation has planned the ambitious Gargai Dam project that will require 719 hectares of forest in the Tansa Wildlife Sanctuary near Shahapur. But conservationists are worried about the adverse impact it will have on the biodiversity there. Wildlife lovers visiting Tansa Wildlife Sanctuary spotted the critically-endangered Forest Owlet in the region a few years ago, after which researchers have pressed for the conservation of this avian habitat.

The International Union for Conservation of Nature (IUCN) Red List has named the Forest Owlet as one facing a high risk of extinction. The bird was so far endemic to Satpura mountain ranges in central India. Its discovery in the Western Ghats has brought new hope about its survival.

The BMC has submitted an updated proposal about the dam project to the Ministry of Environment Forest and Climate Change (MoEF&CC) on July 5. The project, which includes constructing three new dams - Gargai , Pinjal and Damanganga, will require Environment Clearance (EC) for which the BMC is yet to apply. It had first submitted a proposal in this regard last year.

According to the updated proposal, diversion of 719.39 hectares of forest land from the Tansa Wildlife Sanctuary has been proposed for the project to meet present and future drinking water requirements of Mumbai. The sanctuary is a part of Thane wildlife division in Palghar. The BMC will also need to arrange for the Resettlement and Rehabilitation of 280 tribal families staying in seven villages - Ogada , Fanasgaon , Pachghar , Tilmal , Amale , Khodade - in the proposed project area. The project requires another 135 hectares of non-forest land too.

Mumbai gets 3,800 MLD of water supply every daily from seven dams and if the project succeeds, it will help in providing an additional 2,891 MLD water to Mumbai by 2050.
'Irreversible damage'

Environmentalists have, however, raised a red flag. "Submerging a huge portion from Tansa forest which is home to the critically-endangered Forest Owlet and other wildlife species is a very wrong idea. It will cause irreversible damage," said Stalin D, environmentalist and member of NGO Vanshakti. "The population of Mumbai is not increasing, the luxurious wastage of water by premium apartments is. This cannot become a reason to displace wildlife and tribals and submerge forests. The city cannot become a parasite that eats away the forests of the state and push tribal people into misery," he insisted.

Along with the proposal to MoEF&CC, the BMC has also submitted a note justifying the choice of location. "Although a considerable length of the Gargai river passes through reserved forests and Tansa Wildlife Sanctuary, the submergence of forests and/or sanctuary has not been considered as a long-term adverse impact in concluding the location of the dam. In fact, a dam enriches the surrounding flora and fauna, due to the reservoir formed at its upstream. It is seen as a long-term positive impact that the dam may have on its surrounding region," the note stated.

The 320-sq km Tansa Wildlife Sanctuary vegetation corresponds to the "southern tropical moist deciduous forests and provides ideal conditions of harbourage to a variety of birds and animals," the state forest department website states, adding that there are at least 54 species of animals and 200 species of birds in the sanctuary including Panther, Barking Deer, Mouse Deer, Hyena, Wild Boar etc.

The BMC's proposal also states that the Tansa sanctuary presently experiences considerable human interference and therefore needs habitat improvement measures. "The area of the sanctuary around the project is large enough to house a number of animals but the forest does not contain sufficient pastures and therefore there is a scant population of Ungulates, thus interrupting the food chain capable of supporting higher feline species. This project, therefore, has planned to develop pastures to complete the food chain and avoid human-animal conflict in the long run," it reads, adding, "It does not have perennial sources of water. Gargai project has proposed to reserve 0.5 per cent of its water capacity for wildlife. It will be routed to existing water holes."

Kedar Gore, conservationist and director of The Corbett Foundation said, "This forest falls under Parali Range of Palghar district which is perhaps one of the best forest areas of Tansa. A biodiversity assessment of Parali Range by the BNHS a few years ago mentioned all the flora and fauna of the area. The point is not just about Tansa sanctuary but forests and wildlife of Shahapur, Khardi, Vaitarna and East Wada that will come under the catchment area, and thus be severely affected. This project should be opposed at this stage itself before things progress further."