While some parents have demanded that the school refund their money, a majority have said that it must start offline classes from rented premises at the earliest


Hundreds of parents of children at The Green Acres Academy (TGAA) in Mulund, outraged that the school’s new building’s opening was postponed for the third time, demonstrated outside it on Thursday, demanding an explanation from the administration. While some parents have demanded that the school refund their money, a majority have said that it must start offline classes from rented premises at the earliest.

According to the parents, the school building is still under construction and does not have an occupancy certificate (OC). They claim the school administration has not provided them with a clear picture of the issue. “Looking at the under construction building, I think it will take another four to six months to finish. Then there is the Fire NOC and other requirements to get an OC. However, all the school administration has done is assure parents that it will begin shortly, fooling us all the time. We want the education authorities to step in and take action against the school management,” said one of the parents. 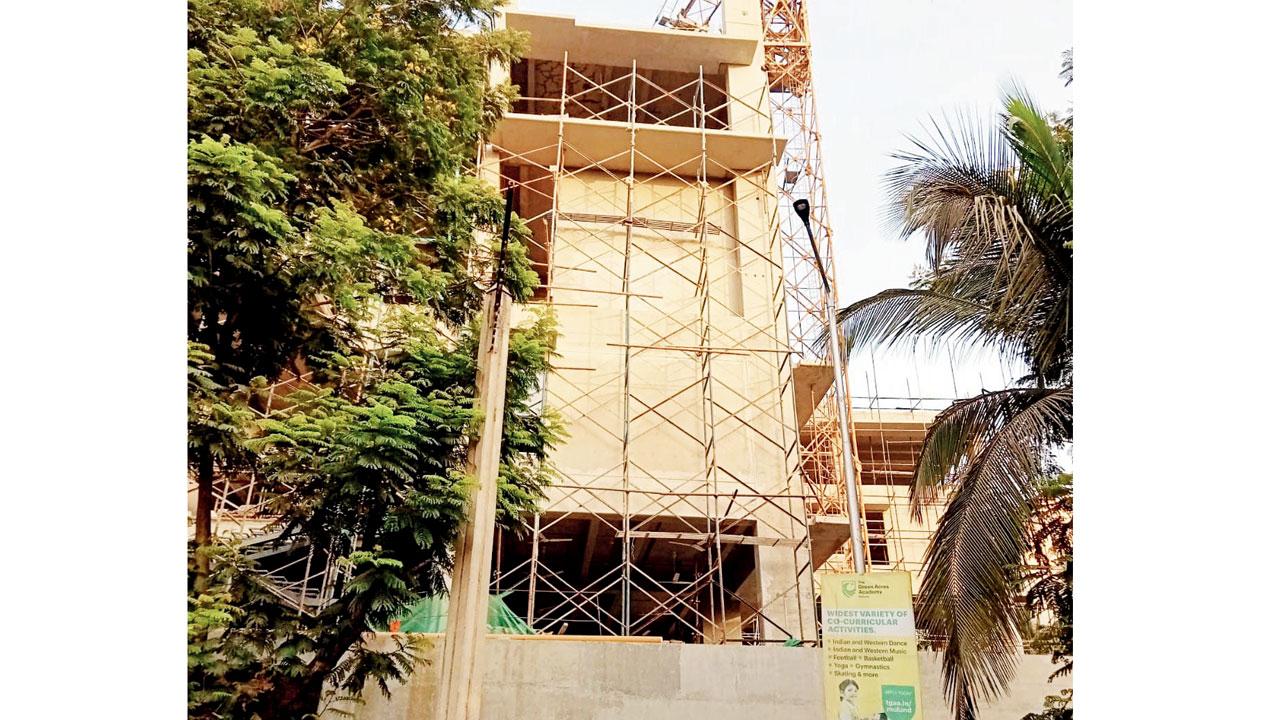 The construction of the school’s building began in 2021

On Thursday some parents approached the Mulund police station seeking action. Some parents are now thinking of taking legal action. There are almost 2,000 students at TGAA. The school charges Rs 1 lakh as one time admission fees for new admission besides the regular fees. However, this year, the school had waived off the one time admission fees, attracting many parents. Some even cancelled their children’s admissions at other schools and opted for it.

In their announcement the school administration had stated, “Our brand new building in Mulund launches in 2022. To celebrate, we are offering a 100% exemption on the one-time fee of Rs 1L for admissions done before February 28th.” “The school where my daughter was studying earlier had doubly hiked fees this year, hence I decided to withdraw the admission and enrolled her at TGAA - Mulund. I now regret my decision,” the parent added.

Harshita Dagha, another parent said,  “All we need is for the management to tell us the truth or just refund our money if they are unable to start the school anytime soon, even if it is from a rented premises.” Another parent said, “If fee payment is slightly delayed, the administrative team gives us multiple calls and sends a series of messages. But now when we are sending them emails, none of them have replied. The school will not start offline classes anytime soon and some parents are now contemplating legal action.”

Some parents took to Twitter to share their experience. Tagging school education minister Varsha Gaikwad and environment minister Aaditya Thackeray, N L Gogri tweeted, “Our child’s school - Green Acres Academy, Mulund has made false promise about school opening offline on 6th June. But now they are delaying it and forcing us to attend the school online. There are many other false promises made before taking admission. please look into the matter.” (SIC). On Thursday after the parents rushed to the police station, three members of the school administration who were called there, assured the police  that school will begin from July 4 from a rented building.

In a recorded video message from, Rohan Parikh, managing director of the Green Acres foundation said, “It has always been our goal to provide top quality education at a price that is as affordable as possible. I have seen how hard our team has slogged to get the new building ready in record time. Sadly, government bureaucracy accounts for such a time waste. In that time in between, our team has worked relentlessly and we are nearly there. The building is being given to the academic team for occupancy and the final touch ups are in progress.”

Parekh concluded the message by tendering his apology and informing the parents that they need a month more to start the offline classes. “Our work has been delayed by a month and the buck stops with me. I take the responsibility for the inconvenience caused to you. As a parent myself I know what a pain homeschooling is.  I make a personal appeal to all of you for a final month of patience.”

2k
Approx no of students at The Green Acres Academy

Next Story : If cases rise rapidly in the next 15 days, mask mandate will be back: Maharashtra CM Uddhav Thackeray