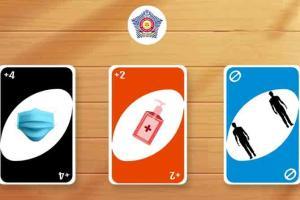 
Mumbai police commissioner Param Bir Singh has been posting some mindful yet quirky post to make people aware of the mandatory precautions one must take to contain the spread of COVID-19.

In his recent post, the top cop shared a post tweeted by Mumbai police inspired by popular card game ‘Uno’. The image shared along with the post shows the three cards with pictures of a mask in one card, a bottle of sanitiser in another, and figures of two persons standing apart, indicating the measure of maintaining social distance, in the third card.

The effectively framed caption for the post reads, “Pull a 'reverse' on the virus, don't 'skip' your mask. #SayNoToVirus.”

Shared on Friday, the post garnered close to 500 likes.  Users commenting on the post praised the police department for coming up with such innovative posts and for their efforts during the pandemic.

Kudos to the Maharashtra and Mumbai police force... Especially during Covid situation. I would request and hope by high standards set of police force they would surely get the whoever culprits in Sushant case, thank you for your undue service to the public, thank you CP sir .

The commissioner had recently shared a post making a hilarious reference to 1990’s Bollywood comedy caper Andaz Apna Apna. The police department had played around with one of the popular dialogues of the film to urge their followers to wear masks in public. They shared a still from the film featuring actor Paresh Rawal in his double-role characters and one of them wearing a mask.

The text on the image reads, “Teja main hu, mask idhar hai’ (I am Teja, here’s the mask). Another popular dialogue of the film was used as the caption of the post, “Smart Boy!’, used with the witty hashtag “#MaskApnaApna”.