Mumbai says hello to its pride

On October 17, Ravindra, the then-oldest lion at SGNP, died of age-related disease. Only an 11-year-old male lion, who is unwell, could be seen at the park 
A long-awaited pair of captive lions from Sakkarbaug Zoological Park in Junagadh, Gujarat have finally arrived at Sanjay Gandhi National Park. mid-day on September 23, reported about the Maharashtra forest department awaiting the approval of the Central Zoo Authority (CZA) to transfer the big cats, which are capable of breeding, and the move was green-lit on October 31. The arrival of the newcomers will give a boost to the SGNP’s captive safari. On October 17, Ravindra, the then-oldest lion at SGNP, died of age-related disease. Only an 11-year-old male lion, who is unwell, could be seen at the park.

Dr V Clement Ben, additional principal chief conservator of forest (PCCF), Western Wildlife Region, Mumbai, said, “Following the approval by the CZA, a male lion, D11, and a female, D22, were brought to SGNP. In exchange for this pair, SGNP will be sending a male and female tiger to Gujarat. We didn’t have a breeding population of Asiatic lions, which were a great attraction of the captive lion safari at SGNP.” 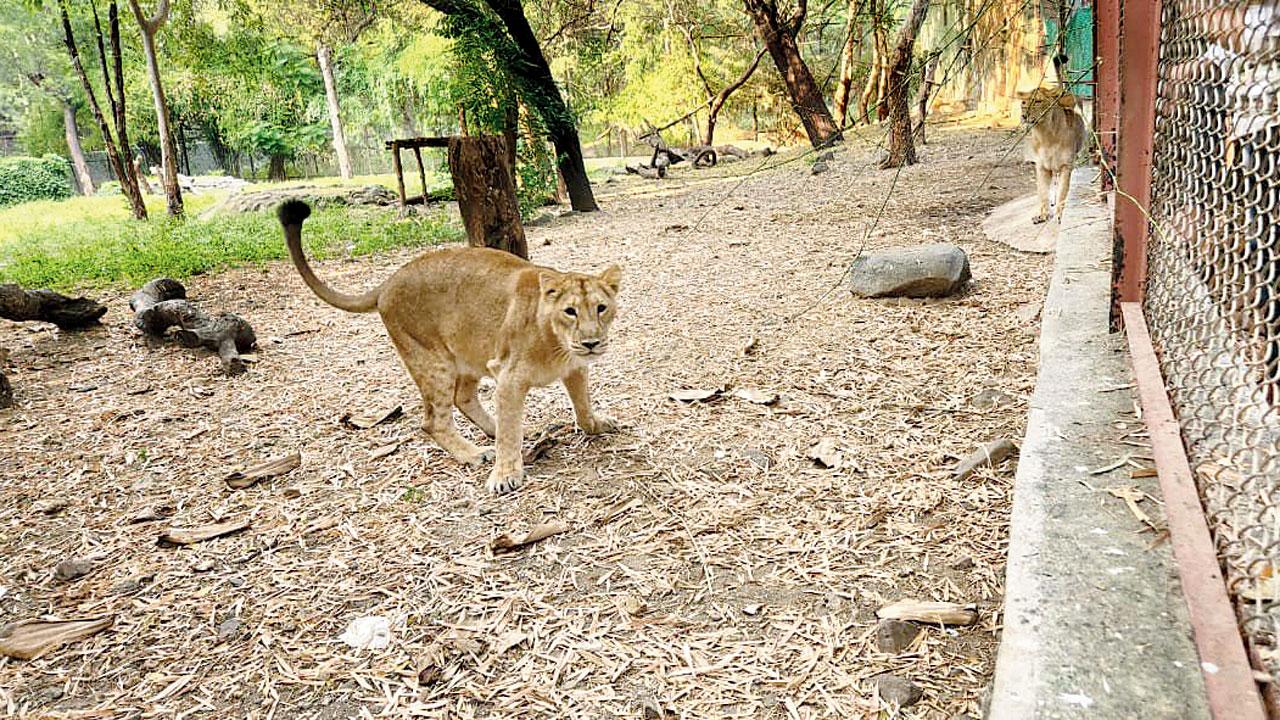 The lions that have arrived at Sanjay Gandhi National Park

The additional PCCF and SGNP Director and Conservator of Forest G Mallikarjun have played a pivotal role in getting the lions from Gujarat. Mallikarjun said, “Jespa, the 11-year-old captive lion at SGNP, has been suffering from severe chronic osteoarthritis, leading to progressive musculature degeneration of the hind muscles.” This has led to multiple decubitus ulcers (bed sores), septic wounds and abscesses. He has been unable to get up for the last 15 days.” “The pair of lions that have been brought to SGNP is three years old and they have been kept in isolation for now. We will give them a few days to settle down as they travelled 750 km via road,” said Mallikarjun.

The captive lion safari was started in SGNP in 1975-76, and it has been an important tourist attraction, helping to generate revenue for the park. The lions in the safari were born to Asian and African big cats rescued from circuses. The CZA has directed that mating not be allowed between captive Asian and African lions, because of which the population of lions at SGNP did not increase. For many years, SGNP authorities have been trying to bring a pair of breeding lions from Gujarat for its captive lion safari. During the time of the MVA government, then-Environment Minister Aaditya Thackeray had instructed the SGNP authorities to initiate the process of obtaining captive lions from Gujarat.

In September, Maharashtra Forest Minister Sudhir Mungantiwar met with his Gujarat counterpart Jagdish Vishwakarma in Ahmedabad and discussed the exchange of two Asiatic lions from Sakkarbaug Zoological Park for a pair of captive tigers from SGNP. They decided to seek joint approval from the CZA for this endeavour. In September 2020, the SGNP also approached the Telangana forest department for a pair of lions from Nehru Zoological Park in Hyderabad. However, the Telangana forest department wanted to swap lions for lions.

750
The distance travelled by the big cats in km

Next Story : Mumbai: 2,900 toilets in suburban slums to be repaired soon