According to preliminary information from Mumbai police, a 24-storey building is being constructed at Kannamwar Nagar 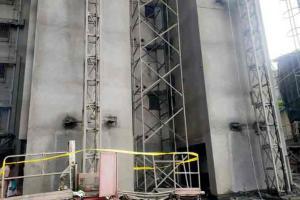 The workers were on this suspended scaffold when it fell at an under construction building at Vikhroli. Pic /Rajesh Gupta


Two workers died when a suspended scaffold they were standing on to work at an under construction building at Kannamwar Nagar, Vikhroli, fell on Thursday evening. An Accidental Death Report (ADR) has been filed in connection with the incident.

According to preliminary information from Mumbai police, a 24-storey building is being constructed at Kannamwar Nagar. Around 4.25 pm people at the site heard a loud thud. When they rushed towards the sound they found the suspended scaffold had collapsed with two persons on it.

They were immediately taken to Rajawadi Hospital where they were declared dead on arrival by doctors. The deceased have been identified as Bhola Yadav, 30, and Itwari Yadav, 35. "As per the initial information, they had got onto the suspended scaffold on the 22nd floor and as soon as they started it, it fell," said an officer from Vikhroli police station.

A partial collapse of a two-storeyed building in Byculla on Thursday led to the death of an elderly lady. Civic officials said that the incident was reported at 4:46 pm when a part of the toilet collapsed in Mishra building. Two of the residents were rescued and taken to JJ Hospital. While Noor Qureshi, 70, was declared dead, Aliya Qureshi, 12, sustained injuries.

Next Story : No Chinese apps? No sweat, IIT-B has a desi version