An initiative by activist Mehandi Ali in association with the Shri Mahashakti Charitable Trust, the school hopes to integrate the third gender into the mainstream 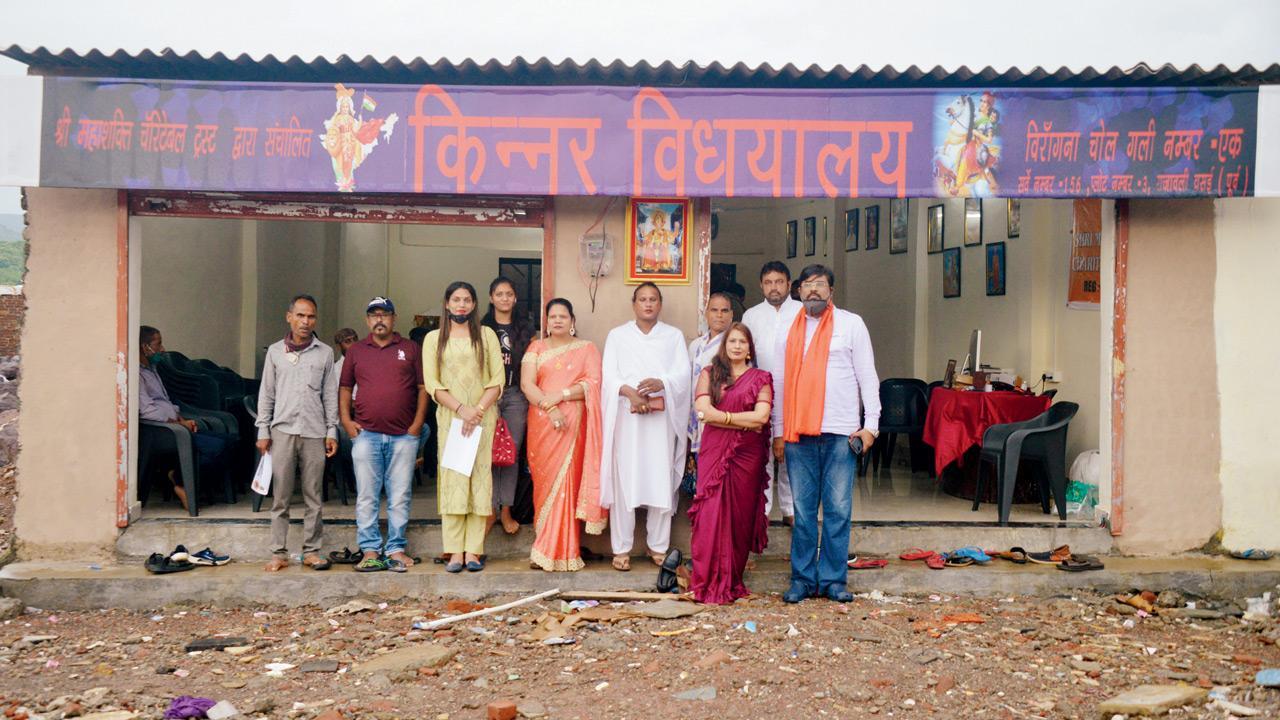 
In a heartwarming initiative, a new school for transgender people has opened in Vasai East. Touted to be the first such educational institute in Maharashtra, its aim is to empower the community and make them self-reliant.

Kinnar Vidyalaya  is located off Mumbai-Ahmedabad Highway in Rajivali, Vasai East. Mehandi Ali, 47, a resident of Lokhandwala, told mid-day that she had been planning to open a school for transgenders for a long time as the community faces discrimination almost everywhere. “It was my dream project. I had been planning to open it since the last four years, but it was always stonewalled for one reason or another. The lockdown only added to the delay, but I am happy to get the support of Shri Mahashakti Charitable Trust and many government officials, including IPS and IRS officers, doctors, and advocates who came forward to fulfill my dream.”

The school is surrounded by slums. The chairman of the Trust, Rekha Tripathi, said that apart from providing free education to transgender pupils, they will also encourage children from disadvantaged families to seek admission

According to Ali, the discrimination against them has continued unabated despite the community getting a legal status in India in 2014. Over two dozen transgender pupils have taken admission at the school, which was inaugurated on Friday. “No one thinks about the welfare of kinnars; they only make fun of us. It hurts,” Ali said.

“The Supreme Court has recognised transgender people in 2014, but the third gender students often face bullying and discrimination at school, resulting in them dropping out,” added Ali,  who said she could not get admission at a school in Andheri, when she was six years old due to her orientation. “Education stimulates real growth and we don’t want any student to be deprived of that.”

Paras Thakur, 26, is a teacher at the Kinnar Vidhyalaya. A meritorious student, who secured 74 per cent in SSC and 78 per cent in HSC exams, Thakur was compelled to drop out due to the daily harassment she faced in college. “I even tried to conceal my identity, but people judge on the basis of your body language. I could not use the boys’ toilet during recess,” said the Malad resident. She would rush to the restroom during lectures in order to avoid being bullied. “It is not possible for us to conceal our identity, and why should we? It’s not an offence.” Thakur originally wanted to become a flight attendant and pursue modelling. “I had to fill a form at the institute [to become an air-hostess], but there was no column for transgenders. With almost all avenues shut, I slipped into depression. Eventually, I joined a showroom as a salesman in a shopping mall in Mumbai to earn two square meals,” Thakur added. In the interview, Thakur’s boss asked her to dress as a man if she wanted the job. “Since I needed a job, I worked for six months. I finally resigned as I couldn’t do it any longer.”

Paras Thakur, 26, is a teacher at the Kinnar Vidhyalaya. A meritorious student, who secured 74 per cent in SSC and 78 per cent in HSC exams, Thakur was compelled to drop out due to the daily harassment she faced in college

These days, Thakur is earning a livelihood by being part of the badhai toli or dance troupe comprising hijras, who perform at events.

The Kinnar Vidhyalaya is surrounded by slums. The chairman of the Trust, Rekha Tripathi, said that apart from providing free education to transgender pupils, they will also encourage children from disadvantaged families to seek admission. Vishal Bhagat, general secretary of the trust, said, “At present the school is open to students upto Standard V, but we plan to extend it till matric- ulation.” Kinnar Vidyalaya will also offer vocational guidance and skill development workshops in handicrafts, waste management, beauty and interior decoration, among other subjects. “We will also hold exhibitions of handmade products to encourage and publicise their craft work,” Bhagat said.

According to Ali, there are well educated members in the transgender community, who aren’t getting jobs in private firms. “I would like to encourage the corporate sectors to be open to hiring transgender people to work there.” Ali, who is well-known in Mumbai, has worked in TV soaps and done cameos in Bollywood movies. She has recently signed a movie titled, Balak.