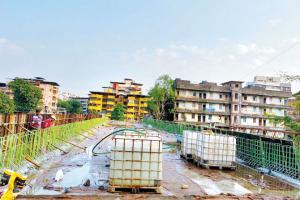 Work on the new Kopar bridge near Dombivli station is underway


One more bridge declared dangerous by the Indian Institute of Technology Bombay is getting back in shape fast, and is expected to be thrown open for the public before March 2021. Work on the new Kopar road bridge near Dombivli station is finally firmly in place, with the railway portion almost complete.

The other part, which is being executed by the Kalyan-Dombivli Municipal Corporation (KDMC), moving ahead. The bridge was closed for traffic in September last year, after IIT-Bombay in an audit declared it unsafe.

Central Railway officials said the railway portion of about 52.35 metre with three spans and a width of 11.50 metre is nearing completion. The KDMC and the railways dismantled the 39-year-old bridge between April 17 and April 30, when the city was under COVID-19 lockdown.

The dismantling work which would have otherwise required a railway block was completed in just two days. "Initially, the plan was to use diamond cutters and it would have required 45 days with two hours of daily blocks at night. During the lockdown period, it's being done with a concrete breaker in daytime," an official said.

A part to be retained

Once the bridge was demolished, it was followed by replacement of rusted bearings, cross bracings and a new deck slab was casted on October 18. While the west-side stone masonry walls would be retained as they are in good condition, the underpass road on the east side will be rebuilt. Work
on east approaches is underway now.

A joint safety audit had been conducted of all the 445 road overbridges, foot overbridges in Mumbai in 2019 to improve commuter safety. One internal team of only railway officials carried out inspection at night on tower wagon and another was conducted by a team of people from IIT-B, civic body and railways.

Also Read: Mumbai: Key Dombivli bridge will be opened for public in August 2020

On Central Railway, of the 299 audited bridges, 89 were road bridges, 191 foot overbridges and 19 other structures, like pipelines, etc. Of the 299, 276 were audited and assessed by CR engineers and 23 jointly by IIT-B and CR teams.