Hospital administrator says they're not even considering giving into the hackers' demands; none of the patients have been affected 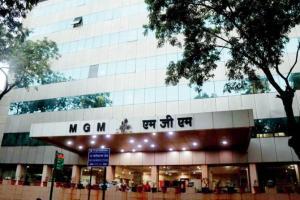 The hospital has not responded to the hackers yet, and is trying to recover the encrypted data. Pic/Rajesh Gupta


Mystery hackers have held the computer system of MGM hospital in Vashi to ransom since Sunday, demanding payment in bitcoin to decrypt it. The amount of money the hospital has to cough up will depend on how much time it takes to respond to the hackers' demands.

While none of the patients have faced any major issues due to the incident, the hospital authorities have admitted to encountering difficulties in discharging and billing them.

The hack came to light around 9 pm on July 15, Sunday, when the hospital receptionist started her computer. She wasn't able to log into the 179-bed hospital's system. Following repeated failed attempts, she contacted hospital system administrator Amit Vavhal to inform him the system wasn't working. Vavhal tried to get into the system through remote access and succeeded, but was left stunned with the message he saw on the screen.

The message said: "All your files have been encrypted due to a security problem with your PC. If you want to resolve them, write to us on the e-mail. You have to pay for the decryption in bitcoin. The price depends on how quickly you write to us. After the payment is made, we'll send you the tool that will decrypt all your files." The hackers have also given information on 'how to get bitcoin' in their message.

Disconnect server
After reading this message, Vavhal contacted system coordinator Ramnath Parmeshwaram. "On Sunday night, Vavhal told me that the system has been attacked by a virus, and to save it from spreading further, the server needs to be disconnected from the Local Area Network (LAN) as soon as possible. Another employee and I then reached the hospital and disconnected the servers from LAN, but when we checked the entire system, we found that the virus had already spread in the entire hospital." The hospital has not responded to the hackers yet, and is trying to recover the encrypted data. Vavhal then informed the hospital administration about the ransom attack, who in turn contacted the Navi Mumbai police. Cops asked the hospital to register a formal complaint at the Vashi police station. A case has been registered at Vashi Police station on the evening of July 16 against unknown persons.

"We have registered an offence and are probing the case. We're yet to trace the PC which was the first to be infected. That will help us trace the IP address [the attack came from]," said DCP (crime) Tushar Doshi.

No patients suffered
While the probe is on, hospital authorities said none of the patients have suffered due to the attack. Speaking to mid-day, administrator of MGM hospital P Shashankaran said, "We faced difficulties from Sunday night to Monday afternoon, but we're recovering now. Patients haven't suffered. We're in touch with cops and experts to address this issue. We still have some issues with the discharge and billing system, but they will eventually get resolved. We're not even thinking about giving them the money."

A source in hospital said, "Data of the last 15 days has been compromised, which includes information of patients, and medicines issued for them. Salary data has also been damaged. The billing and registration department was carrying out their work manually."

Where's my data?
Seema Awasthi,
patient
'The hospital didn't have any data from my previous visits. They asked me whether I had papers with me, when I said I didn't, they said 'it's okay'. When I asked them why, they said nothing'

Deepak Shinde,
relative of a patient
'I didn't notice any issues
with the working of hospital, although I found it odd that the chemist was manually writing all the bills on Monday. But the system is working today [Tuesday]'

Akshay Sarpotdar,
relative of a patient
'An emergency surgery had to be performed on my relative for removing kidney stones, but I was told by the staff that some planned surgeries have been postponed'

Next Story : Mumbai Crime: City becomes hub for production, export of speed to US, Europe