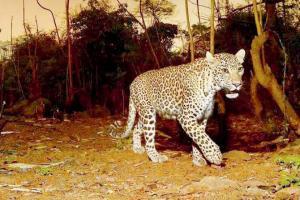 Nine leopards of the Aarey forest are among the five species that has mention in the IUCN Red List. File pic

The report has been sent to the Ministry of Environment and Forests (MoEF), International Union for Conservation of Nature (IUCN) and United Nations Environment Programme (UNEP). The most concerning aspect of the report is that the Aarey forest has five species (including leopards), which has mention in the IUCN Red List, as they are inching towards becoming endangered. In view of this, the NGO has invited the IUCN India chief to visit Mumbai so that he could take a closer look and help in saving the forest.

Speaking to mid-day, Jalpesh Mehta, founder, Empower Foundation, said, "We have written to the IUCN and mentioned details of the 290 wild species in Aarey, including the five that features on their Red List. These include leopards, Rusty spotted cat, Sambar deer, Alexandrine Parakeet and Red-wattled Lapwing. We have also attached some pictorial evidence of the wildlife present in the forest. The IUCN is a global body that protects primary forests and helps countries meet international commitments on climate change and biodiversity and UNEP is the global environment authority. It is time that international bodies guide and help us. We have also invited IUCN India chief Vivek Saxena to visit Mumbai so that he can take a look at the wildlife present in Aarey."

The report states, "The five sensitive species on IUCN's Red List, which are moving towards becoming endangered, are currently in the vulnerable category. These include leopards, Rusty spotted cat, Sambar deer, Alexandrine Parakeet and Red-wattled Lapwing. Our team went through all the records on wildlife in Aarey and compared each of the species on the IUCN Red List to highlight the issue. We have also highlighted that Aarey is not just the habitat of these 290 wild species, but a forest where many species have been discovered too."

The NGO has also shared 19 pictures of the wildlife in Aarey, of which three are of rescue operations just 400 metres from the proposed Metro III car shed site. It has also highlighted the gaps in the Environment Impact Assessment study of the forest for setting up the car shed. "The IUCN works to build sustainable landscapes, protect primary forests and advance the rights of forest communities. Through its forest initiatives, it helps countries implement effective forest and land-use policies, achieve national priorities and meet international commitments on climate change, biodiversity and land degradation," the report adds. "With this, we have urged the IUCN chief of India to visit Aarey. We have also urged UNEP to look into the matter as it is of international importance," concludes the letter.

Next Story : Mumbai: Confused when inside a hospital? This app will help