Shiv Sena has been with the locals, trying to prevent the redevelopment of the house while the BJP workers are supporting the members of the trust that it was sold to 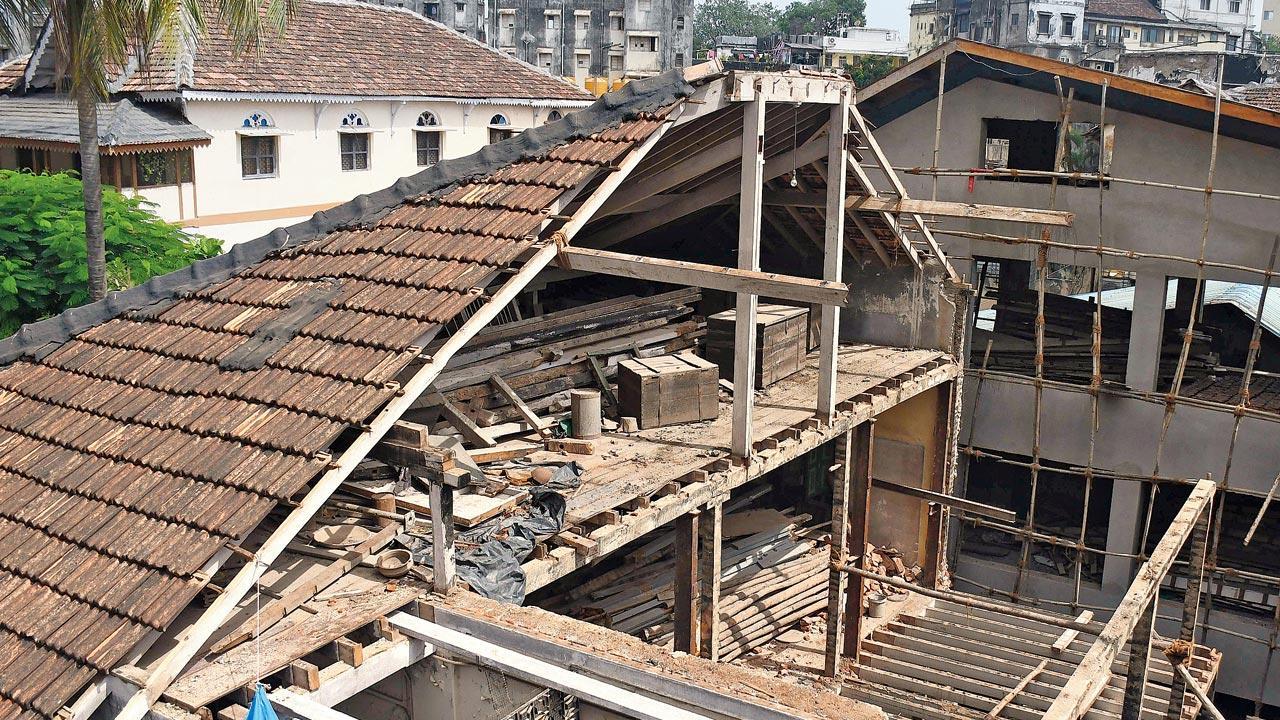 A stop-work notice was pasted on the bungalow but locals claim attempts were still being made to tear the structure down. Pic/Ashish Raje


The redevelopment of the Fernandez House in Girgaum’s 200-year-old heritage hamlet of Khotachiwadi has now taken a political hue. While the Shiv Sena has been assisting locals in their efforts to prevent the redevelopment, sources in the BMC have confirmed that senior BJP leadership in the city has now intervened in the matter in support of the new owner of the property.

As a mark of protest and to build pressure on the Mumbai civic body to register an FIR, the residents of Khotachiwadi submitted a signature campaign on Monday. They submitted their petition with 114 signatures from the community and submitted a grievance letter to the Brihanmumbai Municipal Corporation's (BMC) D ward office.

For the past month, the Khotachiwadi residents have been fighting to preserve their heritage precinct after the new owner of a bungalow opted for redevelopment and began tearing it down. A few of them approached the local Shiv Sena leader for help. “The Shiv Sena Shakha Pramukh has been helping residents in the matter. After Tourism Minister Aaditya Thackeray himself intervened and BMC issued a stay last month, a stop work notice too was pasted outside the bungalow. However, there are still attempts being made to tear the structure down. We want the BMC to file an FIR against the developer and new owner of the bungalow,” said Prasad Ambavkar, a resident of Khotachiwadi. 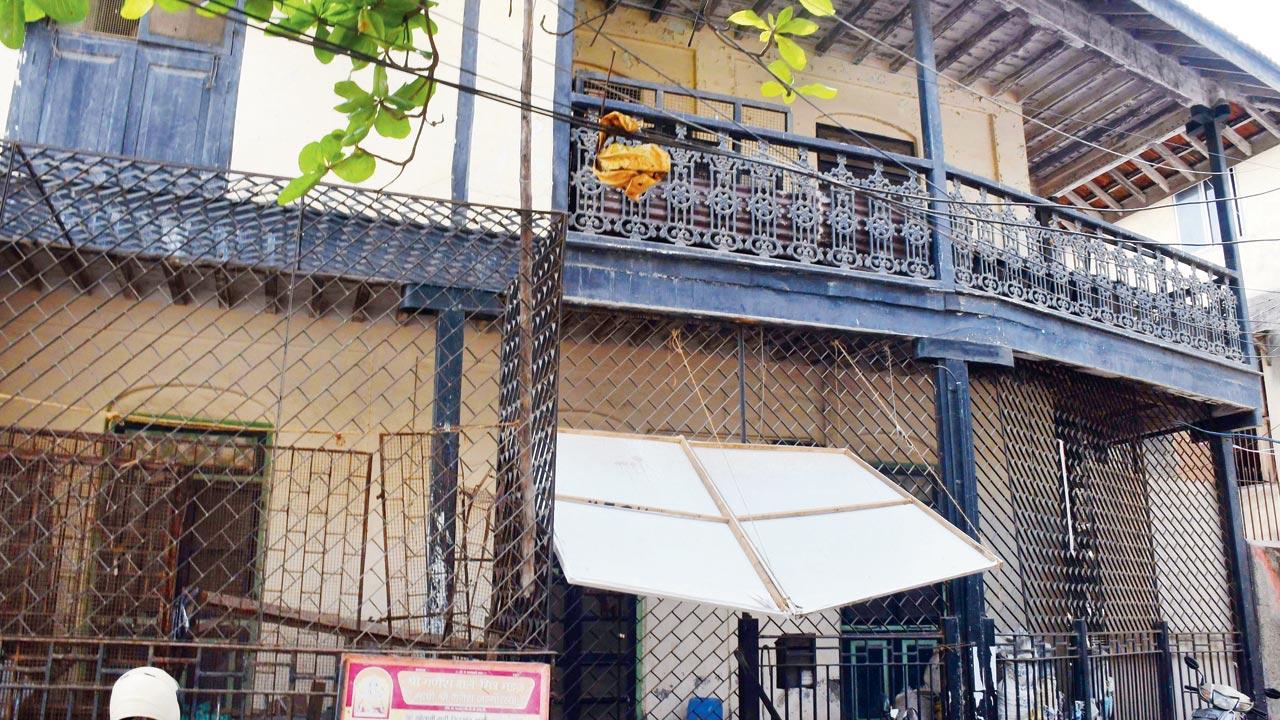 The bungalow is now owned by a trust. Pic/Ashish Raje

Residents claim that Fernandez House, the bungalow, was sold to a trust belonging to the Jain community by a co-owner who is now over 90 years old, and the new owner has opted for redevelopment with the intention of constructing a place of worship or accommodation for priests on the property. According to the BMC’s letter to the Mumbai police, the trust is headed by one Nilesh Shah.

According to sources in BMC, the trust members are being supported and assisted by the local Bharatiya Janata Party (BJP) leadership, following which they have managed to obtain Intimation of Disapproval (IOD) and Commencement Certificates (CC) for the redevelopment, BMC officials confirmed.

Interestingly, despite BMC’s stop work notice to the demolition and redevelopment, the new owner of  Fernandez bungalow managed to obtain IOD and CC from the civic Building Proposal Department.

An IOD is an essential permission granted to the developer by the municipal authorities. After development, plans are submitted to the Building Proposal Department of BMC, an IOD is issued, and under the terms and conditions of the IOD, the developer is asked to comply with many requirements and obtain various clearances from the environment authorities, tree authority, Fire Officer, etc. After these clearances are obtained, the developer is entitled to obtain a CC. The CC is  issued by the appropriate local authority certifying that construction may commence. Hence in this case the redevelopment can legally commence after IOD and CC were obtained by the other party on May 20.

“Even if IOD and CC have been sanctioned, we have still not revoked the stop work notice and demolition cannot be done. Our officials visited the spot and inspected the bungalow again on Tuesday,”said Prashant Gaikwad, assistant municipal commissioner,
D ward.

On April 27, Ambavkar and a few others from the area complained to the BMC alleging the unauthorised demolition of the bungalow in the precinct. A team of BMC officers  inspected the premises the same day. On April 28, the civic body issued a stop work notice under section 354A of the Mumbai Municipal Corporation (MMC) Act 1888, to Nilesh Shah.

“They started demolishing the structure from the inside discreetly on the pretext of repair work. Now we have realised they have completely hollowed the structure from the inside. The new structure will  destroy Khotachiwadi’s charm,” Ambavkar said. Khotachiwadi is a designated and listed heritage precinct, and one has to obtain permission from the BMC heritage committee before commencing any construction work there. But what was once a quaint hamlet of over 65 bungalows has now shrunk to mere 25 bungalows. Even after the stop work notice was issued and the ongoing work was stopped, there have been regular messages and ‘SOS’ alerts floating across social media and even in the BMC office that demolition has begun.

“These messages are nothing but rumours. As soon as these messages appear, we rush to the spot for inspection only to find it was a false alarm. The work cannot start until we cancel the stop-work order,” said a BMC official from D ward.

Bala Ahirekar, Shiv Sena Shakha Pramukh from Girgaum said, “The bungalow is part of the heritage precinct, the demolition and redevelopment work was being done without obtaining permission from the BMC or the civic heritage committee. How can IOD and CC be sanctioned without a no-objection certificate (NOC) from BMC’s heritage committee? Without the heritage committee’s approval, the NOC from the building proposals department cannot be issued by BMC. On Tuesday when we visited the ward office, the president of BJP's Mumbai unit Mangal Prabhat Lodha, and two BJP corporators from D ward along with Nilesh Shah were present there.”

“This is a fight for survival and a people's movement to save this heritage precinct, and it should not be turned into a political battleground. We will support the local residents,” he added.

However, when contacted, Lodha said that he was at D ward office on Tuesday but not for the Khotachiwadi issue. “I was there to discuss issues of footpath and not Khotachiwadi,” Lodha said.