Proposed shifting of Parsi Gates lead to a lot of shouting 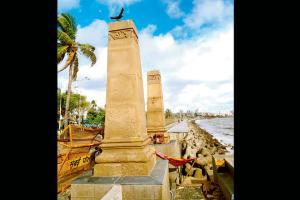 The Parsi Gates at Marine Drive


On June 30, a small group of people, including some Bombay Parsi Panchayat (BPP) trustees and others from the community met with BMC officials, with reference to shifting the Parsi Gates on Marine Drive. These Gates, currently opposite the Taraporewala Aquarium, are to be moved further down south from the present location, as the Coastal Road design has necessitated the shift, civic authorities stated.

The Gates lead to stairs from which the community can access the beach and pay obeisance to the water. This recent meeting where an alternate location was discussed, has irked some members of the community. One section is fired up that the invitees did not raise any objection to the proposed shifting. There are others that say those who had raised objections in writing in the first place with the BMC, had not been called for the meet at all.

Social media has become the battleground with messages flying through community chats about the Parsi Gates shifting.

Prominent community member Jamshed Sukhadwalla said, "I did not want to participate in the Coastal Road issue, as I had been backstabbed earlier during a community-centric issue. Yet one must be open and transparent when it comes to decisions. The people who have done the original teamwork and legwork must be involved. What we need now is a proper discussion with technical persons, about the suitability of the shift and new site, we need a proper technical meeting."

Objections to the shift
In his media messages, Sukhadwalla said that what ails the community is "Bypassing those who are concerned (by which he means the father-son duo of Khushru and Rayomand Zaiwalla), who had logged their objections/suggestions within permissible time with authorities with reference to the Parsi Gates, and they were not informed about the meeting."

Sukhadwalla added that, "History will chronicle this event as a thunder stealer by perspiring and aspiring BPP trustees."

Khushru (Rayomand Zaiwalla's father) in his July 3 communication to the BPP trustees, outlined the primary objections as, "The proposed alternate site towards Churchgate is in the direct line of the monsoon winds and the gale, which every year claims without fail, a number of lives...With eyes wide open the Trustees have agreed to so-called relocation without any application of mind, much less the safety of the worshippers," it said.

One of those invited but who could not make it to the on-site meeting on June 30, was former BPP chairman Dinshaw Mehta. He learnt of what transpired at the meeting and said, "The alternate proposed site is good, there is no problem. There are only some people who are making a noise. In fact, the civic team explained to us very well, how the new spot will give people access to the water. If the Gates stay at the present location there will be three lines of traffic on either side and the sea will water will move much further inside, it will be very difficult to access. The officials have been clear and this seems very feasible. The land belongs to the BMC, so we need a little give and take. Only a few of us were invited. These are all ego problems."

War games
Zoru Bhathena, another invitee from the community has claimed that the "WhatsApp warriors are making a hue and cry only after things are over." Bhathena, who is a well-known environmentalist claimed on social media that many WhatsApp warriors, who ignored the proposed demolition and shifting have now, after "Some kind person (not me) found a solution and got BMC to agree to move the gate to another location (instead of destroying it) have started their Whatsapp war games."