Aaditya Thackeray says he is a target of 'mucky politics' 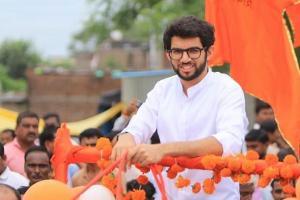 
With the Opposition Bharatiya Janata Party (BJP) pointing a needle of suspicion at him, Maharashtra Tourism Minister Aaditya Thackeray on Tuesday broke his silence on late Bollywood actor Sushant Singh Rajputs case, 50 days after his death.

Terming the allegations and ongoing whisper-campaign against him as ‘low-level dirty politics', Thackeray Jr. said that so far he has maintained restraint in the matter though he was "not connected to the case in any manner".

"Maharashtra government is making all-out efforts to combat the Coronavirus pandemic. Given the government's success and popularity, those who cannot digest it have started to play politics with Sushant Singh Rajput's case," Aaditya Thackeray said in a statement.

He said that disgruntled political elements were using unnecessary slander to target the Thackeray family as a whole and him personally, though he took no names.

"It is like licking off the ‘ghee' from a dead body, which is sickening. Sushant Singh Rajput's death is sad and shocking. I have absolutely no connection with the case," Thackeray Jr. said.

He admitted that since Mumbai is the capital of Bollywood, that is a source of employment for thousands of people, he enjoys excellent relations with many in the film industry, which "is not a crime".

Aaditya Thackeray added that the Mumbai Police and Maharashtra Police, which have a global reputation, are investigating the case in-depth, "but only those who don't have faith in the law are indulging in such scurrilous allegations to misguide the investigations".

"I wish to make it clear that I am the grandson of Hindu Hriday Samrat Balasaheb Thackeraya and I will never do anything that will sully the image of Maharashtra, Shiv Sena or the Thackeray family. Those making such cheap allegations must realise this," Aaditya Thackeray asserted.

He said if anybody has any concrete evidence in the matter, they should approach the police who will investigate it, but nobody should remain under the impression that they can succeed in ruining the image of the government or the Thackeray family by such mudslinging.

Rane is the latest entrant to the controversy with several other BJP leaders, including Leader of Opposition Devendra Fadnavis, and sections of Bollywood demanding a CBI probe into Sushant's case.

Next Story : Female form on signage a step towards inclusivity