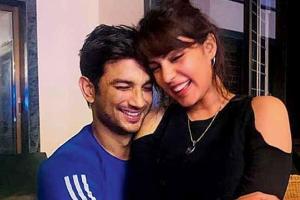 
The Enforcement Directorate (ED) officials are questioning Bollywood actor Rhea Chakraborty's Chartered Accountant Ritesh Shah here in connection with a money-laundering probe related to late actor Sushant Singh Rajput, officials said on Tuesday. He is being questioned about the finances of the companies owned by Rhea and her brother, the officials said.

The officials said Shah presented himself before ED officials at the agency's office here around 11.30 am on Tuesday for questioning. On Monday, the ED had questioned Sushant's Chartered Accountant Sandeep Sridhar in Mumbai about the financial transactions. The action comes in the wake of a case registered by the ED on Friday against Rhea and her family members.

The ED's money laundering case pertained to transactions totaling Rs 15 crore and were allegedly related to the 'suicide' of Sushant Singh. The development comes amid complaint by Sushant's father KK Singh to the Bihar Police against Rhea. The ED named Rhea and her family members in the case on the basis of an FIR filed by the Bihar Police.

The official said that the agency will summon a number of people for questioning in the case in the coming days. On Thursday, the ED had sought details of the police FIR against Rhea and details of two companies owned by Sushant and Rhea's family from the banks. The ED had also sought details of financial transactions of Vividrage Rhealityx, in which Rhea is a director, and Front India For World, in which her brother Showik is a director.

Earlier in the day, Bihar Chief Minister Nitish Kumar said that his government had recommended a CBI probe into the death of Sushant. Sushant's father had lodged the FIR against Rhea in Patna, accusing her of cheating and threatening his son. Sushant's family has also accused her of keeping him away from his family.