Can art engage with your local machchiwali, like it does with the well-heeled gallerist? St+Art's new Sassoon Dock Art Project shows how the barriers could slowly be broken 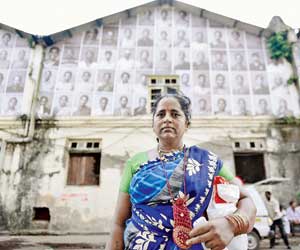 As the whir of a landing naval helicopter rips through the air, visitors saunter around the Sassoon Dock Art Project. It is the evening of a panel discussion by the magazine ART India, and a strange mix of visitors -- fishmongers, fishermen, labourers, gallerists, students, art consultants, among others -- are here. 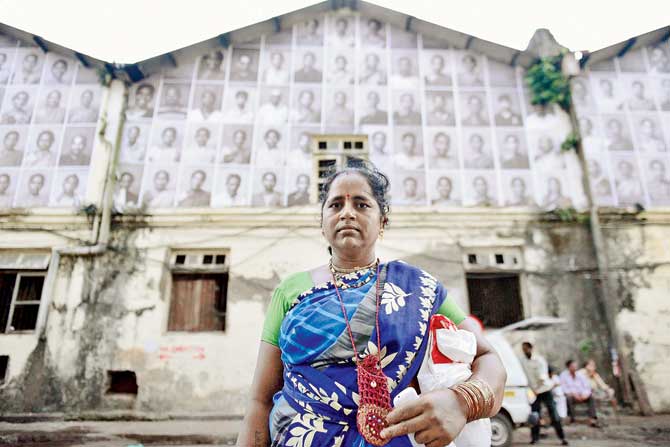 Anita, who sorts prawns at Sassoon Dock, is among the several people seen in the monochrome photo-grid by artists Pranav Gohil and Akshat Nauriyal (left).

This has been the case at Sassoon Dock, situated on the southern tip of the city, ever since the art project opened early in November. Famous for its historic association as the one of the oldest docks in the city and its fish market, and equally infamous for its stench, the character of Sassoon Dock has been transformed during the course of this initiative.

The team behind it, St+Art India Foundation -- a New-Delhi-based non-profit committed to bringing Indian and international artists to create public art in urban spaces -- has aptly used the tagline Art for All, for this project. 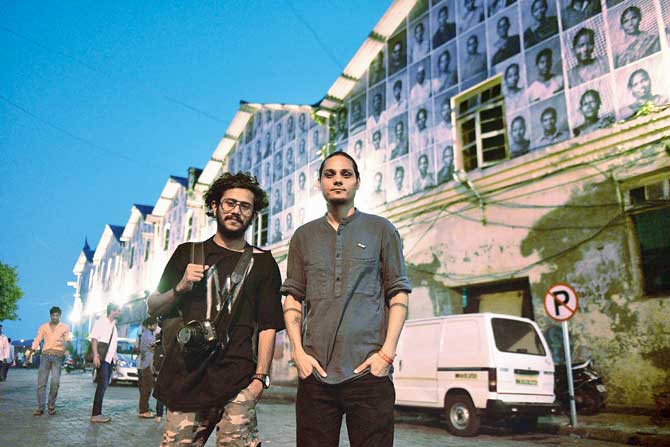 The tagline, says Giulia Ambrogi, is direct and simple, and highlights the main goal of the festival. "Art for All means bringing art where art is not supposed to be or meant to be. And, in any case, who decides these things?" says Ambrogi, who co-founded St+Art, along with Hanif Kureshi, Thanish Thomas, Arjun Bahl and Akshat Nauriyal in 2014.

Building bridges
The art festival, which has seen the support of Asian Paints, the Singapore Tourism Board and foreign embassies, is set to spread out to other parts of the city as well. This week, a collaboration with haute couturier Manish Arora will be flagged off at Jindal Mansion. This Peddar Road address belongs to Sangita Jindal, who through the social development arm of steel conglomerate, JSW, has supported 10 Indian artists, who are part of the festival. 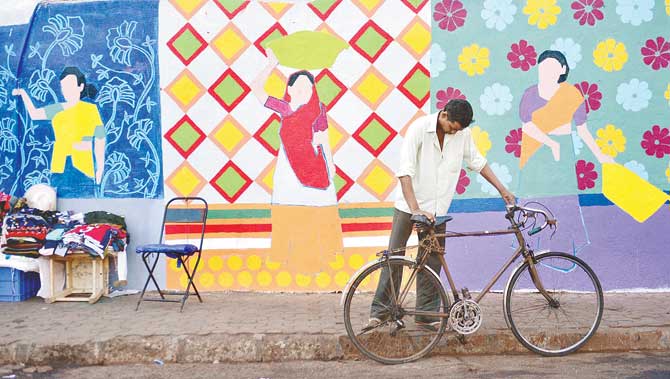 On the other end of the spectrum, last week, the project began work in Mahim East, known commonly as Dharavi. Initially intended as the first public art gallery in the city, this part of the festival has reportedly met with considerable roadblocks owing to delayed permissions from the civic body. Around 10 artists, who were supposed to paint the walls of a colony in Shahu Nagar, Dharavi, left the city by the time permissions could arrive. Despite these issues, the choice of venues communicates St+Art's interest in building a bridge across communities divided by class.

Abhay Sardesai, art critic and editor of ART India, believes that the festival has opened up opportunities for different kinds of practitioners and a mixed audience. "Artists occupy distinct positions as far as the pecking order is concerned. There is a hierarchy, a kind of a class system, and it needs to be questioned. The Sassoon Dock Art Project succeeds as there is an insistence on inclusivity. There are artists of different kinds -- artists who rely on craft-based processes, artists who are activists, artists who may not be considered kosher enough to be shown in a gallery for perfectly legitimate reasons. An event like this can become a bridge between gallery and public artist," he says. 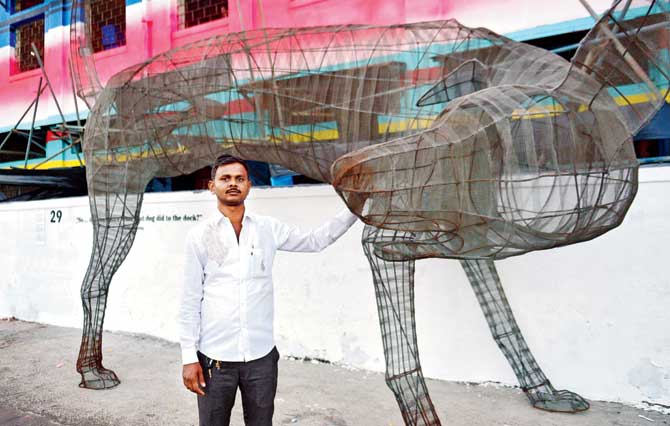 Seriously street
The phrase "street art" may often draw the condescension of the serious gallerist and the fine-art lover, and Ambrogi is aware of the prevalent attitude. "Eventually, what we do is contemporary art. I am against labels. The street is the chosen medium for these artists, some of whom show in galleries across the world," she says, drawing attention to the organisation's logo -- it's street plus art, not street art.

The association with Jindal, president of ART India magazine, has provided the festival with a natural connection to the gallery community, says Ambrogi.

For the people
With every passing festival, St+Art's identity keeps evolving, and for the better. Now in its seventh edition, and its second in Mumbai, St+Art knows its shortcomings. Last year, at South Delhi's Okhla, the largest dry port in Asia, the St+Art festival used industrial containers as canvases, creating a massive layout of murals and installations. The project was criticised for not responding to its context amply and not engaging with the labourers there.

This time around, at Sassoon Dock, in order to bring out the community context as much as possible, Ambrogi says that St+Art researched local tales and mythologies of the sea-faring and fishing community that uses Sassoon Dock for its livelihood. "We also printed flags in Devnagri stating Art for All, which were flown on the fishermen's boats and the dock," says Ambrogi. 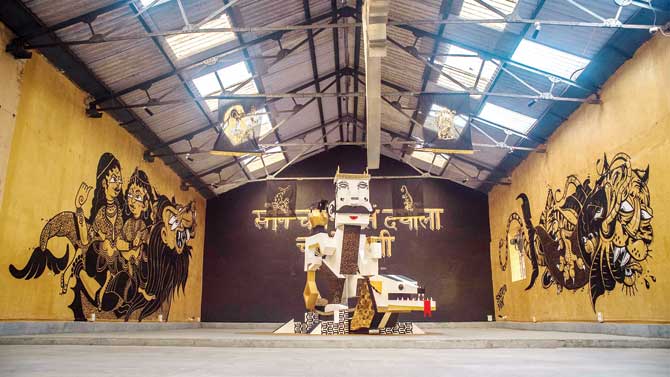 For the locals, who work in the area, the festival is the new face of an area that has been in controversy in recent years. The dock is set to be revamped by the Mumbai Port Trust as a modern fishing dock with a museum. The plan has been reportedly stalled due to internal arguments fishermen groups.

A year ago, the St+Art team scouted the dock, sought the help of Pawar and his peers, but saw that bringing in an art project wouldn't be possible without first sprucing up the place. "Using the space was a big challenge. It was smellier than it's now, with dead fish lying around and the buildings falling apart," says Ambrogi.

Fish auctioneer Sandeep Mhaske, 33, says he has always been proud of Sassoon Dock, but after the festival, even more so. "I never thought that a festival like this could happen here. I have been to the Kala Ghoda Festival, but this is different. Here, there are artworks inside a building, too," says Mhaske. His top pick from the festival is Plastic Ocean by Singaporean artist, Tan Zi Xi, a favourite with other visitors, too.

"We know what public art is when it comes to walls, but what about an indoor space? Can we keep it inclusive and at the same time enter the spectrum of legit contemporary art in India?" says Ambrogi. The scale of the fest's interior spaces for St+Art has been marvelled at by visitors, especially gallerists, many of whose spaces are just a few miles from Sassoon Dock. Gallerist Arshiya Lokhandwala and Sardesai estimate that such interiors, high ceilings and the industrial appeal, will surely capture the imagination of artists and gallerists in a city where real estate, especially for art, comes at a premium. Among the visitors, there are those who say that the festival was much like a mini-biennale, in both its scale and the production quality.

But, engaging an entire community, in not just the production of art, but the actual creation of it, is an ambitious task. Take the case of Anita, a fisherwoman who sorts prawns at Sassoon Dock. Her portrait is among the several pasted across buildings en route to the fest. Part of the Inside Out global project by French artist JR, the monochrome portraits by St+Art co-founder Nauriyal and Pranav Gohil are homage to the diverse communities, who work there, but have no occupancy rights. Their photo-grid throws the voyeuristic gaze back at visitors -- we may look at the people on the docks, but only after they look at us through their Bollywood-style portraits. This way, we are in fact welcomed into their turf.

Looking at her portrait, Anita says that while she doesn't understand the Inside Out project, she is excited about it. Dhanraj G Pawar, chairman of the Jai Sevalal Sassoon Dock Asanghatit Kamgar Sanghtana, is positive that it's a good move. This community leader of the Banjaras who work here, Pawar says, "Look at these large photos. We are here to say that this place belongs to us and we are looking at you."

But, not everyone seems impressed. An artist, who did not wish to be named, says, "What does this art festival mean to the people who work here? Do they have a say in that? Their space doesn't look like their space anymore. Maybe, the fact that Sassoon Dock was unknown, in the stench and the filth, was a good thing."

Next Story : Andheri skywalk audit: This Mumbai walkway is dirty, dangerous and encroached