Why all this after 2.5 years? Shiv Sena workers ask Eknath Shinde camp 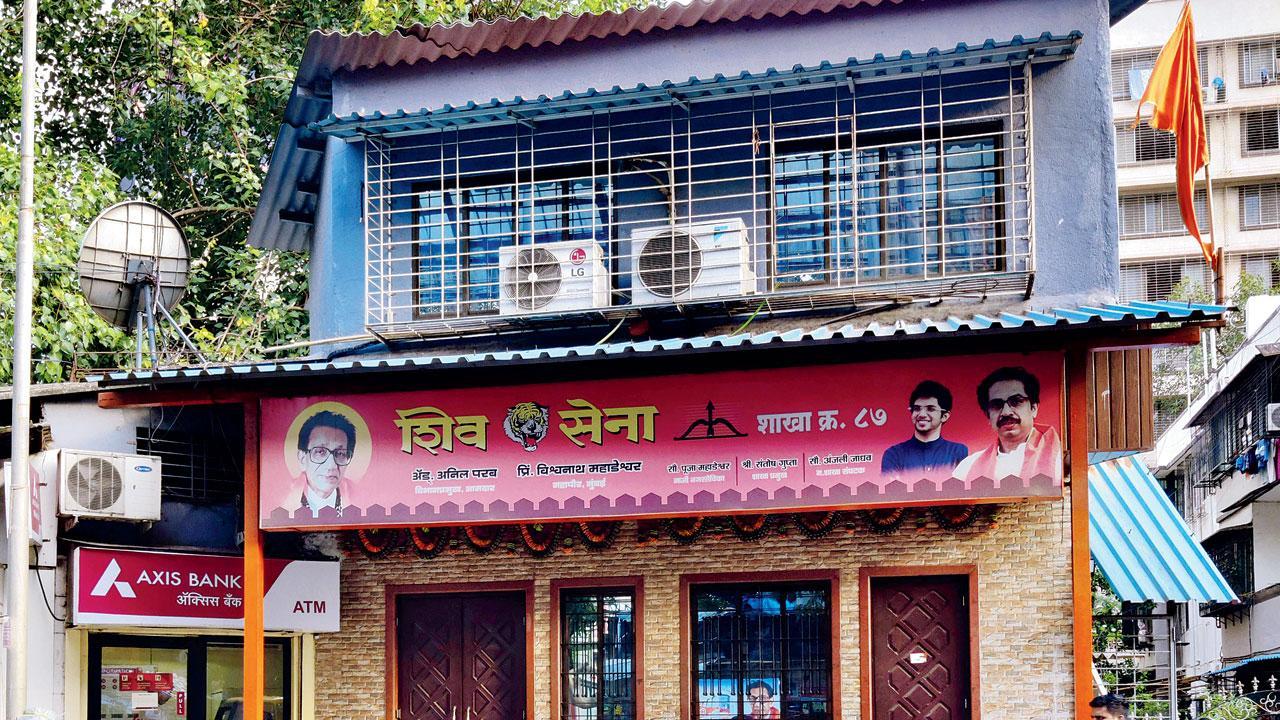 Like this Sena shakha at Santacruz East, the party’s offices across the city were either shut or lacked their usual energy on Thursday. Pic/Nimesh Dave

With the wheels threatening to come off the ‘rickshaw’ government, a disparaging label given to the Maha Vikas Aghadi (MVA) by its detractors, local leaders, Shiv Sena shakha pramukhs and hardcore Sainks are seething at what they think is a treacherous breakaway.

As they vowed to side with the Thackeray family, they had one question for the Shinde camp: why all this after 2.5 years? On Thursday, Shiv Sena shakhas and offices of party leaders in the Dahisar-Borivali belt bore a deserted look except for heavy police presence. 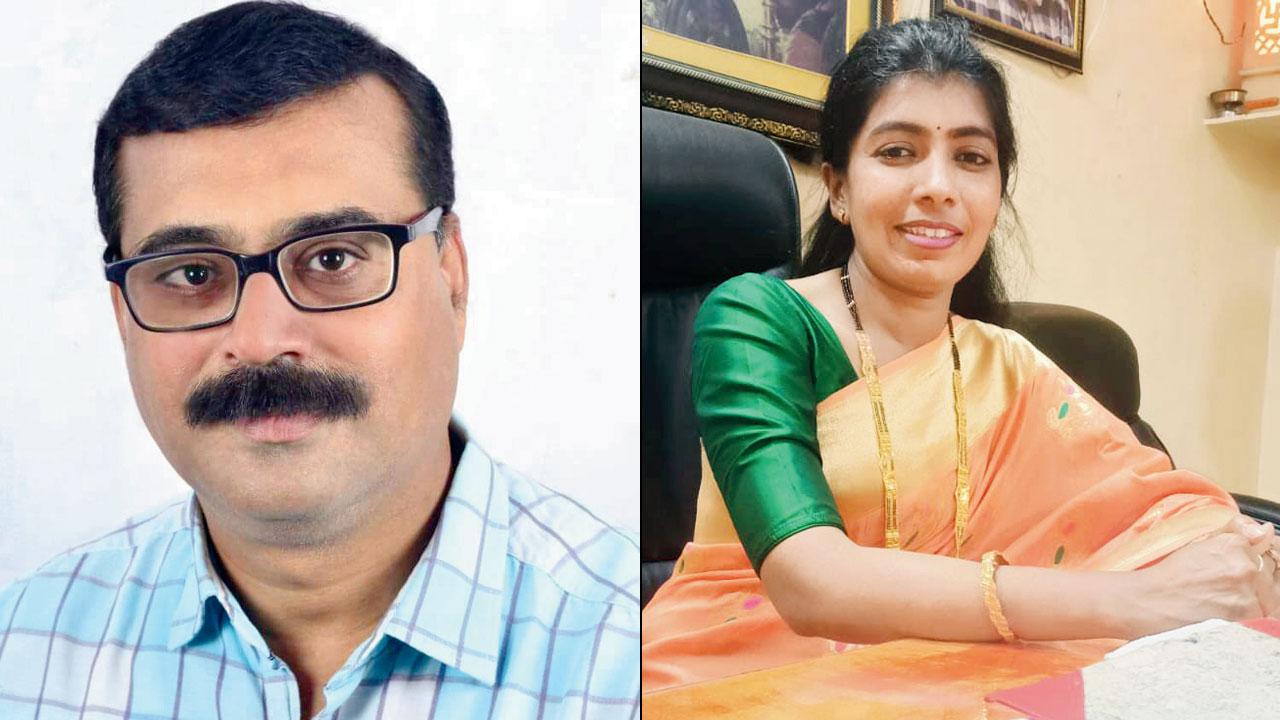 Abhishek Ghosalkar, former corporator from Dahisar and son of Sena ex-legislator Vinod Ghosalkar, portended that one should not be misled by the on-ground calm.  He said, “This is the lull before the storm. We Shiv Sainiks work at a ground level with and for the people. We are not scared of backstabbers and those who are trying to take over the Sena. That will never happen. We have and will always support the Thackeray family. We were never greedy for power.”

Local Sena worker Bala Patil at Rawalpada, Dahisar, said, “We are not going to make this a law ‘n’ order situation. This is for unity and support for Uddhav Thackeray. People of Maharashtra are with us.” Bhagwan Arekar, aide and mobiliser for rebel MLA from Patan Shamburaj Desai, said he has severed ties with his boss and stands by Uddhav Thackeray.

“What Shinde and these MLAs have done is wrong,” said Arekar, adding Thackeray did a lot for Desai. When the Hindutva question reared its head, Arekar said, “I agree the Sena has moved away from its core Hindutva agenda, but what were these people doing for 2.5 years? Were they blind? Did they not know this before? Their real grouse is that they have been sidelined in favour of a select few close to the family.” 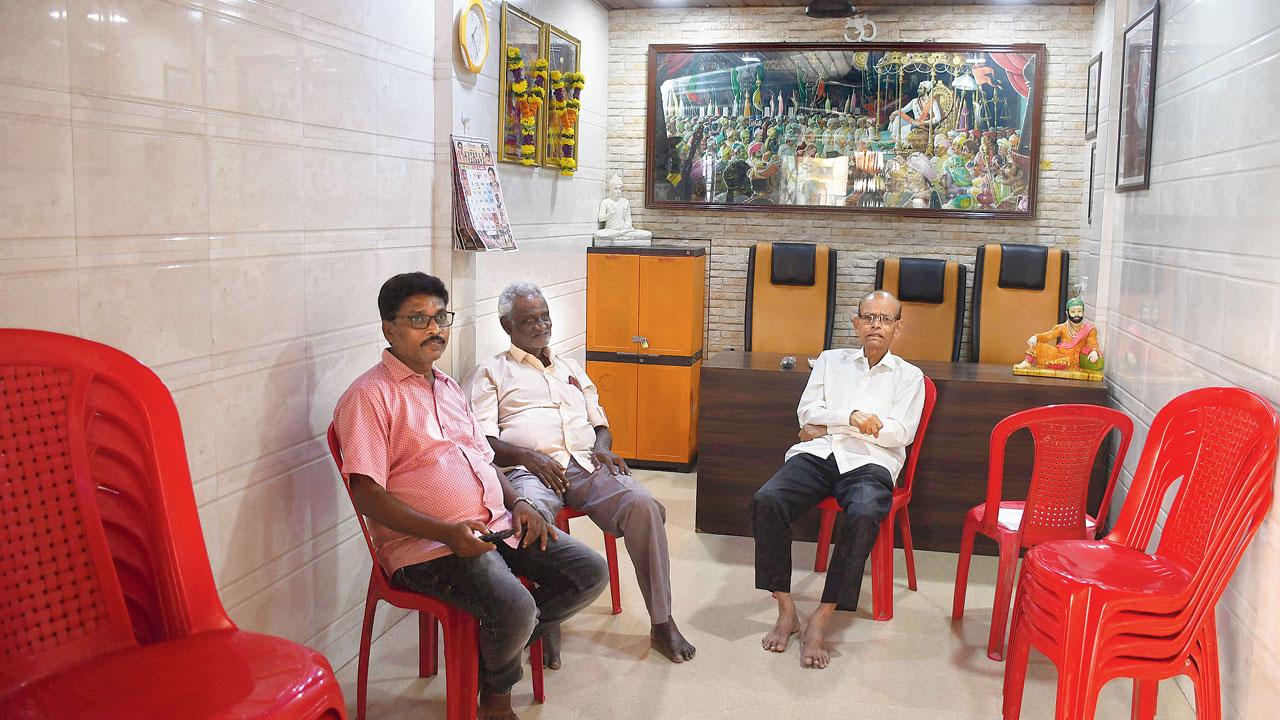 The usually bustling Shiv Sena shakha no. 198 at Lower Parel bore a sombre look on Thursday

He did say though that the rapid rise of Aaditya was unfair. “Uddhav Thackeray should have given him a smaller post and let him grow slowly,” he explained. But he reiterated there is no sympathy for the rebels. Arekar said, “It will still be good if they return quietly.” He also said he thought the rebels did not have much of a future in the BJP.

While Arekar struck a combative note, Krishna Hegde, ex-Sena MLA and secretary of Bharatiya Kamgar Sena, has seen rollercoaster politics. “Ever since I was in the seventh standard, since I was born into a political family. I have campaigned for the Congress in the ’70s as a young man, as a little boy I remember sticking political posters as elections neared with wheat, as there was no glue!”

Contesting and winning college elections, Hegde joined the Congress and then went to the BJP before finally joining the Sena nearly 1.5 years ago. “Even with so many years in politics, I say what is unfolding currently is very unfortunate. There was always room for dialogue.” 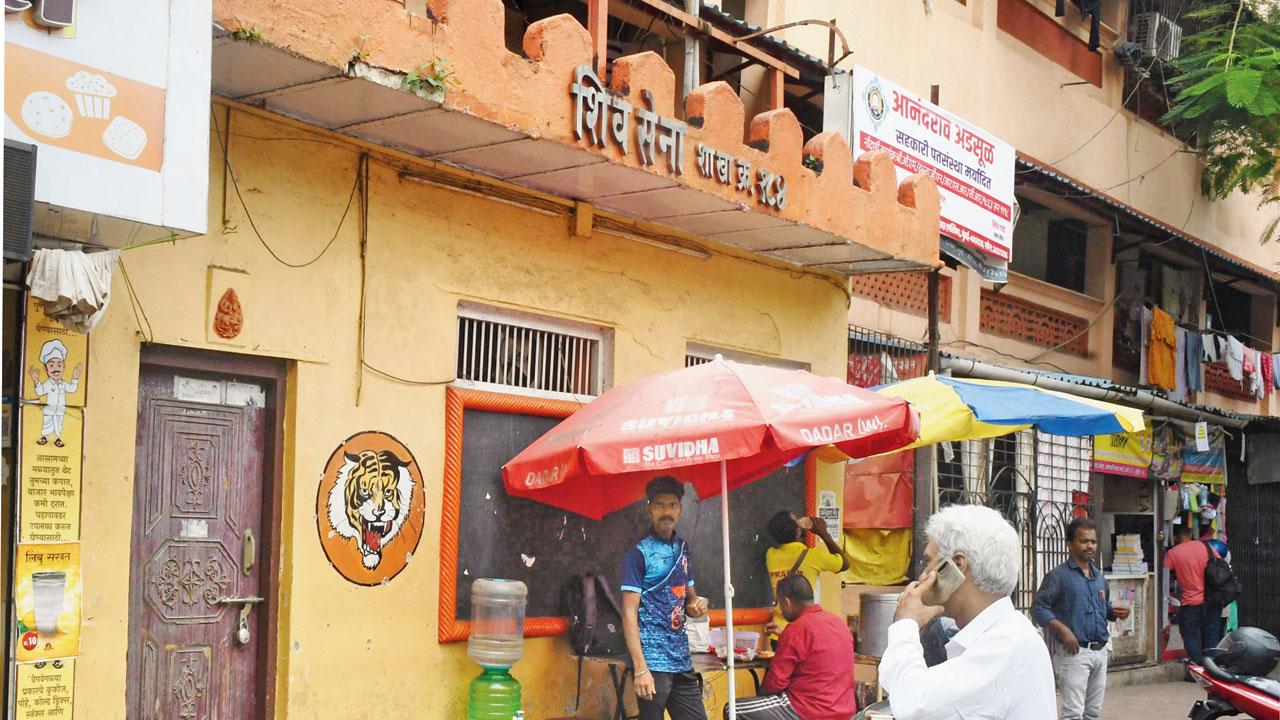 Shakha no. 184 at Dadar. Pics/Ashish Raje

Hegde said key takeaways from this crisis for him are philosophical. “It has cemented my belief that in politics, everybody retires hurt. Even if you have had an illustrious career, you may be hurt because your leadership, your cadre may have let you down. It is certainly not a bed of roses. People have this notion that politicians are extremely thick-skinned, but that is not always true. When things go well, people treat you like a God, you are a superhero, when they do not, you are accused of all sorts of things, even those you have not done.”

Wednesday’s flood of Matoshree visitors had dialled down somewhat on Thursday morning though some Sena leaders still showed up to meet Chief Minister Uddhav Thackeray.  In the afternoon, senior leader Dagdu Sakpal, former Shiv Sena MP from Aurangabad Chandrakant Khaire were at Matoshree to meet the CM.

A group of Sena workers outside Matoshree were overheard discussing that it was difficult for them to digest the fact that no senior leader in MVA was aware of a massive rebellion that might have been brewing. “It is shocking that so many MLAs reached Surat by road and the home department was not aware,” said a Sainik who did not want to be named. 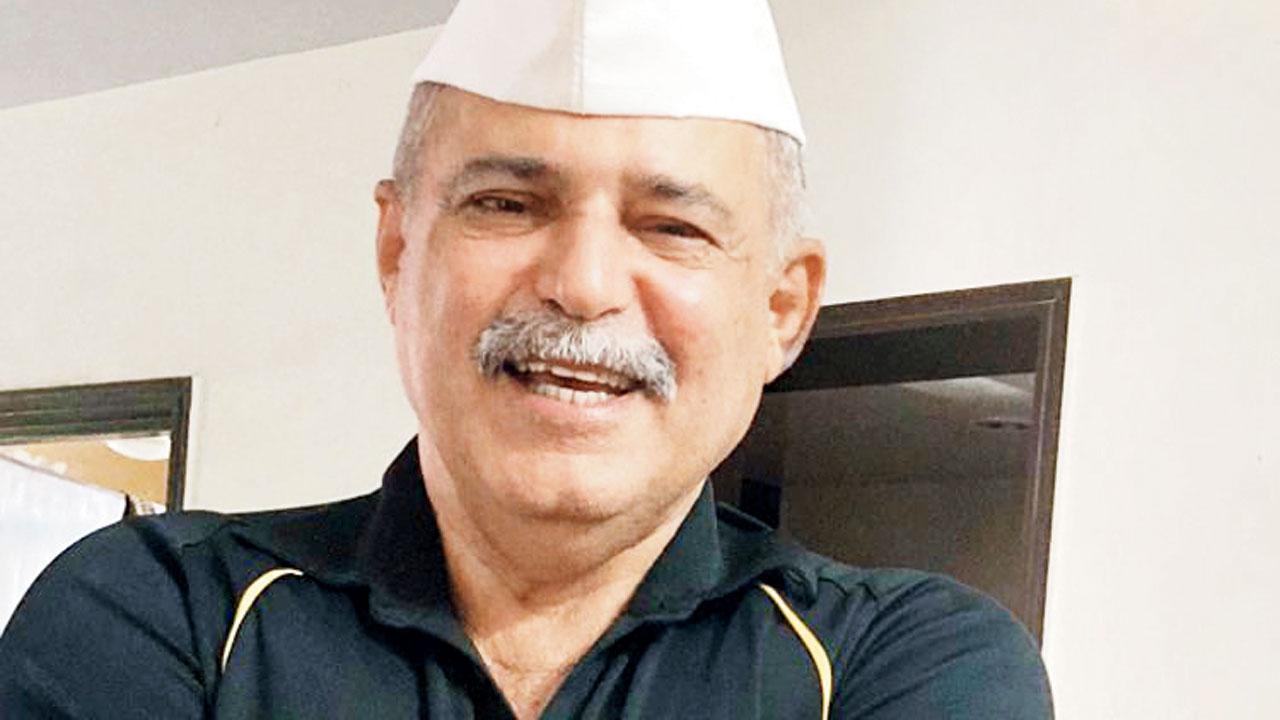 Kilometres south from Matoshree in Colaba, Pervez Cooper, a Sena inductee for two years who describes himself as an “ordinary Shiv Sainik”, looked at the extraordinary goings-on with a mix of pain and some pride. “The pain is obvious and the pride is because of the dignified way in which Uddhav Thackeray made his exit from Varsha. This is in contrast to so many politicians who simply want to stick to their chairs. Even though backstabbed, he is a man of principle.”

Silence is golden said many Sena karyakartas in Thane, deflecting questions with, “we are doing our routine work”. Former shakha pramukh Anand Sawant at Mulund (E) said, “We are with Thackeray and Matoshree. All karyakartas are with Uddhav Thackeray. We were at Matoshree yesterday.” Ram Tondwalkar echoed the sentiment: “Shiv Sena is the party of the Thackerays and not that of others.” While the Ghatkopar Shiv Sena shakha was yet to open when mid-day visited the place,  former corporator Tukaram Patil espoused similar support.

Sujata Sanap, a former Sena corporator, was fiery. She said, “Whatever our senior leaders decide will be final. However, I do not buy explanations that are being trotted out that Uddhav Thackeray did not have the time to talk to people in the party or they felt insulted. He managed COVID wonderfully, making our state within the top 5 for COVID management. He has treated all with respect, he used to answer the media like family, so how could he have ignored intra-party persons?” asked Sanap from SoBo. The unfolding crisis has filled Pramod Sawant, a Shiv Sainik, with a mix of hope, anger and sadness.

“Uddhav Thackeray gave Eknath Shinde everything, so why has this happened? We are so surprised. False statements and reasons are being bandied about. Shinde and Thackeray were close, they could have talked about any problems. I want to ask why did this scenario crop up only now?

We are awaiting answers.”

An emotional Sandeep Chivate, Matunga shakha pramukh, had some strong last words. He began, “Do not do this to Uddhav Thackeray. He is a decent, dignified man. I have been with the Sena for more than 30 years. I still remember the slogan given by Balasaheb Thackeray then which resonated across Matunga: ‘hatao lungi, bajao pungi’.”

Talking about Hindutva, he said, “When Babri Masjid fell, it was not the BJP but Balasaheb who said ‘even if one of my karyakartas has participated in this, I am proud’. We also had the slogan: ‘garv se kaho hum Hindu hai’. The BJP will use and eventually discard the rebel MLAs and others. Shiv Sena is an absolute institution, it has withstood many seismic tremors and shocks. It will come out stronger.”

Next Story : Maharashtra: Political unrest puts push for self-redevelopment on the back burner