Thanes leading developers - Puraniks, Thane Unlock 4.0 launched thoughtfully during the pandemic and to create positivity in the market 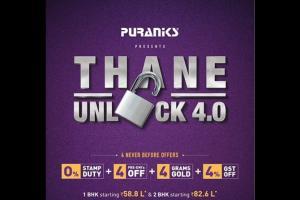 
A month back, Thane's leading developers - Puraniks, launched a unique and disruptive campaign for home buyers in Thane. Since then the campaign, Thane Unlock 4.0, brought not just unprecedented interest and leads but clutched hope from the jaws of gloom and sold homes to prospects in the right spirit of buying them – positivity.

The pandemic has hit the general lives and aspirations of people, hard. Minor extravagance and major lifestyle decisions have been postponed and have further put a further dent in the economy. Real Estate is facing the brunt of it all. This campaign brought hope, cheer and sales for Puraniks and the industry, where several other projects have been hit hard due to the pandemic.

Thane Unlock 4.0 comprised of four unbeatable value propositions across 4 fabulous projects from the group. Having struck the right note with the prospects looking for a home in Thane, the company is confident of maximizing walk-ins and with the overwhelming response so far, Puraniks are expecting record sales, in this festive season.

"We are elated at the success of Thane Unlock 4.0 launched thoughtfully during the pandemic and to create positivity in the market. When our partner marketing agency, Alchemist, incubated this campaign, the city of Thane was under a partial lockdown. People were looking forward to another unlock after the first 3 already declared. We wanted to intrigue the consumer with something which was relatable and contextual during these times and no other alternative seemed as apt. The word "Unlock 4.0" would act as a perfect antidote to the negative environment and to encourage prospects to buy their own home. Considering the waiver in Stamp Duty chargers and distress amongst consumers, the campaign focused towards pushing great offers to consumers" said Shailesh Puranik, Managing Director, Puranik Builders.

COVID-19 has once again pointed towards the need to provide for security, a safe abode and a sound investment backup. Our campaign bolstered the consumer sentiment, genuinely offered relaxations and discounts which mattered and offered a solution. The rest as they say, is history. Additionally, hopefully, we will create some history here."

The projects under the scheme are situated in the heart of Thane. They are Puraniks Tokyo Bay, Rumah Bali, City Reserva and Grand Central they enjoy easy connectivity to different parts of the city and the MMR and have the backing of the prestigious Puraniks brand. Puraniks City Reserva and Puraniks Grand Central recently also launched 2 new towers, which are also under this iconic scheme, "Thane Unlock 4.0".