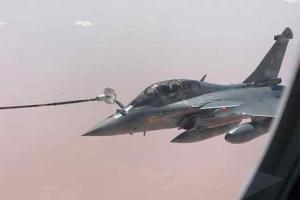 
The first five of a batch of French Rafale fighter jets landed at Ambala air base in Haryana on Wednesday, after covering a distance of nearly 7,000 km to join the Indian Air Force fleet.

Chief of Air Staff RKS Bhadauria is at the Ambala air base to receive the Rafale jets. Water salute will be given to the five Rafale fighter aircraft.

The fleet, comprising three single seater and two twin seater aircraft, will be part of the No. 17 Squadron of the Air Force, also known as the ''Golden Arrows'.

In a series of tweets, Defence Minister Rajnath Singh said, “The Birds have landed safely in Ambala. The touch down of Rafale combat aircrafts in India marks the beginning of a new era in our Military History. These multirole aircrafts will revolutionise the capabilities of the @IAF_MCC."

The Birds have landed safely in Ambala.

The touch down of Rafale combat aircrafts in India marks the beginning of a new era in our Military History.

These multirole aircrafts will revolutionise the capabilities of the @IAF_MCC.

A video posted by the defence minister on Twitter showed the first of five Rafale fighter jets landing at Ambala air base. The 27-second video opens with a shot of the runway with the sound of the Rafale's powerful engines.

India finds itself stretched between the borders with China, where it is locked in an intense standoff, and also with Pakistan, where it is countering incessant cross-border firing from a hostile Pakistan army. Rajnath Singh also said that those who want to threaten India's territorial integrity should be worried about the new capabilities of the Indian Air Force.

I would like to add, if it is anyone who should be worried about or critical about this new capability of the Indian Air Force, it should be those who want to threaten our territorial integrity.

The minister also said that the Rafale jets were purchased when they fully met the operational requirements of the IAF. He also rebuffed allegations of getting the Rafale jets by paying dearly to France.

He said, "The baseless allegations against this procurement have already been answered and settled."

Earlier, Rajnath Singh had tweeted that the "birds" had entered the Indian airspace.

The five Rafales escorted by 02 SU30 MKIs as they enter the Indian air space.@IAF_MCC pic.twitter.com/djpt16OqVd

The last foreign fighters inducted into the Air Force were the Sukhoi-30s from Russia which have now become the mainstay of the Air Force after multiple orders in view of delays in placing orders for new western aircraft.

After landing, the pilots led by Group Captain Harkirat Singh would meet the IAF chief and brief him about their flying and training in France. The formal induction ceremony of the aircraft would be held later.

Next Story : Cop suspended after man dies by jumping off police vehicle