Capt. Satyam Thakur: A Genuine Inspiration for many during Pandemic

Satyam is popularly called, "Satyam Bhai" by his fellow villagers. He has carved his own niche in youth leadership and is one of the beloved leaders of them 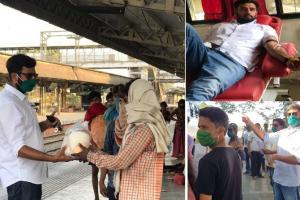 The Covid-19 has taken a toll on every one of us. The situation is becoming worst during each passing day. The underprivileged are the ones who are most affected due to lockdown. Government is making all the possible ways to get solace for these peoples. Many NGO’s, Celebs as well as kind-hearted people are serving the needy people. One such brave heart, benevolent is going out of the box to serve the poor’s. Yes, he is none other than Capt.Satyam Thakur!

They say, "He who gives, gets Twice!" Cpt. Satyam is delightfully serving the migrants and certainly making our country proud.

Coming from a well-educated family from Vangaon in Palghar district, Maharashtra, Satyam at a very young age was fascinated towards Rajeev Gandhi thoughts. He completed his schooling from Dahanu (Maharashtra) and further moved to the United Stated for his Flying training . After the completion, he has served as a commercial Pilot .

Achieving such a great success was truly a proudest moment for his family and villagers too. But Satyam is a son of soil, who roots are stuck well to his beginnings. He considers his own people as his true wealth. Rather than making money overseas, he returns back to his motherland to serve his own people.

Satyam is popularly called, "Satyam Bhai" by his fellow villagers. He has carved his own niche in youth leadership and is one of the beloved leaders of them.

Other than being a trained Pilot, Satyam is also a President of Indian Youth Congress of Palghar District. Under the guidance of Mr. Satyajit Tambe, State President of IYC, Captain Satyam is kindheartedly serving & helping his people out of the core.

Captain Satyam: Real hero – Real Soldier against the Pandemic.A massive group of migrant labourers reached vangaon. When Satyam Thakur came to know about the tough situation of migrants, he adopted the several laborers and their families. They lived with him like family , provided with meals they stayed with him throughout the lockdown and he also arranged for buses and trains to their respective States.

He was approached by the migrant laborers from Jharkhand stuck near Boisar which is very close from his village Vangaon. He immediately communicated with both the state Governments of Maharashtra and Jharkhand and managed a safe & smooth travel for the migrants to their home.
In his village, he saw there are many who cannot afford a single meal every day. He took utmost care of several families and arranged a Jeevan Package of essential food items which will last till 30 days and shall be refilled thereafter.

Satyam being a disciplined Pilot is also maintaining the cleanliness and following the social distancing norms at its par. He is also spreading awareness amongst the villagers to maintain hygiene and health while serving meals to the migrants.

A blood crisis situation aroused in the state wherein Satyam selflessly helped in mobilizing blood donors to the hospital by taking 5 donors at a time to 25Km far hospital. Also for the pregnant ladies, he welfare of his own countrymen!

Next Story : Rescue video of sloth bears who had fallen in well wins internet!