Down with the fitness

Hello and welcome to another chapter of my life’s single largest on-going failure: the fight to get fit 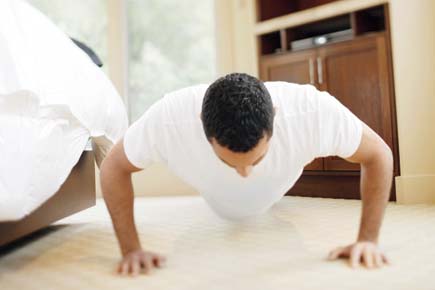 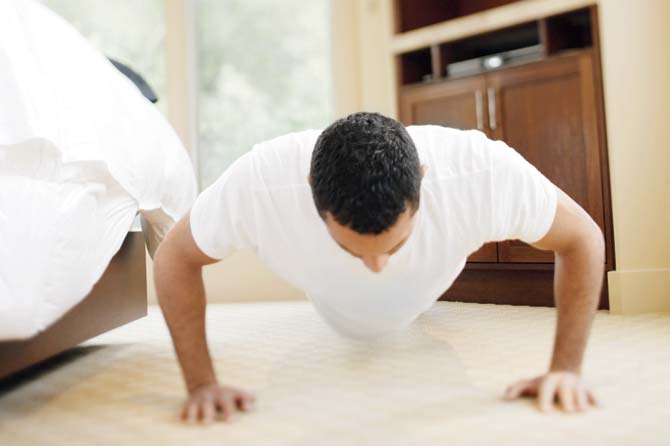 Every workout follows the exact same pattern: from “Ten push-ups? I can totally do that” to “Goodbye limbs. It was nice having you”. Representation pic/Thinkstock

However, I am now thirty-two and deeply aware of the fact that I am fighting my ageing metabolism. Also as a Gujarati, there are two things that my lineage has a history of — diabetes and tax-evasion. And working out regularly usually staves off the former and makes it easier to run when you’re caught for the latter.

The good news is that I learn from my mistakes. The last six times I tried my hand at fitness, I joined gymnasiums. I’ve realised now that this was a terrible idea because getting fit at a gym is contingent upon me going there. And as anyone who has tried to get fit knows, working out doesn’t require energy; mustering the strength, will and drive to go to the working-out place does.

I’m not saying I’m lazy about going to the gym, but the last time I went to one, it had been so long since my previous session that the place had (and I am not making this up) shut down, renovated, and re-opened as another gym. So this time I’ve wised up and cut out the middleman; I’ve hired the services of a fantastic studio that sends trainers to my house every morning. You can’t make excuses about going to the gym when the gym is reading the paper in your living room every morning. (Vicky, if you’re reading this right now, I’ll be out in five minutes, I swear.)

“Ooohh, stretching is nice”
“Hey, this warm-up seems easy”
“Vain attempt to hide panting sounds”
“Ten push-ups? I can totally do that”
“Burpees? LOL, what a dumb name, I bet it’s stupid.”
“F**k burpees.”
“Goodbye limbs. It was nice having you”
“Seriously f**k burpees”
“Hnnnnnnnnnnnnngggghhhh”
“Hold me ma, I’m so cold. So, so cold…”

Occasionally, my trainer will say things like “Super, man!” and I’ll feel good about myself, until I realise he’s just naming another exercise that involves lying on your stomach with your hands and feet in the air, like Superman in flight. However, I am fully confident that unlike the last six attempts, this time I’m going to stick with my workout regimen. This is partly because I’m extremely non-confrontational and cannot tell the trainer to leave my house after he’s showed up, and partly because “He died because his pancreas exploded during a burpee” sounds way more badass than “He died of sugar”.

Rohan Joshi is a writer and stand-up comedian who likes reading, films and people who do not use the SMS lingo. You can also contact him on www.facebook.com/therohanjoshi

Next Story : Why should taxpayers fund FTII?