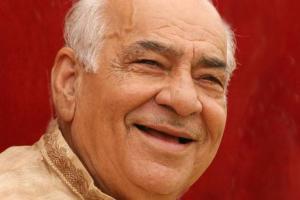 Khurana, who served as Delhi Chief Minister from 1993 to 1996. resigned amid controversy in relation to the hawala scandal. He is survived by his wife, a son and two daughters. "He breathed his last at around 11 pm at Kirti Nagar residence here," his son Harish Khurana said. He said that his father was suffering from a chest infection and fever from the last few days. "He was feeling breathless since Saturday morning," Harish Khurana said

Born on October 15, 1936, Khurana also served as Parliamentary Affairs and Tourism Minister in Atal Bihari Vajpayee government. He was appointed Rajasthan Governor in January 2004. However, he resigned from the post and joined active politics in October 2004. The four time MP also served as the Delhi chief of BJP unit and was also former national vice president of the party.

Prime Minister Narendra Modi condoled the death and said, "Anguished by the passing away of Shri Madan Lal Khurana Ji. He worked tirelessly for the progress of Delhi, particularly towards ensuring better infrastructure. He distinguished himself as a hardworking and people-friendly administrator, both in the Delhi government and Centre."

BJP President Amit Shah condoled the death and said: "The news of passing away of former Delhi CM and senior BJP leader is very saddening. Khuranaji was an ideal swayamsewak, a dedicated student wing worker and he shall be always remembered as a strong pillar of the Jana Sangh and the BJP."

Union Minister Harsh Vardhan also condoled the passing away of Khurana."My heartfelt condolences to the BJP parivar and the family of our beloved former Chief Minister of Delhi and veteran BJP leader Madan Lal Khuranaji who passed away after prolonged illness," Vardhan tweeted.

Union Textiles Minister Smriti Irani also condoled the death said: "Saddened by the demise of Madan Lal Khuranaji. As an elder he was a guide with an ever supportive outlook and kind words to spare. My condolences to his loved ones."

Cremation will take place on October 28.