My name is Khan - with emphasis on Kh

These are the very qualities that a corporatised Bollywood claimed to supplant with a 'superior', very middle-class cinema, sanitising this aesthetic away 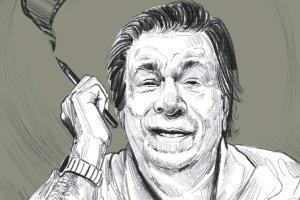 Many have said Kader Khan's death marked the passing of an era, but in truth, that era passed long ago. Kader Khan was an inescapable presence of Hindi cinema in the 1980s and '90s. His successive collaborations with directors and actors, created definitive, masculine protagonists: a sentimental Amitabh Bachchan, transitioning out of his working-class hero avatar; a neo-middle-class Jeetendra; a tapori Govinda. It was also Hindi cinema's least elite time.

While today, a kind of laddish, ironic nostalgia might hark back to those films, their vulgarity, stereotypes and casual misogyny and a not-always consistent control of loudness cannot be denied. These are the very qualities that a corporatised Bollywood claimed to supplant with a 'superior', very middle-class cinema, sanitising this aesthetic away.

What this process stripped from films was an entire set of textures, accents, body types and implicit social histories that inhabited the screen. We can critique the poor scripts of older films, the predictable set pieces, the phalanx of stereotyped minor characters, cabarets and mujras, sidekicks and siblings. But for all that was discomfiting, the privileged and the marginalised identities cohabited in a single frame, reflecting some tensions of social reality. Plumper bodies, darker skins, body hair, different body languages were present. Today, all bodies onscreen are homogenised with a gym-made patina. Along with our gated communities and multiplexes, in the Hindi film, too, our encounter with difference is highly segmented.

Today, Muslim characters are usually seen in stories of communal conflict, not simply present with others, with notable exceptions (Zero, Zindagi Na Milegi Dobara). Older films had a casual Muslimness not through characters, but what Mukul Kesavan has called the Islamicate in Bollywood, a texture that drew on Urdu poetry, language, writing and cultural forms from the heterogenous world of Urdu to shape the linguistic and sensory character of Hindi films. Kader Khan punctured the genteel quality this had acquired, however; its shayari-gharara-chilman aristocratic affectation. He brought a working-class slang, which retained the love of language but with a street-swag excess. It was without shame about its origins, without restraint in its energy : many words, several similes, stacks of jokes, rudeness, stylized exaggeration, irreverence, silliness, sexism. It drew on slapstick and low-brow, bawdy forms of entertainment. It was an exploding guldasta of cheerful farce.

What we have foregone now is the celebration of an Indian artifice: from the sensual emotionality of a lip-sync song to the absurdity of a joke that is dizzyingly topped three times with ridiculous metaphors. This jam-packed aesthetic allowed for a release of emotion, laughter and enjoyment entirely with the body. And yet, you'd have to be a very particular kind of fool to take this kind of crazed absurdity earnestly. I guess the kind of fool who needs an aesthetic of realism as proof of seriousness, or politicalness, or artiness.

We accept today, the self-conscious artifice of an uneven film like Andhadhun, rooted in the physicality of French farce, while shuddering at the desi artifice of earlier cinema. It's an ethnic cleansing of an ornamental, desi style, enjoyable in the same way as a boisterously overloaded Royal Falooda (there's always one thing you don't like in that melee of jelly, vermicelli, sabza and rose — I hate the kajus), swept out along with those pleasurably epiglottal kh's and gh's and z's that over-decorated Kader Khan's dialogues.