Photography of Rafales banned ahead of landing

The order said the air base is surrounded by villages including Dhulkot, Baldev Nagar, Garnala and Panjokhara and National Highway 1-A 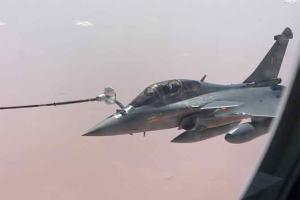 
Hours ahead of the landing of five Rafale aircrafts in an air base in this town of Haryana, the local administration has imposed prohibitory orders, banning photography of assets and Rafale aircrafts, and beefed up security. These prohibitory orders will be in force throughout the day, even barring mediapersons to capture videos and photographs of the Rafale aircraft. "Movement of anti-social elements in the vicinity of the Air Force station and mediapersons taking photographs from houses in adjoining villages during the event cannot be ruled out. It will endanger security," an order said.

To ensure security of the Ambala air force station is of paramount importance since the Rafale aircraft will be inducted here, it said. The order said the air base is surrounded by villages including Dhulkot, Baldev Nagar, Garnala and Panjokhara and National Highway 1-A.

"In exercise of the powers vested in me by virtue of Section 144 of Code of Criminal Procedure, 1973, I do hereby prohibit photography of any assets of Air Force station Ambala on July 29 from dusk to dawn with immediate effect," said the order, signed by the district magistrate. A Defence Ministry statement said a formal induction ceremony of Rafales will be planned later.

"The requirement now (July 29) is to ensure that the pilots and ground crew put their heads down and become integrated with the overall IAF operations at the earliest. "Hence it is in the best interest of the country, the IAF and the crew involved that they are kept away from media glare at the moment," said the statement.

"It is essential that the ferry-in of fighters as well as move of support crew is completed safely and swiftly for which the Station Authorities are required to devote their undivided attention to the mission at hand," it added.

Next Story : Chapter on Tipu Sultan dropped from class 7 textbook in Karnataka