Time capsule to be kept 2,000 feet under Ram Temple in Ayodhya 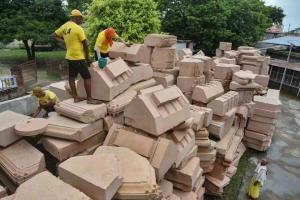 Workers clean stone blocks, to be used in construction of the Ram Temple, at a workshop in Ayodhya. Pic/ PTI


The Shri Ram Janmabhoomi Teerth Kshetra Trust has said that a time capsule will be placed about 2,000 feet underground at the Ram Temple construction site in Ayodhya.

According to Kameshwar Chaupal, a member of the Shri Ram Janmabhoomi Teerth Kshetra Trust, the capsule will help anyone in the future who wishes to study the history of the temple.

"The time capsule will be placed about 2,000 feet down in the ground at the Ram Temple construction site. In future, anyone who wishes to study about the history of the temple, will get all facts related to Ram Janmabhoomi in the time capsule," he said.

Kameshwar Chaupal, incidentally, is a Dalit from Bihar who had laid the foundation stone for a Ram temple in Ayodhya on November 9, 1989.

Since then, the 64-year-old Kameshwar Chaupal, has been anxiously waiting for the construction of the temple to begin.

Almost nine months after the historic verdict of Supreme Court on the Babri Masjid vs Ram Janmabhoomi dispute, Prime Minister Narendra Modi will visit Ayodhya on August 5 for the 'Bhumi pujan' ceremony to begin the construction of a grand Ram Temple.

The Supreme Court had, on November 9 last year, ruled in the favour of a Ram Temple at the disputed site in Ayodhya. The court had also directed the Centre to allot an alternative five-acre plot to the Sunni Waqf Board for building a new mosque at a 'prominent' place in the holy town in Uttar Pradesh.

Meanwhile, hectic preparations have begun for the 'bhumi pujan' ceremony that will be performed by laying a 40 kg silver brick at the sanctum sanctorum.

Three-day-long Vedic rituals, beginning August 3, will precede the main ceremony, according to the members of the Trust.

The entire temple town is being given a makeover with walls being painted in vibrant colours.

The 'Bhoomi Pujan' ceremony in Ayodhya at the site for the proposed Ram temple on August 5 will be telecast live by public broadcaster Doordarshan.

Next Story : 15-year-old boy killed by crocodile in Odisha