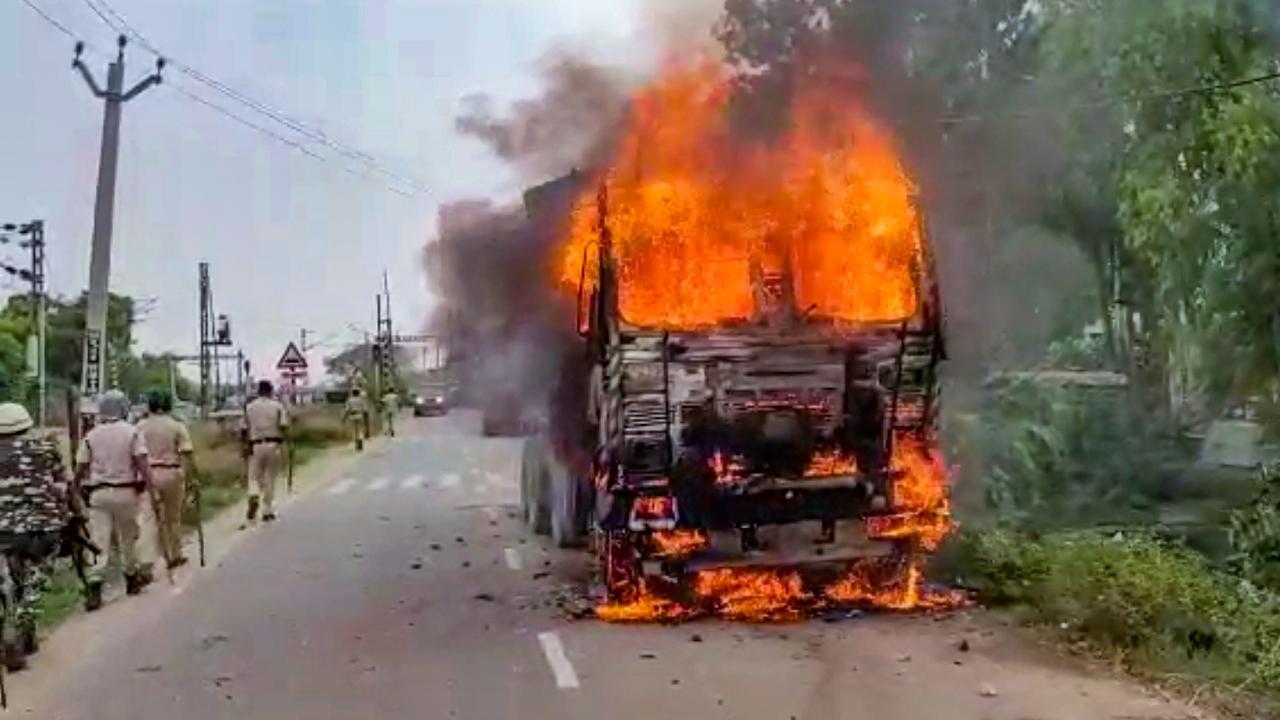 A transport vehicle after it was set on fire by protestors in Jehanabad. Pic/PTI


In view of the Bharat Bandh called by some organisations as a protest against the Agnipath recruitment scheme, security personnel was seen deployed across the country as a precautionary measure on Monday.

The Union Cabinet on June 14 approved a recruitment scheme for Indian youth to serve in the three services of the Armed Forces called Agnipath and the youth selected under this scheme will be known as Agniveers.

Meanwhile, security has been beefed up in several states on Monday amid protests against the Centre's new Agnipath recruitment scheme.

Due to ongoing students' agitation against the Centre's Agnipath scheme across the nation, eight trains were cancelled and six trains have been rescheduled in the east zone, said East Central Railway on Sunday.

After the policy, which allows Indian youths to serve in the regular cadre of the Armed Forces for a period of four years, was announced on June 14, protests erupted in various states including Delhi, Uttar Pradesh, Bihar, Haryana, Telangana, Odisha, West Bengal, Madhya Pradesh, Punjab, Jharkhand and Assam. As the agitation intensified in some places, protestors went on the rampage setting trains on fire, torching vehicles and damaging both private and public properties.

Congress will also hold "peaceful" protests across the country on Monday against the "anti-youth" Agnipath recruitment scheme.

A total of 46,000 Agniveers will be recruited this year but a top military officer said it will go up to 1.25 lakhs in near future. The entry age for all new recruits in the Armed Forces has been fixed as 17.5 to 21 years of age.

Meanwhile, police in several states have announced measures and tightened security for June 20 protest. In Delhi's neighbouring areas Faridabad and Noida, Section 144 of the Code of Criminal Procedure (CrPC), which prohibits the assembly of four or more persons, has been imposed.

In Rajasthan's Jaipur, prohibitory orders under section 144 have been imposed from 6 pm on Sunday till midnight of August 18 in the view of the possibility of disturbance to law and order due to the protests.

Punjab Police's ADGP Law and Order has directed the CPs and SSPs across the state to be on alert and asked them to monitor the activities of social media groups which are actively mobilizing or spreading instigating information about the scheme.

As a precautionary measure, all schools in Jharkhand will remain closed today in the wake of the protests called by certain organisations, the state education official informed on Sunday.

All schools in Bihar's Muzaffarpur will also remain shut, as per the order by the district administration.

While the government points out that the 'Agnipath' scheme gives a golden opportunity to the youth to join the defence system and serve the country, Congress had said the recruitment policy is controversial, carries multiple risks, subverts the long-standing traditions and ethos of the armed forces and there is no guarantee that the soldiers recruited under the scheme will be better trained and motivated to defend the country.

As the protests continue, a senior Army officer on Sunday clarified that the scheme will not be rolled back and said that it is the "only progressive step to make the country young".

Meanwhile, the registration process for the first batch of Agniveers under the Centre's newAgnipath recruitment scheme will begin on June 24 and the online examination would be held on July 24.

Congress has urged the government to keep the Agnipath scheme in abeyance, hold wide consultations with serving and retired officers, and address the issues of quality, efficiency and economy without compromising on any of the three considerations.

Addressing the concerns over the future of Agniveers and their job security, the Centre approved a proposal to reserve 10 per cent of the job vacancies in the Ministry of Defence for Agniveers meeting requisite eligibility criteria and also decided to give priority to them in the recruitment of the Central Armed Police Forces (CAPFs) and Assam Rifles.

Protests have disrupted rail services in several parts of the country. A total of 491 train services have been affected throughout the country due to the ongoing agitation, informed railway officials on Sunday.