The Mustafabad municipal ward is reserved for women and witnessing a five-cornered contest, with CPI(M) and AIMIM also fielding their candidates 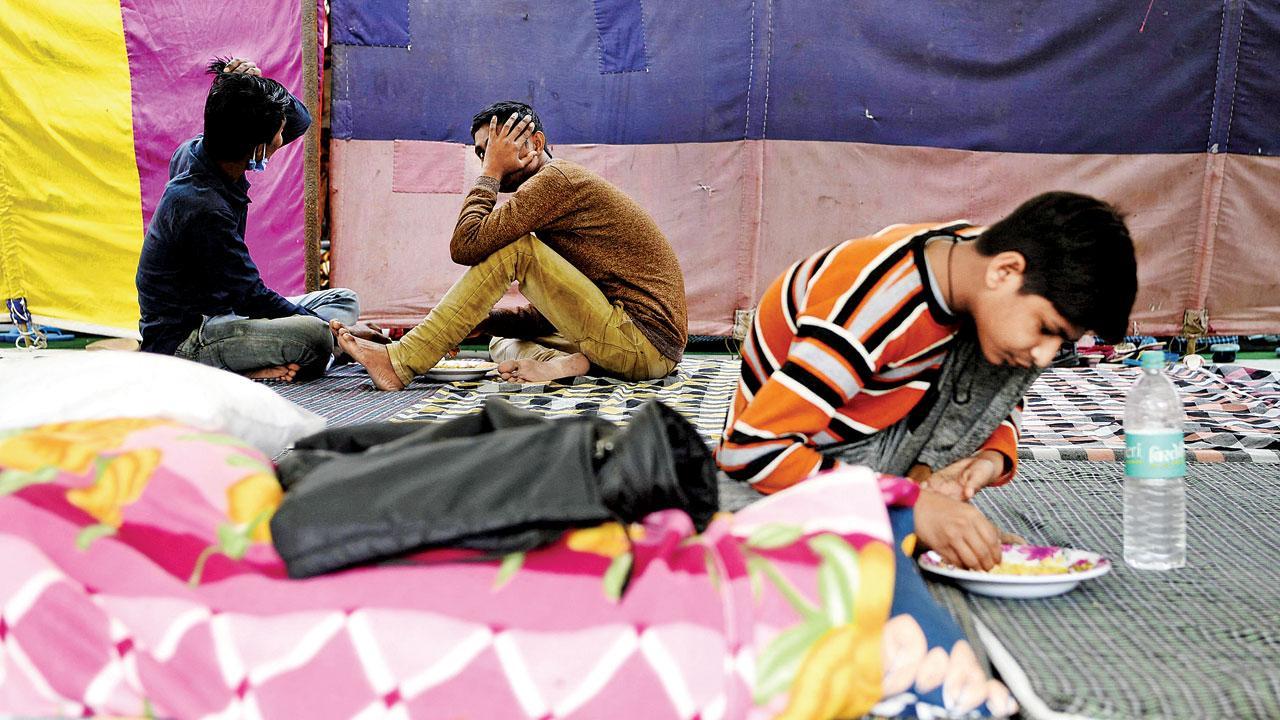 Displaced children at a relief camp for people displaced after the riots, at Eidgah Masjid in Mustafabad, Delhi, on March 5, 2020. Pic/AFP


Mustafabad, one of the worst affected areas in the February 2020 riots in North East Delhi, is singed by the memories of violence, and many residents think it will have a bearing on the civic polls. The Municipal Corporation of Delhi poll on December 4 is the first election in the city after the riots. There is unconcealed anger against the ruling AAP, with people across the religious divide calling the incumbent MLA Haji Yunus a “deserter.”

People spent their savings to repaint and restore the burnt and damaged buildings and places of worship in Mustafabad, adjoining Brijpuri and Shiv Vihar, but no help came from the government, said Haji Yasin, 55, owner of an automobile agency. The Mustafabad municipal ward is reserved for women and witnessing a five-cornered contest, with CPI(M) and AIMIM also fielding their candidates.

There are around 53,000 eligible voters in the Muslim-majority ward. Congress’s Sabila Begam is considered a strong candidate as she has the support of the Saifi community, which has around 13,000 votes. The BJP has fielded Shabnam Malik who is banking on the 10,000 votes of the Malik community. Her brother-in-law Mainu Malik said the “internal fight” in the Congress, the anger against the AAP, and the AIMIM cutting votes will help BJP win.

Yasin said, “The AIMIM’s candidate is a good person. People will support her. The BJP is just trying to muddy the waters. It has no voter base in the ward.” A supporter at CPI(M)’s poll booth said: “People will vote against BJP’s communal agenda and the double-face politics of AAP.” The CPI(M) helped the riot-affected people financially and legally, while the major parties remained absent, he said.

At Shiv Vihar Tiraha in Karawal Nagar East ward, Ravi Kumar is busy cleaning cars at his garage that was burnt to a crisp during the riots. Kumar, 37, said people generally do not remember the contribution of councillors. They vote on the basis of work done by MLAs and MPs. “In our ward in particular, people are upset with AAP MLA Yunus. He did not even show his face after the violence. (former Congress MLA from Mustafabad) Hasan Ahmed and (his successor) Jagdish Pradhan (of the BJP) had done a lot of work in the area,” he said. The BJP hopes to retain the neighbouring Dayalpur ward where Hindus are in majority.

At least 53 people died in the riots—a majority of them Muslim—during protests against the NRC and the CAA. According to The Hindu, a fact-finding report noted, “Speeches, statements and slogans by BJP functionaries, prominently Kapil Mishra and Anurag Thakur, characterised the protesters as traitors, enemies, and violent troublemakers, within a divisive Hindu-Muslim binary... There were also instances of police complicity...”

Next Story : 4.92 per cent turnout in first hour of polling in Gujarat