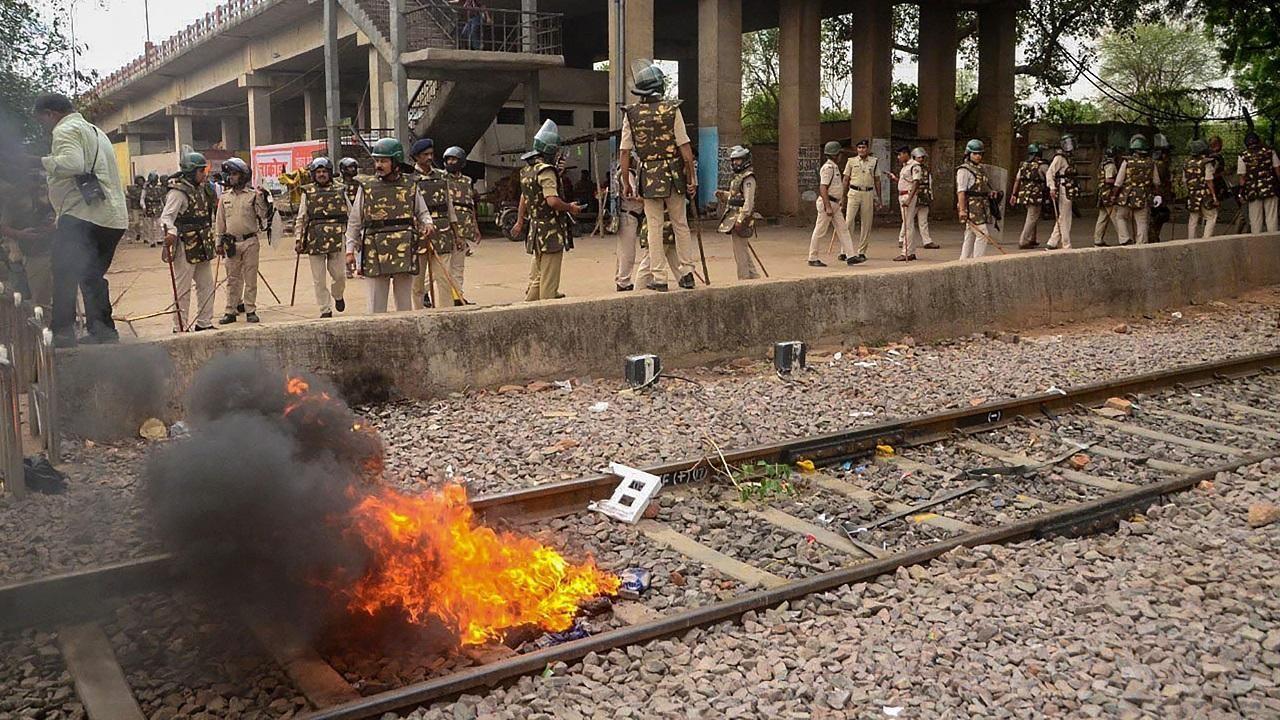 Police personnel inspect railway properties, that were vandalised and set on fire by miscreants during a protest against the 'Agnipath' scheme. Pic/PTI


Amid widespread anti-Agnipath protests across the country, the government has appealed to the protestors not to protest and understand the new recruitment programme of the military.

Defence Minister Rajnath Singh on Saturday approved a proposal to reserve 10 per cent of the job vacancies in the Ministry of Defence for Agniveers meeting requisite eligibility criteria to provide supportive measures to the Agniveers after their 4-year service ends in the Armed Forces.

Soon after the launch of the scheme, the government also announced that it has decided to increase the upper age limit for the recruitment of Agniveers from 21 years to 23 years for the recruitment cycle of 2022. Earlier today, the Home Ministry decided to reserve 10 per cent vacancies for recruitment in Central Armed Police Forces (CAPFs) and Assam Rifles for Agniveers. Home Ministry has further announced that it will give three years of age relaxation to Agniveers beyond the prescribed upper age limit to recruitments in CAPFs and Assam Rifles. For the first batch of Agniveers, the age relaxation will be of 5 years.

Moreover, there are several state governments like Assam, Uttar Pradesh, Madhya Pradesh, Haryana, Arunachal Pradesh, Uttarakhand and Karnataka that have come out and announced various supportive measures for the Agniveers who would return to the civil life after their 4-year service in the Defence Forces. Several state governments have announced that Agniveers, after serving the armed forces for 4 years, will be given preference in filling of vacancies in state police forces.

However, with the violence spreading in some parts of the country which included setting trains on fire, and stone-pelting, arrests were made. In Uttar Pradesh at least 250 people have been arrested and six FIRs lodged until Friday. Owing to the violence, the train services of the East Coast Railway zone were also affected. In states like Bihar, where trains were set on fire in some places, the state police is probing the role of the coaching institutes behind the violence.

According to the District Magistrate of Patna, provocative WhatsApp messages were found on the phones of the arrested people revealing the role of 7 to 8 coaching institutes. Notably, violence also broke out at Secunderabad Railway station in Telangana on Thursday. One person had lost his life in the police areal firing in its effort to disperse the crowd of protestors.

The stone-pelting incident was also reported at the spot in which the police personnel also sustained injuries. Acting against the violence, the Andhra Pradesh Police on Saturday detained a man named Subba Rao who ran Army training centres in Palnadu district on the suspicion that he is the conspirator in Thursday's arson at Secunderabad Railway station in Telangana.

In the backdrop of the violence, Union Minister Anurag Thakur on Saturday appealed to the youth, who are protesting against the Agnipath Scheme not to indulge in violence and said that the government is "seriously listening to their concerns". Speaking to ANI, Thakur said that the Ministry of Youth Affairs & Sports is mulling over bringing out something for the Agniveers when they retire from service in the Armed Forces.

Bharatiya Janata Party national president JP Nadda also appealed to the youth to "understand the scheme thoroughly" while also suggesting that there are "some forces which do not want change to happen" in the country. "I want to appeal to my young friends that this #Agnipath is a revolutionary scheme. I know that efforts are being made to mislead the youth. I know that there are some forces in the country who do not want change to happen. That's why I would request the youth, have faith in Prime Minister Narendra Modi, he has served the country. I appeal to them to understand this scheme thoroughly," Nadda said.