Ashok Gehlot, Sachin Pilot put up show of unity ahead of Rahul Gandhi's yatra in Rajasthan

Ashok Gehlot and Sachin Pilot have assured that the yatra (Rajasthan phase) will be the one of the most successful in the country. I am also sure that Rajasthan will also be the number 1 state, Venugopal told reporters in Jaipur 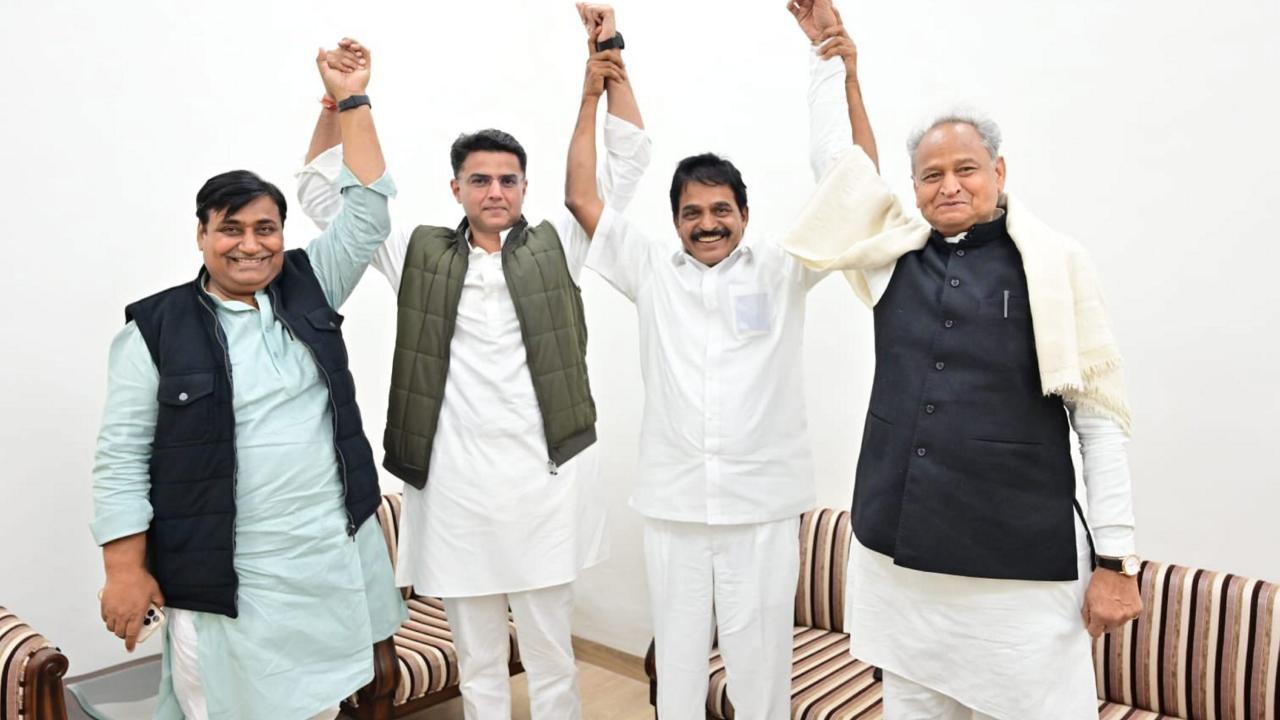 
In a show of unity days after Rajasthan Chief Minister Ashok Gehlot called his former deputy Sachin Pilot a traitor, the two leaders seemed to put their power tussle on hold as they appeared together before the cameras.

This is the Rajasthan Congress, All India Congress Committee (AICC) general secretary said at a press conference where he held the hands of both leaders.

The Congress leaders were talking to reporters after participating in a meeting on preparations for the party's Bharat Jodo Yatra, scheduled to enter Congress-run Rajasthan on December 4.

Venugopal recalled former party president Rahul Gandhi's remarks in Indore Monday, when he said both Gehlot and Pilot are assets to the party. Gandhi had been asked about Gehlot's traitor remark that had seemed to queer the pitch for the Rajasthan phase of the yatra led by him.

Ashok Gehlot and Sachin Pilot have assured that the yatra (Rajasthan phase) will be the one of the most successful in the country. I am also sure that Rajasthan will also be the number 1 state, Venugopal told reporters in Jaipur.

And senior party leader Jairam Ramesh tweeted, The Congress in the state is united and determined to ensure that it will be an outstanding success. And indeed it will be!

Earlier, while going into the meeting, Gehlot too had recalled Gandhi's remarks.

When Rahul Gandhi has said that our leaders are assets, then we are assets... where is the dispute then, the CM said.

This is the beauty of our party that after our top leader says anything, there is no scope (for further argument), he said.

Last week, Gehlot told NDTV that Pilot is a 'ghaddar' (traitor) who cannot replace him as CM as he had revolted against the Congress in 2020, and tried to topple the state government. In response, Pilot said such "mud-slinging" would not help.

On leaders making statements against each other despite a party advisory, Venugopal said he has asked for a report on this from the state party chief. We will take this up separately, he added.

Also Read: If BJP had worked in MCD, it would not have needed big campaigners: Kejriwal

He said the people of the country have seen the real face of Rahul Gandhi, but a demoralised BJP was spreading lies about his yatra.

We are very much united. Here, Ashok ji and Sachin ji both have already said the Congress is united in Rajasthan, he said.

Venugopal said the yatra will not be a short term event, and the party will unitedly fight the next elections and win.

Pilot said the Bharat Jodo Yatra was getting huge support, and lakhs of people from all classes will associate with it in the state.

The yatra will enter Rajasthan in Jhalawar and will cut across the state in about 15 days. Ahead of this, Pilot's supporters seemed to have renewed their demand to replace Gehlot with Pilot as the chief minister.

The BJP is worried because of the yatra. There is great enthusiasm among people to welcome the yatra to Rajasthan, the former deputy CM said.

Pilot lost this post and was also sacked as the state Congress president after the 2020 rebellion against Gehlot by a group of Congress MLAs led by him.

Gehlot said the BJP is trying to provoke Congress to gain advantage in the Gujarat Assembly elections.

At the beginning of the meeting, both Gehlot and Pilot greeted each in the war room set up to prepare for the Rajasthan phase of Gandhi's long march, which began from Kanyakumari.

Before the meeting, the CM told reporters that the main issue before the party in Rajasthan is the 2023 assembly election, and claimed that the mood is in the favour of the Congress.

We will win the assembly elections. We have introduced several unique schemes and programmes which are benefitting people across the state. I get an overwhelming response from people when I go on visits. It means that the government is going to be repeated, he said.

Gehlot said the BJP should bother about itself instead of commenting on the Congress.

On reports of NITI Aayog Vice-Chairman Suman Bery's concern over the revival of the Old Pension Scheme, the CM said the NITI Aayog or the Reserve Bank of India should first tell what concerns they had raised at the time of demonetisation.

He said the old scheme for government employees was revived in the state for the sake of social security.