JD(U) leader Vijay Kumar Chaudhary got the Finance Department and RJD leader Tej Pratap Yadav was given charge of Minister of Environment, Forest and Climate Change 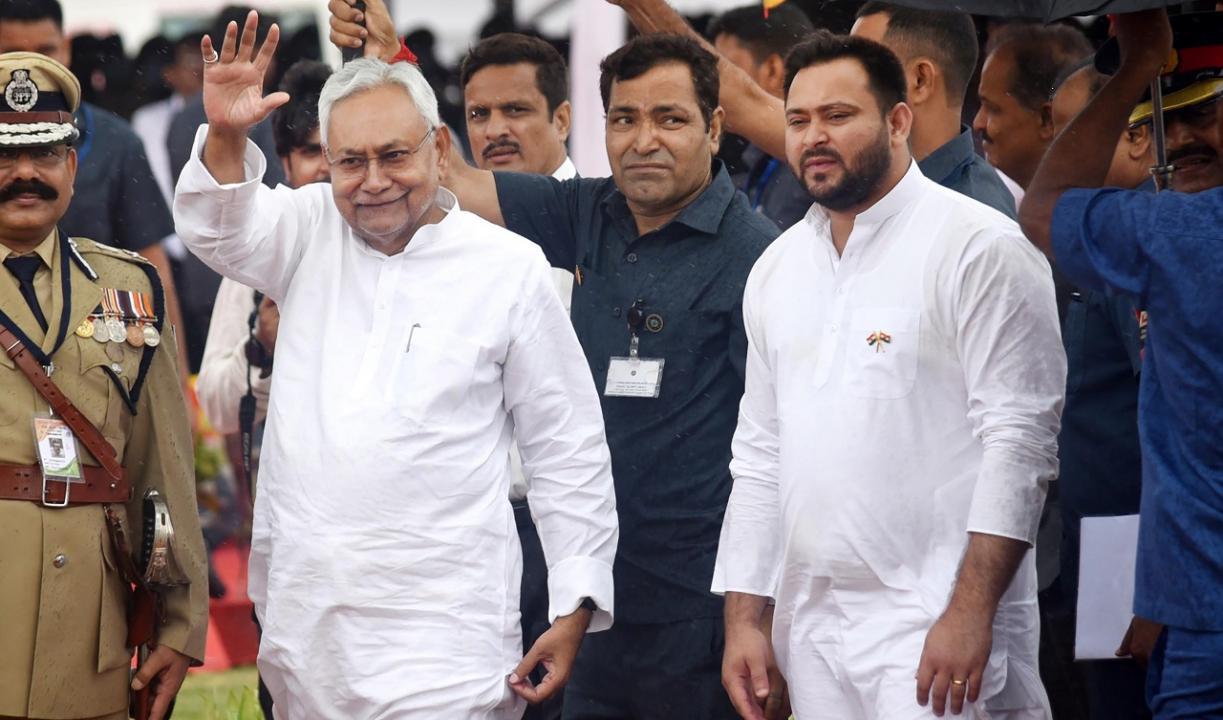 
Chief Minister Nitish Kumar has kept the crucial Home Department portfolio with himself and Deputy Chief Minister Tejashwi Yadav has taken charge of the Health Department's portfolio in the first Cabinet expansion of the newly formed Mahagathbandhan government in Bihar.

JD(U) leader Vijay Kumar Chaudhary got the Finance Department and RJD leader Tej Pratap Yadav was given charge of Minister of Environment, Forest and Climate Change.

Of the 31 ministers sworn into the Bihar cabinet, 16 were from Rashtriya Janata Dal (RJD), 11 were from Nitish's Janta Dal-United (JD-U), two were from Congress and one was from Hindustani Awam Morch (HAM) and one was an Independent lawmaker.

Shortly after the cabinet ministers were sworn in Chief Minister Nitish Kumar told reporters that the portfolios will be allocated soon to each minister and will hold a meeting in this regard.

The new ministers were administered the oath of office and secrecy by Bihar Governor Phagu Chauhan at Raj Bhavan here.

Congress legislators Afaque Alam and Murari Lal Gautam were inducted into the cabinet as ministers, while Hindustani Awam Morcha's Santosh Suman was also sworn in.

The Bihar cabinet can have up to 36 ministers, including the Chief Minister. Some ministerial berths will be kept vacant for future cabinet expansion, sources said.

Nitish Kumar had broken away from the BJP and formed a government with the RJD and other parties earlier this month. The Chief Minister and his deputy - RJD's Tejashwi Yadav - took oath on August 10.

The Bihar Grand Alliance has a combined strength of 163. Its effective strength climbed to 164 after Independent MLA Sumit Kumar Singh extended its support to Nitish Kumar. The new government is likely to prove majority in the Bihar assembly on August 24.

The BJP's central leadership will hold a meeting with the party's Bihar unit leaders here on Tuesday, days after the JD(U) parted ways with it and formed a new government in the state.

They are likely to deliberate upon the BJP's future course of action, and the strategy for the 2024 Lok Sabha polls, sources said, adding organisational changes may also come up for discussion. The meeting will be chaired by BJP national president Jagat Prakash Nadda and the general secretary (organisation) BL Santhosh will also be present.

The 2020 Assembly polls in Bihar was a tightly contested one with the National Democratic Alliance winning 125 seats, with BJP winning 74 of these, the Janata Dal (United) of Nitish Kumar 43, the Vikassheel Insaan Party 4 and Hindustan Awaam Party (Secular) 4. This put the NDA just above the requisite 122-majority mark needed to form the government.

The RJD and its allies, on the other hand, had won 110 seats. The RJD finished as the single-largest party with 75 seats, while Congress won a mere 19 seats. Of the 29 seats the Left parties had contested, they won in 16, with the CPI (ML-Liberation) winning 12 of them. Asaduddin Owaisi's AIMIM had won five seats in the Seemanchal region of the state. Four of its MLAs have switched to the RJD.