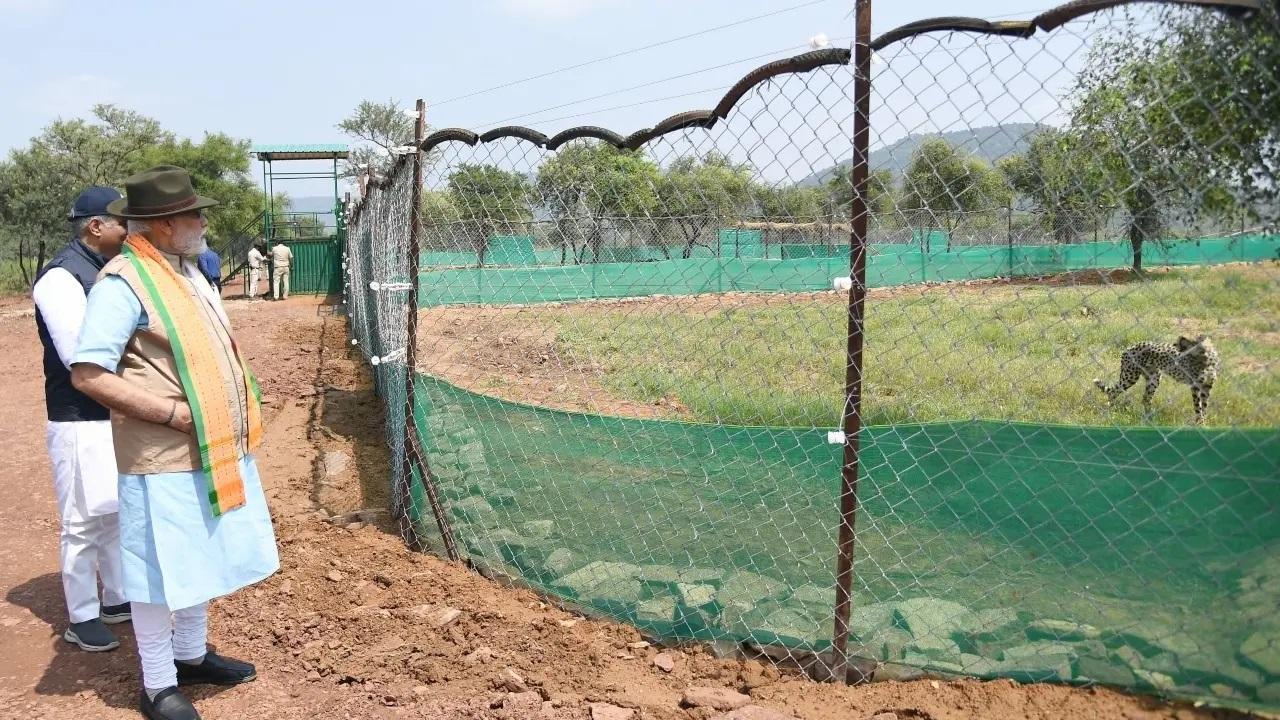 
The Ministry of Environment, Forest and Climate Change has constituted a nine-member task force for monitoring cheetah introduction in Kuno National Park, Madhya Pradesh and other suitable designated areas, said the officials on Friday.

The committee members will focus on reviewing the progress and monitoring the health status of these Cheetahs.

"Upkeep of the soft release enclosures and protection status of the entire area. Adherence to the forest and veterinary officials' protocols, advice on Cheetah introduction in India to Madhya Pradesh forest department and NTCA on status of Cheetah with respect to overall health, behaviour and upkeep," read an official statement.

Also Read: Our logistics should move at speed of cheetah: PM Narendra Modi

The committee's officials will also monitor the hunting skills and adaptations of these Cheetahs.

"Monitor release of Cheetah, the opening of the Cheetah habitat for eco-tourism. Suggest and advice on the development of tourism infrastructure in fringe areas, regularly interact with Cheetah Mitras....," added the statement.

Earlier on September 25, Prime Minister Narendra Modi said that based on the recommendation of the task force set up to observe cheetahs in Madhya Pradesh's Kuno National Park, it will be decided when people will be able to see the animals.

"Friends, a task force has been formed. This task force will monitor the cheetahs and see how much they have been able to adapt to the environment here. On this basis, a decision will be taken after a few months and then you will be able to see the cheetahs," said PM Modi in the 93rd episode of his monthly radio broadcast 'Mann Ki Baat'.

He exclaimed that people from all corners of the country have expressed happiness over the return of cheetahs to India.

"130 crore Indians are happy, full of pride; this is India's love for nature," PM stated.Modi further stated that a common question was posed by people when will they get an opportunity to see the wild animals from Namibia.

PM Modi invited ideas from the people what should be the names of the campaign and the cheetahs.

He further said, "But till then I am assigning some work to all of you. For this, a competition will be organized on the MyGov platform, in which I urge people to share certain things. What should be the name of the campaign we are running on cheetahs? Can we even think of naming all these cheetahs.... by what name should each of them be called? By the way, if this naming is of traditional nature, then it will be very nice since, anything related to our society and culture, tradition and heritage, draws us easily."

PM Modi also said that climate change is a major threat to marine ecosystems and that the litter on beaches is disturbing.

"It becomes our responsibility to make serious and continuous efforts to tackle these challenges," he said.

The cheetahs were declared extinct from India in 1952 but on September 17 this year, eight cheetahs (5 females and 3 males) were brought from Namibia under 'Project Cheetah' as part of the government's efforts to revitalise and diversify the country's wildlife and habitat.