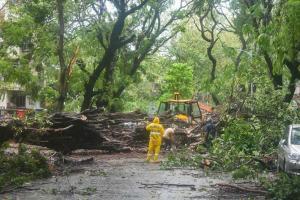 Workers clear an uprooted tree that fell on a road after rains and strong winds triggered by Cyclone Nisarga. Pic/ PTI


Two people lost their lives, while three others were injured, due to Cyclone Nisarga in Pune district on Wednesday, June 3. According to Jayshree Katare, Resident deputy district collector, Pune over a 100 'kutcha houses' were also partially damaged due to the cyclone in the district. Prakash Mokar (52) from Haveli tehsil and Manjabai Navle (65), a woman from Khed tehsil lost their lives.

Mokar lost his life while preventing a tin sheet from blowing away, while Navle died due to house collapse. Moreover, three animals were also killed in the district. Earlier, the India Meteorological Department (IMD) on Wednesday said that severe cyclonic storm 'Nisarga' has weakened into a cyclonic storm over coastal Maharashtra. The weather agency had predicted light to moderate rainfall at various places in Maharashtra and Madhya Pradesh during the next 24 hours.

"Severe cyclonic storm 'Nisarga' has weakened into a cyclonic storm over coastal Maharashtra. Light to moderate rainfall at most places, heavy to very heavy falls at isolated places very likely in Maharashtra and Madhya Pradesh during next 24 hours," the IMD said.

Several evacuation operations are being conducted across the state by the National Disaster Response Force (NDRF) with the help of Brihanmumbai Municipal Corporation (BMC), armed forces and the state police.

Next Story : India, China to resolve dispute through talks on June 6