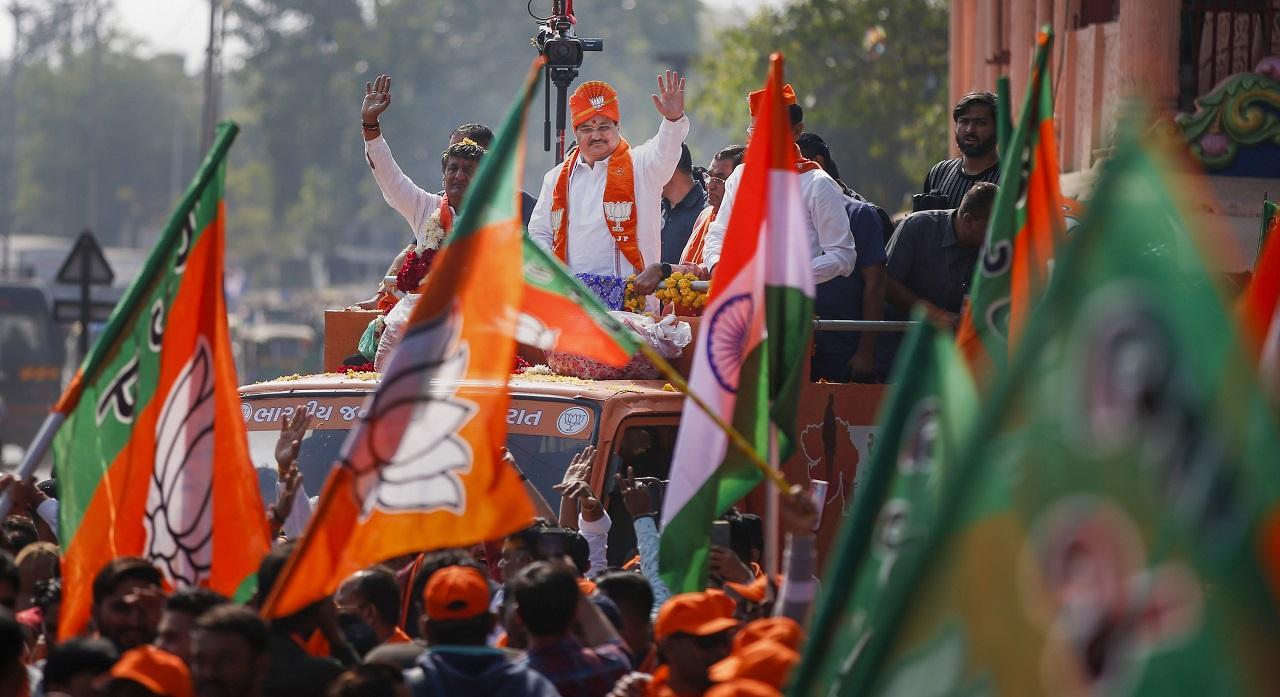 BJP National President JP Nadda waves at supporters during a roadshow for the campaign of the upcoming Gujarat Assembly elections. Pic/PTI


The people of Gujarat is all set to vote for the first phase of the assembly elections on Thursday after the intense campaigning by all the political parties.

There has been a race among the political parties including Bharatiya Janata Party, Congress and Aasm Aadmi Party for making poll promises as the fate of the political parties will be decided by over 2 crore voters today with 89 constituencies spread across 19 districts of Kutch, Saurashtra and South Gujarat going up for polling.

According to the Election Commission of India, the voting will begin at 8 am and conclude at 5 pm.

A total of 39 political parties are contesting in the elections and have fielded 788 candidates including 718 male candidates and 70 women candidates.

The ruling BJP is exuding confidence in retaining the 27-year-long rule in the state, while the Congress is desparate to save its second position in the state while Arvind Kejriwal's AAP is making a gamble by trying to cash in on 'anti-incumbency' and issues like inflation and unemployment to get to power.

As the BJP looks to retain power and AAP aims to make inroads into yet another state, a fierce battle is expected on various seats that will go to poll on Thursday morning.

The first on the list is Jamnagar North where the battle is between BJP's Rivaba Jadeja, cricketer Ravindra Jadeja's wife, Congress' Bipendrasinh Jadeja and AAP's Karsan Karmur.The BJP dropped the sitting MLA Dharmendrasinh Merubha who won the seat by defeating Congress candidate Ahir Jivanbhai Karubhai Kumbharvadiya in the 2017 Assembly elections.The seat came to the limelight after a political tussle between two members of the same family came to the fore with Rivaba, who is making her electoral debut, contesting from the BJP and her sister-in-law and father-in-law campaigning for the Congress candidate.

The second on the list is Morbi, which became a talking point following the tragic incident recently in which a suspension bridge fell into the river claiming the lives of over 130 people.The BJP has fielded Kantilal Amrutiya, who replaced sitting MLA and Cabinet Minister Brijesh Merja, and he is up against Congress' Jayantilal Jerajbhai Patel and AAP's Pankaj Ransariya.

The Opposition parties, during the campaign, raised the issue of "mismanagement" in the Morbi incident, trying to corner the government on the incident.However, historically, the BJP has won the Morbi Assembly seat in 1995, 1998, 2002, 2007 and 2012 before Amrutiya lost to Merja, who was in Congress in 2017. Merja had joined BJP later and won the by-polls from Morbi again. The BJP has Merja with Amrutiya in 2022.

The seat becomes significant as the AAP's chief ministerial candidate Isudan Gadhvi is contesting from this seat where he is confronted by BJP's Mulu Ayar Bera and Congress' Vikram Madam.The battle is expected to be triangular with a close contest between the BJP and AAP. Congress is said to be strong as the party candidate Ahir Vikrambhai Arjanbhai Madam had won the seat in 2017. Congress has replaced its candidate in the 2022 elections.

Rajkot West is the seat where Prime Minister Narendra Modi previously contested a by-poll in 2002. Former chief minister Vijay Rupani had also contested from the seat in the 2017 Assembly elections. The BJP has given a ticket to two-time Deputy Mayor Darshita Shah who is up against AAP's Dinesh Joshi and Congress's Mansukhbhai.

The seat is considered a bastion of the BJP which the party has not lost since 1985.

Rupani had won the seat by defeating Indranil Rajguru of INC with a margin of 53,755 votes in the 2017 Assembly elections.Devbhoomi DwarkaPabubha Manek, the BJP candidate who has not lost a single election in the last 32 years, is up against Congress' Malubhai Kandoria, and AAP candidate Nakum Lakhmanbhai Boghabhai.

In the 2017 Gujarat Assembly polls, Manek had won the seat by defeating Congress' Ahir Meraman Markhi with a margin of 5,739 votes.

The BJP has fielded Bhagwan Barad from the seat who is contesting against AAP's Devendra Solanki and Congress' Mansinh Dodiya.Barad had won the seat in the 2017 Assembly polls. He had resigned as the Congress MLA from Talala Gir Somnath district and had joined the BJP following which he was given a ticket from the same seat. Barad is an influential leader of the Ahir community. He won from the Talala constituency in 2007 and 2017.Katargam (Surat)

The seat is all set to witness an interesting battle this time in which AAP has fielded its state president Gopal Italia who is considered to be an influential Patidar leader, from the constituency. He had played a key role in the Patidar quota agitation in 2015.

He will face off against Congress candidate Kaplesh Variya, who belongs to the Prajapati community (OBC), and BJP candidate Vinodbhai Amrishbhai Mordiya.Porbandar

A tough battle is expected on the Porbandar seat where the BJP has fielded its sitting MLA and four-time winner Babu Bokhiria once again. He is pitted against Congress candidate Arjun Modhwadia and AAP's Jeevan Jungi.

Kandhalbhai Jadeja, son of late don Santokben Sarmanbhai Jadeja, is contesting on the Samajwadi Party ticket. He had won the 2017 Assembly elections on the NCP ticket, however, quit the party recently after he was denied a ticket. He is pitted against BJP's Dheliben Odedra, AAP's Bhimabhai Makvana, and Congress' Nathabhai Odedra.The voting in Gujarat will take place on December 1 and 5, and the counting of votes will be held on December 8.

Next Story : Voting begins for first phase of Gujarat elections; 89 seats up for grabs, 788 candidates in fray