However, before imposing the ban, the officials of the Ministry of Home Affairs (MHA) want to make full preparations, so that if the ban is challenged, then their side is not weakened 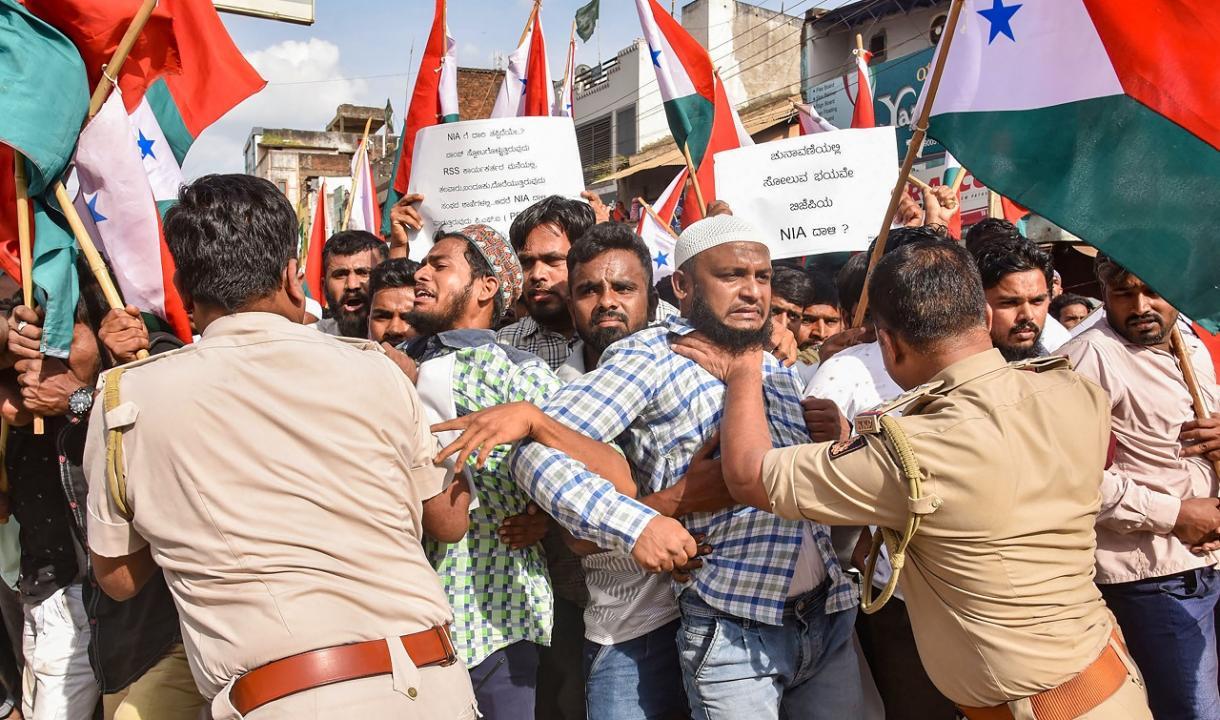 Police attempt to detain Popular Front of India (PFI) workers during a protest against the raid of National Investigation Agency (NIA), in Hubballi. Pic/PTI


Days after the NIA and the ED raided several locations linked to the Popular Front of India (PFI) across the country, the Union Home Ministry is planning to ban the extremist group on the basis of the evidences gathered by the investigating agencies, sources said.

However, before imposing the ban, the officials of the Ministry of Home Affairs (MHA) want to make full preparations, so that if the ban is challenged, then their side is not weakened.

In the raids conducted in 15 states of the country on September 22, the investigating agencies have found strong evidence of PFI's involvement in terrorist activities, based on which, it can soon be banned.

Soon after the raid, Union Home Minister Amit Shah also held a meeting with National Security Advisor Ajit Doval and the NIA Chief. In this, instructions have been issued to review the facts gathered against PFI and take further action.

According to sources, the MHA is also taking legal advice before banning PFI, so that when the party concerned in this matter approaches court, the government remains ready with its move. This is also being done because the central government had to withdraw the ban on SIMI in 2008. However, later it was again banned after the Supreme Court order.

This time, the government donesn't seem to be in a hurry and leave any stone unturned. And that's why, it is making its case strong, besides weighing all the legal asepcts before imposing ban on PFI.

According to the information, different agencies were engaged in gathering strong evidence against PFI for many years as instructions were given by the MHA that no link of PFI should be left out. While the NIA's investigation was focussed on the illegal activities of the criminal organisation, the ED has now been completely successful in tracing the source of their finances.

A source close to the ED said that during the investigation, suspicious transactions of about Rs 60 crore have been detected in the bank accounts of PFI. It has also been learnt that money was being sent to PFI through hawala. For this, bank accounts of labourers working in Gulf countries were used to send money to India.

On the other hand, apart from gathering evidence against the terror camp run by PFI members, the NIA has also collected strong evidences in five different registered cases, from making explosives to sending youth to organization like ISIS.

In 2017, the NIA, in its detailed report submitted to the MHA, had demanded a ban on PFI for its involvement in terrorist activities. Several states have also demanded the ban from time to time.

While talking to IANS about why there was a delay, former Uttar Pradesh DGP Vikram Singh explained many things in detail.

Former DGP Vikram Singh said that PFI should have been banned 5 years ago. He said, "Indulging in anti-national activities, preparing explosives, conspiring to assassinate the elected Prime Minister and money laundering of crores of rupees for anti-national activities. These are the grounds on which PFI can now be banned. It takes a long time to gather solid evidence in all these cases."

"One of the reasons behind the PFI not being banned so far is the political support they get. Leaders of some parties, even MPs, have described PFI as a social service organization. Its supporters are present in many states," Vikram Singh stated.

"Not only this, PFI's ally SDPI has also contested elections in many states. This is the reason why so much preparation has to be done to take action against PFI," he said.

Vikram Singh said that according to his information, the link of funding of PFI has also been found from Turkey's agency and Pakistan's ISI. The boys were also tricked and sent to ISIS. The ED and NIA made full preparations to connect these links, so that strict action could be taken.

At present, the Jharkhand government has banned PFI. At the same time, according to the official website of the MHA, about 39 organizations have been banned by the government under Section 35 of the Unlawful Activities (Prevention) Act 1967.