Justice Devan Ramachandran, in an order issued on Thursday evening, said it was a tragedy that the orders of the court and the competent authorities are "given absolutely no respect" by persons and entities "who are in charge of the future of this nation" 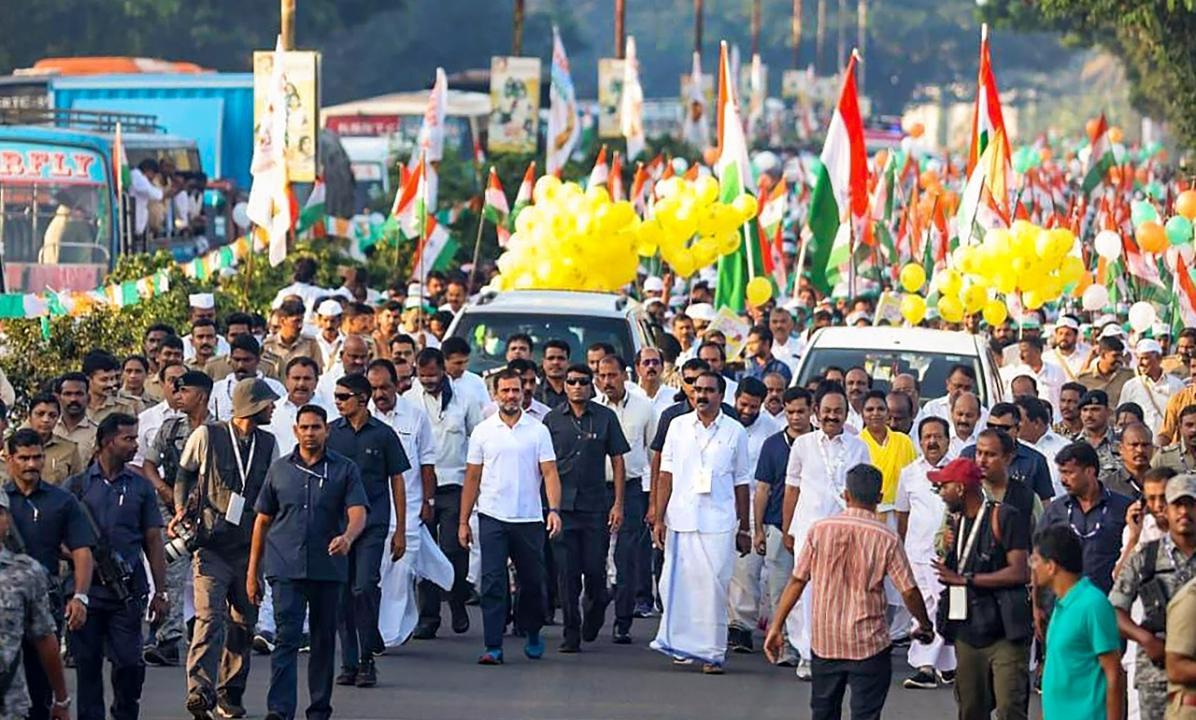 Congress leader Rahul Gandhi and others during the 15th day of party's 'Bharat Jodo Yatra' in Ernakulam, Kerala. Pic/PTI


The Kerala High Court has strongly criticised the Congress-led Bharat Jodo Yatra for the flex boards and banners erected along the side of the roads and said the government departments, including police, have chosen to turn a blind eye towards it.

Justice Devan Ramachandran, in an order issued on Thursday evening, said it was a tragedy that the orders of the court and the competent authorities are "given absolutely no respect" by persons and entities "who are in charge of the future of this nation".

The court made the observations during an urgent hearing requested by amicus curiae Harish Vasudevan, who filed a report along with photographs, to show that a particular political party, while conducting procession across Kerala, has erected a large number of boards, banners, flags and other such material illegally.

"Illegal installations have been made by a particular political party on every side of National Highway from Trivandrum to Thrissur and even beyond; and that even though the police authorities and other statutory authorities are fully aware of this, they have chosen to turn a blind eye to it," the court noted its order without naming Congress party or the Bharat Jodo Yatra.

The court directed the Local Self Government Department's principal secretary and state police chief to respond by Friday afternoon on how the "illegal installations have been put up and why they have not been removed".

"When the above official respondents respond, they shall also advert specifically to the earlier directions of this Court, that every board which has been put up by an advertising agency/printer without its name or address embedded on it is illegal and that necessary action against them should also be taken," the court said.

The court wondered why it was necessary for it to keep on reminding the officers that apart from the specific orders of this Court, the state government has issued circulars, as also the road safety authority having issued specific notifications prohibiting such actions.

"These illegal installations cause great danger to motorists since their attention would be distracted, while moving through the highway; and there is also the real danger of some of these installations coming loose and creating havoc, particularly with respect to two wheelers, as we have seen in other parts of the country earlier...," the court said.

Justice Ramachandran said there is also a problem of such installations being disposed of and the waste generated by it becoming incapable of being handled by the Local Self Government institutions or by any other competent authority.

"This Court, certainly, wonders why the official authorities are not aware of such issues, particularly when our state can no longer take the climate or weather for granted. In fact, Harish Vasudevan has also added that, in many places where such illegal installations have been put up with impunity, there are heavy rains and the danger of this contributing to violent accidents can certainly be not kept aside," the court said.

It said the thoughtless actions of a few and the indifference shown to it by the official authorities cannot, however, deter this Court from its resolve of making Kerala a safer place.