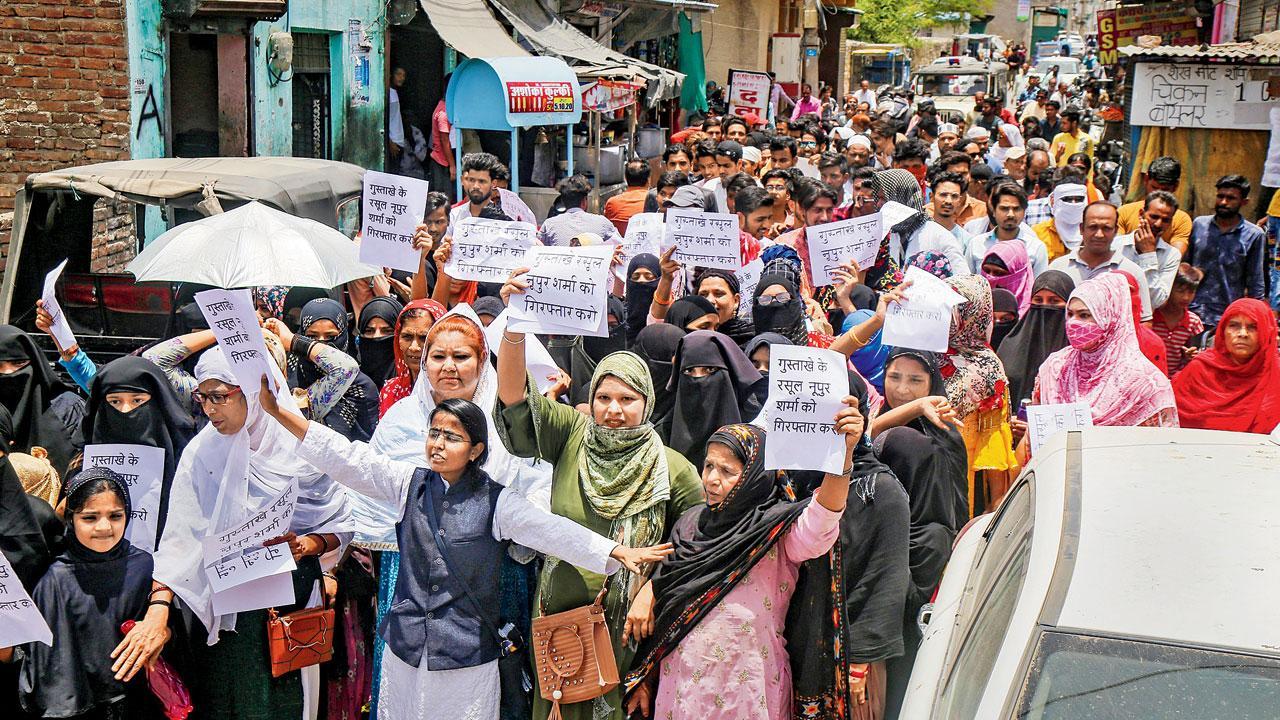 Local Congress councilor and her supporters a protest against Nupur Sharma, in Kota, on Sunday. Pic/PTI


Hitting out at the BJP over the derogatory remarks made by its functionaries against Prophet Muhammad, the Congress on Monday accused it of defaming India at the international level and said it was unacceptable that the nation has to apologise for its mistakes. The BJP’s president should apologise, it added.

It also demanded the arrest of the two BJP functionaries—Nupur Sharma and Naveen Kumar Jindal—after international outrage on the issue. The BJP on Sunday suspended its national spokesperson Sharma and expelled the party’s Delhi unit media head Jindal.

“PM @narendramodi Ji, Why should India as a country apologise to international community for the hate speeches of BJP bigots? It is BJP that should apologise; not India as a Nation. Your party should first apologise to Indians at home for spewing & spreading hatred day in day out,” he tweeted.

India on Monday hit out at the Organisation of Islamic Cooperation (OIC) for its criticism of the country in the wake of the derogatory remarks against Prophet Muhammad.External Affa-irs Ministry spokesperson Arindam Bagchi said India categorically rejects the OIC Secretariat’s “unwarr-anted and narrow-minded comments”. “The offensive tweets and comments denigrating a religious personality were made by certain individuals. They do not, in any manner, reflect the views of the Govern-ment of India,” Bagchi said. “It is regrettable that OIC Secretariat has yet again chosen to make motivated, misleading and mischie-vous comments. This only exposes its divisive agenda being pursued at the behest of vested interests.” The 57-member OIC had also urged the UN to take necessary measures to ensure that the rights of Muslims are protected.

Delhi police have filed an FIR on a complaint by Nupur Sharma who alleged that she is receiving death threats after her remarks on Prophet Muhammad, officers said on Monday.” Based on the FIR, we have initiated a probe into the matter,” a senior cop said.

Next Story : IISC develops miniproteins that may prevent Covid-19 infection