Pawar said some people go to listen to speeches, and "if such speeches are made, it is just entertainment" 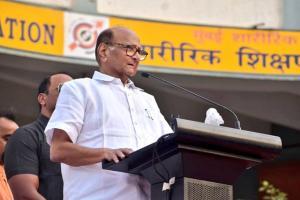 
Nationalist Congress Party chief Sharad Pawar on Tuesday brushed aside Raj Thackeray's speech at the Maharashtra Navnirman Sena's anti-infiltrator rally in Mumbai claiming only "people who matter to the overall politics of the state" need to be taken seriously.

On Sunday, the MNS had organised a well-attended march from Girgaum Chowpatty to Azad Maidan in south Mumbai demanding eviction of Pakistani and Bangladeshi infiltrators from the country, with Thackeray also voicing support for the Citizenship Amendment Act.

Queried on Thackeray's statements at Sunday's rally, Pawar said, "(There is) no need to take everything seriously.
People who matter to the overall politics of the state need to be taken seriously." In a further put-down of the MNS chief, Pawar said some people go to listen to speeches, and "if such speeches are made, it is just entertainment".

Incidentally, Thackeray had held several well-attended rallies during the Lok Sabha and Maharashtra Assembly poll campaigns last year in which he had torn into Prime Minister Narendra Modi and the ruling NDA, in the process earning praise from Pawar.

Next Story : Smriti Irani dons chef's hat, here's what she cooked for her husband