Rajasthan: Congress MLAs say high-command's decision on next CM should have consensus

Gehlot, along with state Congress chief Govind Singh Dotasra, met AICC observers Mallikarjun Kharge and Ajay Maken at a hotel on the Jaipur-Delhi highway on Monday 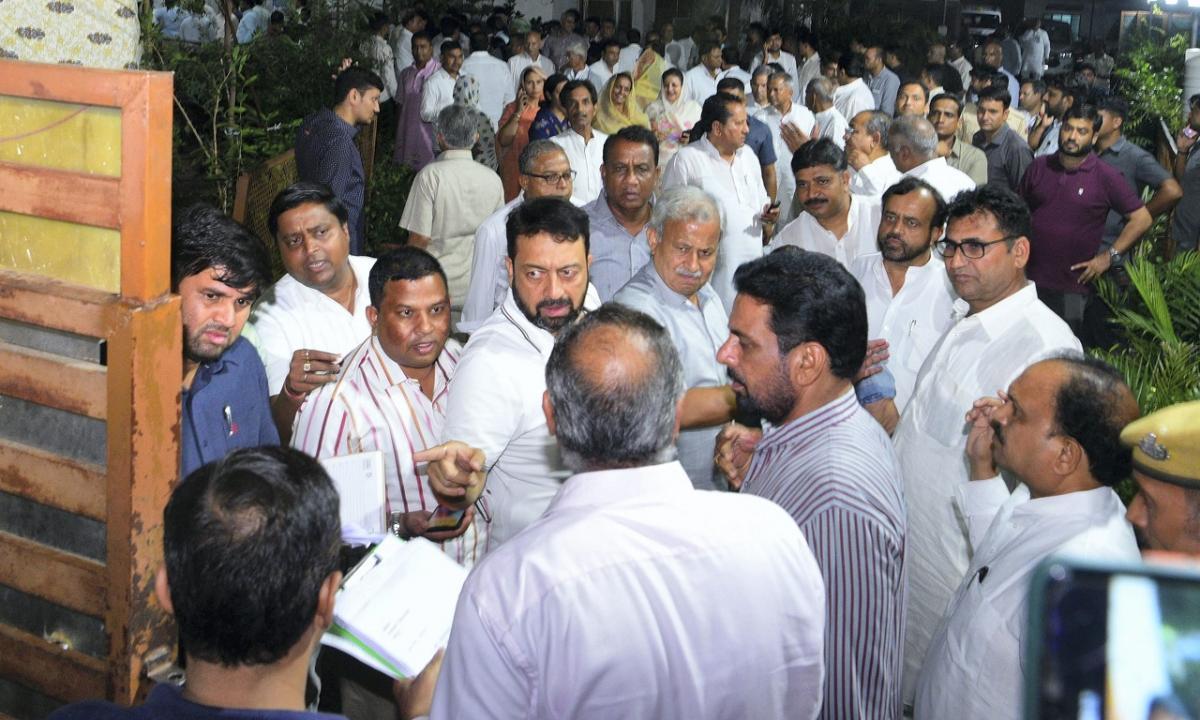 Congress MLAs leave for the residence of Rajasthan Assembly Speaker CP Joshi for a meeting, in Jaipur. Pic/PTI


Congress's chief whip in the Rajasthan Assembly Mahesh Joshi on Monday said the party MLAs have no objection to whoever is made the chief minister, but the final decision of the high-command should be agreeable to them.

Meanwhile, a video purportedly of a meeting of the Congress MLAs loyal to Chief Minister Ashok Gehlot has surfaced. Minister Shanti Dhariwal, at whose residence the meeting took place, is heard saying in the video that the Congress will suffer losses if Gehlot is removed from the chief minister's post.

Gehlot, along with state Congress chief Govind Singh Dotasra, met AICC observers Mallikarjun Kharge and Ajay Maken at a hotel on the Jaipur-Delhi highway on Monday. Some of the Congress MLAs were also seen at the hotel.

Kharge and Maken left for Delhi after the meeting.

The Congress in Rajasthan plunged into a crisis on Sunday as several MLAs loyal to Gehlot resigned over a possible move to appoint Sachin Pilot as Gehlot's successor, their rebellion erupting just ahead of a Congress Legislature Party meeting.

Joshi said the MLAs have no objection to whoever is made the chief minister, but the final decision taken by the party high-command should be agreeable to them.

"The doubts of the MLAs should be cleared by the high-command and then, whatever decision is taken will be accepted. We do not have any objection if anyone is made the chief minister but the final decision should have consensus," he told reporters here.

Joshi also said the ministers that met the AICC observers at the chief minister's residence on Sunday night had not asked them to include the conditions of the MLAs in the party's resolution.

"It was not that we wanted everything in the resolution. Maybe we failed to make them (the observers) understand or it is also possible that we tried but they did not understand. But we did not talk about any kind of amendment in the resolution," he said.

Joshi said it is wrong to say the ministers did not meet Kharge and Maken, adding that the MLAs had authorised a delegation to put their demands before the party observers, which it did.

Joshi himself, along with Dhariwal and Pratap Singh Khachariyawas, met the AICC observers on Sunday night.

Joshi said they put forward three conditions -- a decision on the selection of the chief minister should be taken after the Congress presidential poll, the chief minister should be from among those MLAs who stood with the government during the political crisis in 2020 and not from the Pilot camp, and the AICC observers should hold meetings in groups instead of one-on-one as sought by the high-command.

On the other hand, Congress MLA Giriraj Singh Malinga said the government does not have a majority in the Assembly after the resignation of the Gehlot loyalists.

He said a mid-term election is the best way forward.

"The speaker should accept the resignation of the MLAs. The government is in minority. I understand that a mid-term election is the best way. Everyone will get to know about their standing," the MLA from Badi said.

Malinga, who was once a Gehlot loyalist, did not attend a meeting of the Congress MLAs at Dhariwal's residence on Sunday. He was booked in a case recently after which his relations with the Gehlot government worsened.

Malinga said there were 30 ministers who attended the meeting at Dhariwal's residence and they are the ones who are most worried about a change of guard in the state.

"The ministers are worried that they will lose their chairs if a new cabinet is formed. They did not work for the people, were busy in their own arrangements and they are the ones who are protesting. I am with the high-command whether Ashok Gehlot, Sachin Pilot or anyone else is made the chief minister," he said.

The Pilot loyalists are maintaining a silence over the developments and refraining to speak much before the media.

One of them, Khiladi Lal Bairwa, however said, "We are with the high-command. Whatever decision is taken will be accepted. This is what we had said on Sunday as well."

Asked what problem does Gehlot have with Pilot, Bairwa said, "He (Gehlot) will be able to say it better.... We are with the high-command in every decision."

Meanwhile, a video purportedly of the meeting of the Gehlot loyalists at Dhariwal's residence has surfaced, in which the latter is seen saying the Congress will suffer losses if Gehlot is removed as the chief minister.

He said the chief minister does not hold two posts that his resignation is being sought.

"He has one post -- that of the chief minister. When he gets another post, then the matter will arise. Today, when the matter has not cropped up, why are you getting ready to resign? The conspiracy that made the party lose power in Punjab is about to play out in Rajasthan as well," Dhariwal is heard telling the MLAs in the video.

"Rajasthan will be saved only if you people wake up, otherwise it too will also slip out of our hands," he said.

Dhariwal also said Speaker CP Joshi was never in the chief ministerial race, neither did Gehlot take his name for the post.

"On day one itself, C P Joshi had said no to the post. He had said he is happy with the post he is holding. Neither was he in the race of candidature nor was he made a candidate. A controversy was created by planting a news in the media," Dhariwal said.