In an advisory issued on Saturday evening, the Noida Authority asked people, especially children, elderly and patients, living in nearby areas to wear face masks in the aftermath of the demolition as a precautionary measure 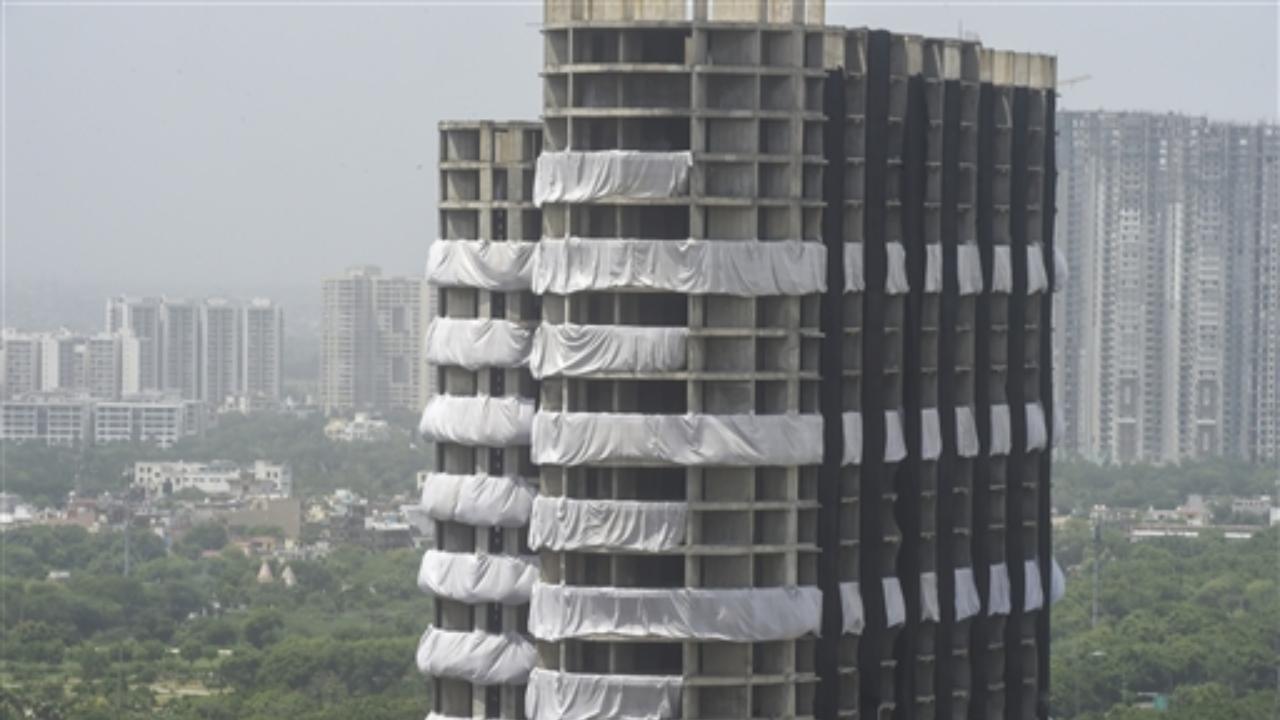 Supertech twin towers ahead of its demolition in Noida. Pic/PTI


Riyaz and his wife have travelled 200 km from Agra in the heat to fulfil their five-year-old grandson's wish of witnessing the 'historic' demolition of Supertech twin towers in Noida on Sunday.

His grandson saw a video on Facebook about the demolition and had been pressing his family ever since to take him to watch the court-mandated demolition of the nearly 100-metre tall illegal structures scheduled to take place at 2.30 pm.

Riyaz was among many other people who travelled to Noida from far-flung areas to watch the demolition of the structures despite restrictions on civilians from entering the area.

Riyaz and his family started early on Sunday morning from Agra but after entering the city, they were stopped by police from reaching the area near the twin towers as civilians are not allowed there.

"We cannot say no to Akram (grandson). He is the youngest and most pampered child in our house. We wanted to fulfil all his wishes," Riyaz (49) said.

They said they will stay with their youngest son who works in Delhi.

After being stopped by the police, the family said they will be back after some time.

When asked why they travelled from so far, Riyaz said, "It is such a big event. And a historic one. It was our grandson's wish and we also wanted to see it in person."

Akshay Mishra (18), a resident of Uttar Pradesh's Mainpuri arrived in Noida without telling his family that he is going to watch the demolition of the twin towers.

He reached Noida after travelling four hours in bus and came directly to the spot.

"My family is calling me constantly. I am not taking their calls. I wanted to see it in person. TV pr kya Maja. ( what's fun to watch it on TV)," Mishra said.
He too was stopped by police a few hundred meters before the demolition zone.

Despite several advisories by the police, people from nearby areas continued to gather near the demolition site.

"We want to see the blast. We should be allowed. Why are there so many restrictions? We will watch it from a distance. We are not bothering anyone," Santosh (23) said.

In an advisory issued on Saturday evening, the Noida Authority asked people, especially children, elderly and patients, living in nearby areas to wear face masks in the aftermath of the demolition as a precautionary measure.

The authority especially asked residents of nearby Parsvnath Prestige, Parsvnath Srishti societies, village Gejha and others in Sectors 93, 93A, 93B, 92 to wear face masks after 2.30 pm.

Have you been injured due to a pothole accident on a road or pavement in Mumbai?

Next Story : Supertech twin towers demolished in less than 10 seconds in Noida