Viral pictures of black panther and leopardess in one frame is a treat! 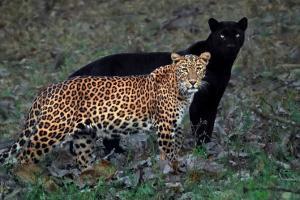 Photographer Mithun said that he actually shot the rare leopard couple in the winter of 2019. Pic/Twitter Mithun H


A stunning picture of a black panther and a leopardess in one frame has taken netizens by surprise. The stunning pictures were captured by Bengaluru-based wildlife photographer Mithun H, who managed to capture the rare leopard couple in Karnataka's Kabini forest, after a long wait.

The Eternal Couple . Saaya and Cleopatra have been courting since 4 years now and whenever they are together it’s a sight to behold. The forest comes alive as they trot nonchalantly in his fabled kingdom. Usually in the courting pairs generally it is the Male who takes charge and moves around with the female following close behind. But with this couple it was definitely Cleo who was in charge while the Panther followed. . This was shot on a surreal winter morning when a single Deer alarm led me to this breathtaking sight. . #kabini #love #leopard #nikon #wild #Natgeo #mithunhphotography #instagood #instadaily #jungle #bigcat #forest #wildlifephotography #nature #wildlife #blackpanther #melanistic #therealblackpanther #thebisonresort

Recently Mithun shared the picture of the black panther and the leopardess on Instagram with the caption, "The Eternal Couple." Since being shared, the picture has delighted netizens. Speaking to IANS Mithun said, "I shot this panther couple photograph in Kabini forest, waiting six days for this glorious moment." The photographer, Mithun Hunugund, has also worked with National Geographic in the past.

In his post, Mithun said the rare leopard couple, Saaya and Cleopatra, have been courting for 4 years now. He said that it's a sight to behold whenever they are together. "This was shot on a surreal winter morning when a single Deer alarm led me to this breathtaking sight," Mithun said in his post. The picture has gone viral, mesmerising both wildlife enthusiasts and common people.

Panther of my Dreams . One of those days where everything came together to give me one of the most legendary Panther sighting ever. As a Leopard lover I have always dreamt of such a sighting for years. After 4 years of following every move of this mythical cat to finally enter the jungle one evening and within 15 minutes you are treated to this sight, it was pure magic. You live and die for moments like these. . He kept walking up and down on this stunning dead log and was repeatedly sawing looking for his mate Mist who was very close. . On a private safari with @eevkuwait . This was special. . #wildlifephotography #bbc #therealblackpanther #instalike #kabini #nikonasia #earthcapture #forest #natgeo #bbctravel #wild #wildlifeplanet #thebisonresort #picoftheday #instagood #photooftheday #love #nikon #leopard #winter #blackpanther #nature #india #bigcat #melanistic #naturephotography #wildlife #mithunhphotography #earthpix

In the picture, one can see both the panthers looking to their right, directly into the lens, with the female panther in the front and the majestic black panther behind. Talking about the couple, Mithun said that in the courting pairs generally, it is the male who takes charge and moves around with the female following close behind. "But with this couple, it was definitely Cleo who was in charge while the Panther followed," he said.

Although the picture was released a few days ago, Mithun said he actually shot the rare leopard couple in the winter of 2019, either in November or December. Giving more insights the 31-year-old photographer said, "I have been visiting Kabini for the last 15 years and following big cats, leopards, and tigers individually. This black panther has come into our lives since 2015."

Mithun said that he managed to click the black beast from his safari vehicle as nobody is allowed to deviate from the safari route or alight from the Forest Department vehicle. Talking about the breathtaking shot, he said, "We have to be fortunate to see it." He further said that animals in Kabini are wild and free, and more scared of humans than those animals in a setting like Bengaluru Zoo.

Panther in the Rain . Fresh from a few days days back where we tracked the Black Panther on a beautiful monsoon drive in Kabini. . After nearly 3 months( longest ever) I was desperate to see this enigmatic creature. More so since when we last saw him in March he was involved in a mega tussle for territory and females with the new Khymara Male Leopard. It was simply magical to spend quality time with him again in the heart of his territory on a beautiful moss laden tree with the rains pelting down. He is looking fitter and stronger than ever before. Stay tuned for more pictures and stories to come from this surreal encounter. . #kabini #love #leopard #nikon #wild #Natgeo #mithunhphotography #instagood #instadaily #jungle #bigcat #forest #wildlifephotography #nature #wildlife #blackpanther #melanistic #therealblackpanther #thebisonresort