In the world of molecular cuisine, you have to be crazy to win as many awards as Gaggan has 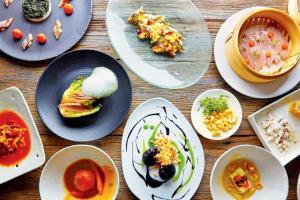 True fusion cuisine does not arise from a mixologist's whimsy; it requires the sensitivities and sensibilities of a, say, Ferran Adria or his pretege, Gaggan. Representation pic

How do you suppose it would taste if I added a quarter cup of red wine, say a good Pinot Noir, to my sambar in place of tamarind? Could we call it Tambram au vin and enter it for some competition? More important, how do you think it would taste served with a contemporary neer dosa bite the size of a large two-rupee coin.

Could we charge Rs 450 for this delicacy? What if I placed a dot of caviar on a single large curry leaf and floated it on the sambar at the end? We could now rename this as Tambram a la Port au Spain avec de la connerie and hike the price to Rs 750. Caviar isn't cheap, though connerie abounds.

I'm not going to tell you what connerie means, you can figure it out yourself. That's why God created Google. But I'll tell you this, a large number of Mumbai's new restaurants are getting away with connerie, mixing together the most improbable ingredients, creating mini-sculptures with names you can't pronounce and that tell you nothing about the taste, while serving minuscule portions on weirdly shaped plates and milking your credit card at the end.

Making Indian fusion food is not that difficult. I daresay I could dream up a few examples of fusion food connerie right here on the spot for you - Pani puri served in a large petri dish. Tutti-frutti ice cream within a layer of butter chicken gravy, frozen around a spare rib. Upma garnished with microbeads of gulab jamun and sprinkled with hand-crushed thepla. Punjabi dahi kadhi frozen into marbles and served by a circus juggler. Origami samosas made of edible paper stuffed with artisanal maida mothballs fried in Bengali panch phoron and soaked in drambuie.

Don't get me wrong. Chefs do this connerie because the number of paying fatwallet customers willing to subsidise connerie in food is growing in Mumbai. But mixing improbable foods is a science disguised as an art. When food becomes a performance and the day's special is a menu you can eat along with your dessert ice cream, then someone is taking someone for a long culinary ride. The infant mortality rate among new restaurants in Mumbai is high. True molecular or fusion cuisine does not arise from a mixologist's whimsy; it requires the sensitivities and sensibilities of a, say, Ferran Adria or his pretégé, Gaggan.

Which brings me to the crazy and amazing Gaggan, and his eponymous restaurant Gaggan in Bangkok, which has been declared Asia's Best Restaurant for three years running, and stands at #23 among the World's Best 50 Restaurants in a ranking sponsored by S Pellegrino & Acqua Panna. And what does he serve? Indian molecular cuisine. Gaggan is a walking, talking lesson for India's molecular chefs.

Gaggan trained for years under Spain's legendary master of molecular cuisine, Ferran Adria at his El Bulli restaurant. After a Gaggan dinner, I can say - as Gaggan himself does - "No one would eat here a second time!" Because you are not allowed to choose from the menu - you are served 25 pre-determined bonsai dishes, each one a masterpiece, while Gaggan himself weaves stories of Kolkata streets as you eat. Gaggan's cuisine is a culinary retrospective of his own childhood sights and bites on the Calcutta streets he roamed as a boy.

The Gaggan experience is food as theatre. It costs 4,000 Thai baht a pop (Rs 7,500) and has to be booked as much as four months ahead. The air quivers over the teppanyaki-style surround table, as if dinner will feature fire-eaters and hobgoblins throwing daggers at each other.

Each bite-sized morsel has its own way of dismantling itself, the crust crumbling and dissolving while liquids packed in layers gush and squirt out, blend and merge, creating eureka moments of recognition, amazement, intrigue and sheer delight. Among my favorites was what looks like a white mushroom with foam on top, which discombobulates your taste buds with direct strikes of sambar, idli and fresh coconut chutney.

In Gaggan's hands, the papri-chaat emerges as two yoghurt-colored blobs in steel spoons. Pop them whole in your mouth and the agar-agar wrapping breaks, releasing the many complex flavours and tastes of papri-chaat. No crunch - but what a punch.

There is a lesson in this for Mumbai's swashbuckling chefs. Whether molecular or udipi, when food is assembled rather than cooked from passion, it will be connerie. The pressure to be different is creating a generation of faux chefs, who miss the part where love of food and genuine affection for diners come in. Atithi devo bhava - the guest is god - has long been the guiding light of some of the country's best restaurateurs like AD Singh and Anjan Chatterjee. Perhaps one day the molecular chefs will receive this non-molecular insight.

Here, viewed from there. C Y Gopinath, in Bangkok, throws unique light and shadows on Mumbai, the city that raised him. You can reach him at cygopi@gmail.com Send your feedback to mailbag@mid-day.com