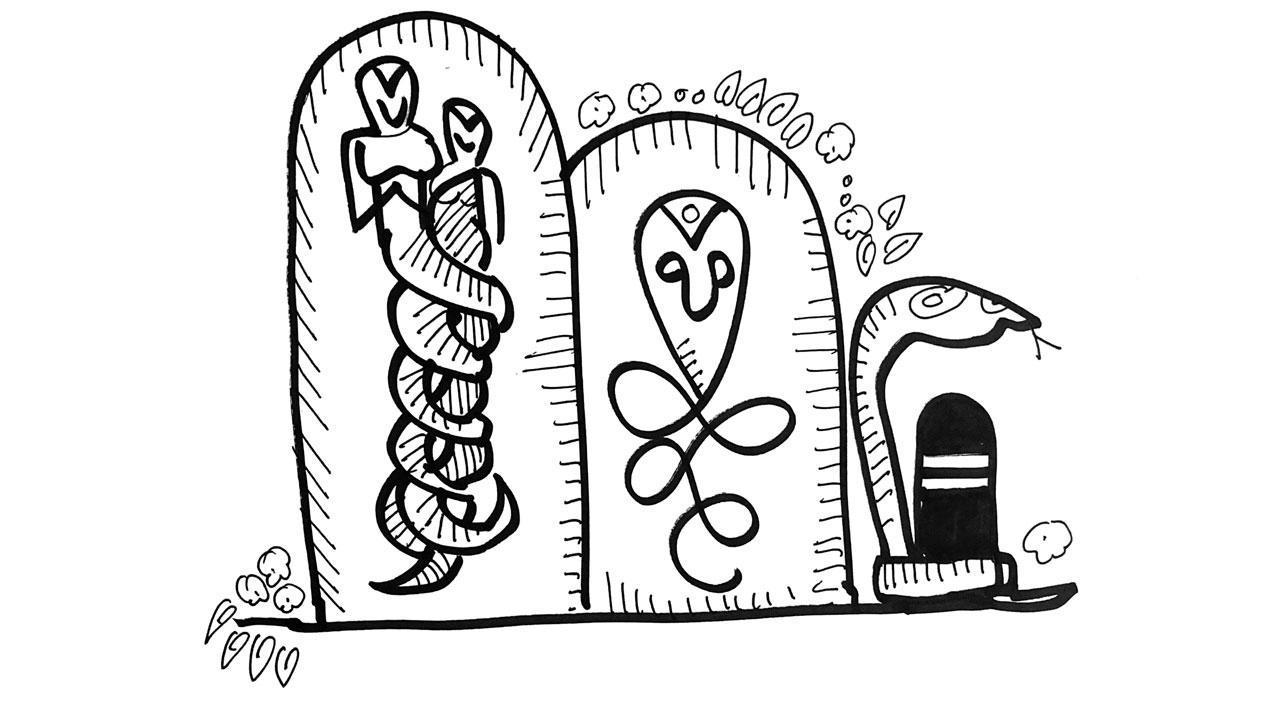 A section of American Hindus are trying to turn the phrase “snakes in the Ganga” into a neo-Hindutva metaphor for Hinduphobia. This is highly disrespectful to revered Naga-devata or snake deities of  Indian rivers and water bodies, including Ganga. This is another case of  American Hindu IT engineer  “parents” creatively misinterpreting Hinduism from 5,000 miles away, claiming inspiration from Agamic “parampara”. Clinging to Hindu roots in foreign soil, after your parents abandoned Indian citizenship for money, is difficult. But it is lucrative. It enabled the UK PM to marry an extremely rich Hindu girl, so rich that her Brahmin caste does not matter.

Snakes are evil in Christian and Islamic mythology. They embody the Devil. They tempted Eve to eat the Forbidden Fruit. So God cursed the serpent to forever crawl on its belly. In Islamic art, from mediaeval Persia, the serpent is often shown as a dragon, with feet, to remind us of this myth. JK Rowling was accused of being anti-Christian because she popularised witches and wizards. But she reinforced the Christian idea of equating the snake with evil Voldemort. She deliberately used the words Nagini and Slytherin to remind her readership of this ancient connection.

Evil is not a Hindu concept. Evil is an idea found in one-life religions. Hindus, Buddhists and Jains believe in rebirth. The best symbol of rebirth is the serpent, or Naga, that sheds its skin and regenerates itself regularly, like the earth whose fertility is restored each year after the rains and the flood.

The oldest forms of worship in India include serpents. Even today Nag Panchami is celebrated by farmers who thank snakes for protecting their harvest from rats. In Buddhism, when Buddha awakened, he touched the earth, and the serpent-king Vasuki rose from the subterranean realms to salute him. In Jainism, a serpent is the symbol of the 23rd Tirthankara of this era, Parsva-nath. Village goddesses in India such as Gangamma of Andhra Pradesh and Sateri and Shantadurga of Goa are shown holding snakes in their hands. Shiva is often called Nag-nath, and has a snake coiled around his neck. Vishnu sleeps on the coils of a snake. He dances on a snake’s hood. Naga-loka is a magical place under the earth. Old snakes are supposed to have gems on their hoods that heal the sick and the wounded.

Of all the snakes, the hooded snake or Cobra is most sacred. Why hooded snake? This has to do with art. The cobra lends itself best to represent stillness and movement in art. While copulating, snakes have to move. So copulating serpents on temple walls represent the movement of time. To spread its hood, the snake has to be still. The hooded coiled serpent thus represents stillness. On temple walls, we find images of hooded coiled snakes as well as copulating Naga and his Nagini to indicate yoga and bhoga, monastic order as well as fertility rites, the yearning for freedom and the yearning for wealth and power.

If American Hindus are seen worshipping Naga-devatas in newly built Hindu temples of America, it is likely that their Christian neighbours will call them Devil worshippers. That will unite the Jews, Christians and Muslims against Hindus. The American Hindu does not want that. Hence, the desperate need to equate “snake in Ganga” with Hinduphobia, a dangerous trend. What’s next: Mocking “idol in temples” to please iconoclasts?

Next Story : Nats and the soundless scream