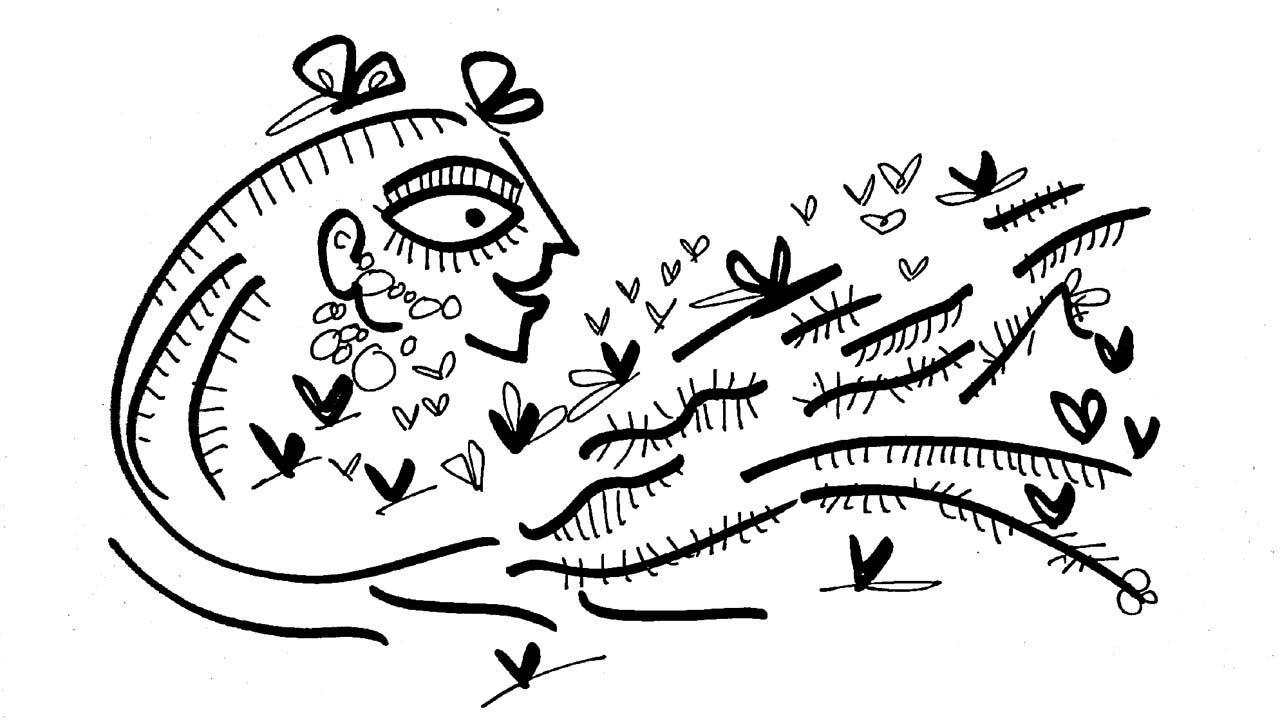 The story of Bhramari Devi comes to us from Andhra Pradesh’s Mallikarjuna temple. It is said that there was an asura called Arunasura. He had asked for protection from all creatures that have no legs, two legs or four legs. This meant he was protected from every fish, bird, beast and human being. He thought this would make him immortal. So, he kept troubling the gods. The gods invoked Bhramari Devi. She, in turn, produced six legged insects from her body that attacked the asura and killed him. Thus, nature creates things that we cannot imagine. This theme is found in Hindu mythology repeatedly. An asura asks a boon, which allows him to think he can outsmart death. But the gods find a weakness in the book and exploit it. Arunasura’s story  brings the insect world to the centre stage.

Insects are not a common theme in Hindu mythology. Amongst all the insects in the Hindu mythology, the one that gets prominence is the honeybee. Primarily because bees go to flowers and make honey. We find the honeybee connected with the god of love. It is said that Kamadeva,  the god of love, has a bow. The bow’s limb is made of sugarcane and its string is made out of bees. Thus, bees become a metaphor for the lover and the beloved. Honey represents the emotion of love and affection.

In Krishna lore, we find the bee appearing in the famous Bhavar Geet. When Krishna leaves Radha, he returns to meet her in the form of a bee. Radha complains that Krishna is like the bee who moves from flower to flower, while she is the flower stuck to the branch of a tree. She cannot move the way he does and remains in the village she lives in. This emotion becomes a code in the Baramasi songs of the Gangetic plains where women yearn for their travelling beloveds.

Insects do play a role in mythologies around the world. In Biblical mythology, the creepy crawly insects are linked to the Devil who is even given the title of Lord of the Fleas. In Greek mythology, Minos is cursed that if he sheds semen in the body of a woman who is not his wife he will emit insects. To save his lovers, Minos invents the world’s first condom. The goddess Athena curses a woman called Arachne who claims to be a better weaver to turn into a spider. Then there is the story of Eos, the goddess of dawn, who grants her lover immortality but not eternal youth. He turns into the cicada. In Egyptian mythology, great value is placed on the scarab or dung beetle who rolls dung such that it reminded ancient poets of the sun being pushed into the sky out of the night by some celestial insect. In Roman mythology, butterflies became the symbol of the soul. Japanese mythology values the dragonfly as a symbol of courage because a dragonfly ate a mosquito that bit the first emperor Jimmu, and tried to steal his royal-divine blood.

Thus insects, like everything else in mythology, can be turned into a metaphor to communicate ideas from the practical to the metaphysical.

Next Story : The surgical talk