Films by the sea

When she did, they both embraced lingeringly, as Amruta’s eyes welled up. It was very moving to witness this sacred moment 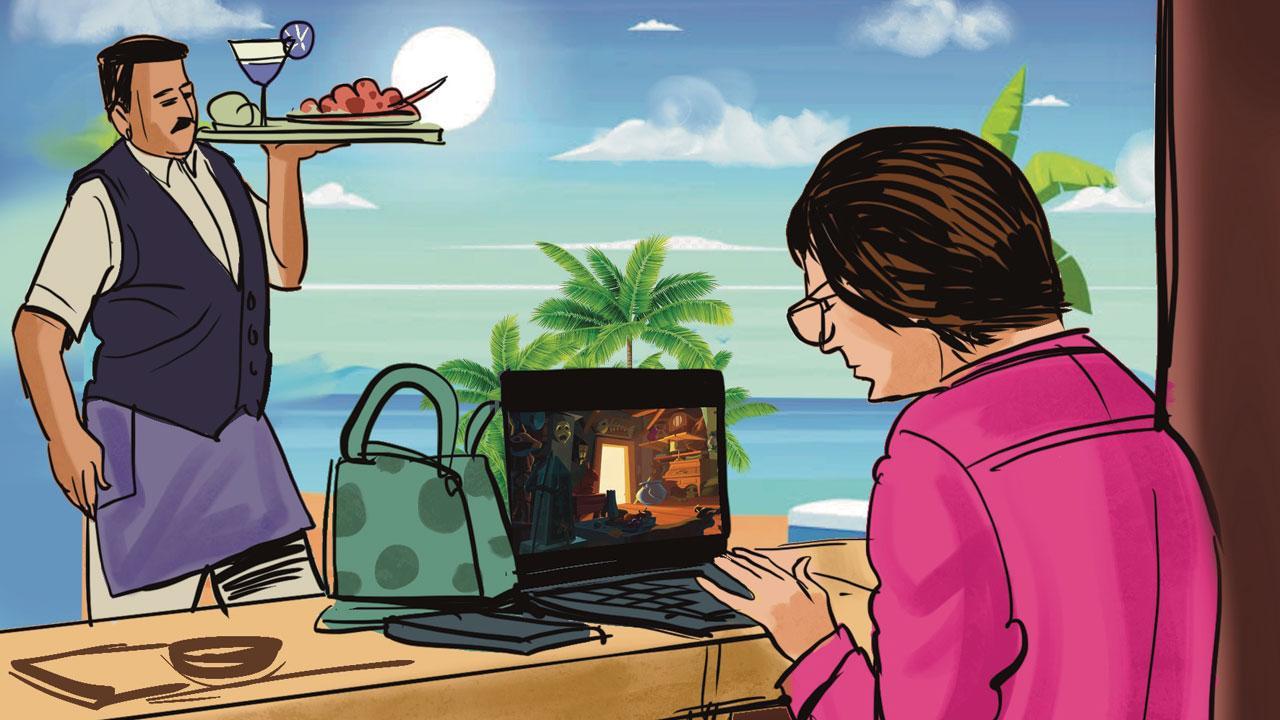 Have you been to sunny Goa for a week, and spent almost all of your time working? And only posting Facebook photos from your balcão, of the lovely pool below, and sea with cruise boats right beyond your hotel, into which you didn’t dip even one toe? Sheesh! I was at Film Bazaar, which runs alongside the International Film Festival of India (IFFI Goa), now both under the National Film Development Corporation (NFDC). And I watched tons of films for the Berlin International Film Festival—mainly  Film Bazaar films for now—as well as films for the Golden Globe Awards, for whom I’m International Voter. So I nestled in the viewing room in back-to-back screenings, or in my room watching films, and skipped all parties, save the last, when they announced the prizes. Still, I met quite a few people around the film pitching sessions, and over quick sorties for lunch.

One of the lovely people I met is the brilliant actress Amruta Subhash, who has acted in nearly 50 films, series and shorts in Hindi and Marathi. These include Avinash Arun’s Killa (The Fort), which won the Crystal Bear at our Berlin Film Festival, which she had attended; Astu, Firaaq, Raman Raghav and Gully Boy, and acclaimed series including Sacred Games and Bombay Begums. Shuchi Kothari, originally from Ahmedabad, who lives in New Zealand, and had written the story and screenplay of Firaaq with Nandita Das, who directed it, finally met Amruta Subhash here, 14 years later. Amruta had played Jyoti in the compelling 2008 film, on the psychological trauma following the Gujarat riots of 2002. “When I wrote the screenplay, I had imagined Amruta playing Jyoti in a certain way, and later when I saw the rushes, it was so moving that she had played it exactly as I had imagined. I never had a chance to tell her till now.” When she did, they both embraced lingeringly, as Amruta’s eyes welled up. It was very moving to witness this sacred moment.

And Subhash, who trained at the National School of Drama, met Naseeruddin Shah, who was one of her NSD professors.  After Gully Boy, he told her, “Ab teri gadi chal padi” (you’ve really taken off)…w-o-h sab theek hai (all that’s fine), but when are you doing theatre?” And that’s exactly what she’s doing. Amruta and her actor-writer-director husband Sandesh Kulkarni, have been doing theatre for years. Imagine, even at the peak of her game, she blocks time to do theatre, and has been doing a season of Phir Se Honeymoon (Another Honeymoon) at Prithvi Theatre, about a couple retracing their honeymoon after many years. I am so humbled by this remarkable integrity and grateful Bollywood has infusions of such integrity.

Another delicious moment was when I ran into a talented filmmaker from the North East (who wished to remain confidential): he was about to fly to Sweden to direct a Swedish web series! Whaaat? How did that happen? “Oh, I met the producer just like this, he saw my work, we got along well, and he asked me to direct a Swedish web series,” he says, like it’s moongphali. I’m just so happy for him, I felt a happy buzz for some time.

I ran into director Arun Karthick and producer Mathivanan Rajendran, who made the excellent Nasir (they just won the FIPRESCI India Award for it). They looked so elegant, wearing crisp white veshtis to the award ceremony. Later, we hang out at the very shady Vishal Bar and restaurant, and they explain to me the caste system of veshtis and lungis, if I got it right: only Brahmins can wear veshtis (dhoti) kashta-style, with a strip between the legs tucked behind the waist—eeks!; white mundu/veshti is more for formal occasions, and coloured veshti at home. Initially, Arun said, he used to be worried it might all slip away—so you have to ensure you’re wearing decent boxers underneath, lest the wind try mischief. Ha ha, this was an afternoon well spent. Tons of films apart, Film Bazaar was full paisa vasool for me.

Next Story : Phools from another Gulshan