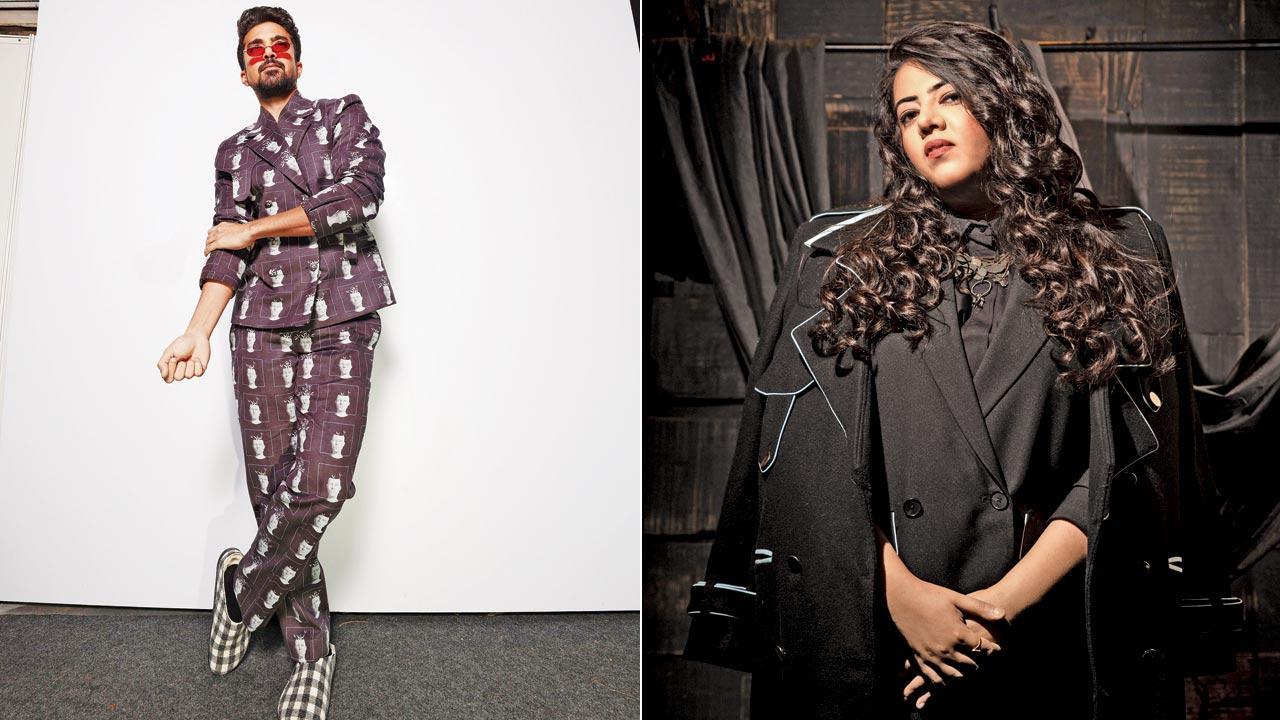 Actor Saqib Saleem in a trouser-suit by Two Point Two by Anvita Sharma, who strives to make a garment that works for all genders; (right) Anvita Sharma

Behold the prodigious, magical muse. The classical view of the female body as a glossy object or passive muse has been a source of inspiration for the creative artiste. And while the cultural appetite for bohemian narratives on musedom may be waning, whenever one does appear, it’s almost always a man musing over a woman.
Traditionally, men in the fashion industry have been all about maintaining creative control; influencing clothing trends and filtering the glitz and glamour of the zeitgeist to create an idealised muse.

Now, the flow of ideas may be heading the other way as female designers are crossing over into menswear, bringing along techniques and insights gained by their own brush with women’s clothing. What we are seeing could be a game-changing twist in menswear, offering another reality, another function via an elegant and relaxed dressing sensibility that favours elements of streetwear, smart-casual workwear and pared-down eveningwear. 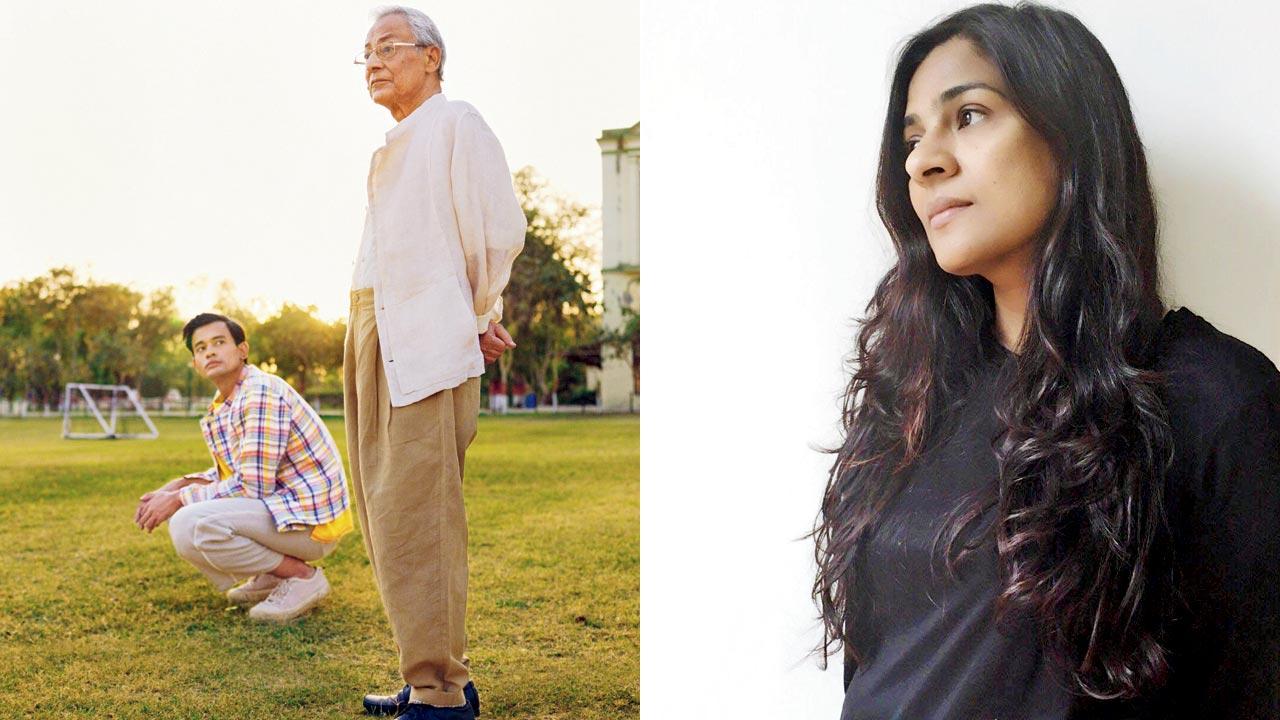 Rina Singh of Eka Man says selling to a male client is straight-forward and minus drama. “But they are slowly opening up to sartorial details like the cut, proportion and styling”; (right) Rina Singh

But what happens to the curious relationship between designer and muse? Do women have a different approach to inspiration? Rina Singh of Eka, Urvashi Kaur and Two Point Two’s Anvita Sharma are producing wildly distinct, subversive and surprising menswear collections, unravelling new perceptions about what is beautiful.

Singh often envisions designing for someone who is close to her home. “It could be my husband Sandeep Dua, or my close male friends. I don’t look to fashion people for inspiration,” says Singh whose label Eka Man subverts traditional notions of dressing up and down. Her research involves spending time in male company. “They [men] have an interesting perspective on life, a crisp ‘get on with it’ attitude. I can definitely do with a little brashness myself,” she laughs.

Some fashion insiders are inclined to say, men are divided into two types: those who button their sleeves and those who don’t. At the risk of oversimplifying, Singh says that no more than 10 per cent of men like experimenting. Selling to a male customer is a “pretty, straight-forward contract; there’s no drama, like with womenswear”. Is it because shirts and trousers don’t go through seasonal cycles and rely more or less on the standard cuts and sober palette? “We can’t blame menswear for being boring; that’s what most men want. But they are getting conscious of trends, and may be more open to new details like the cut, proportion and styling tricks,” Singh thinks. 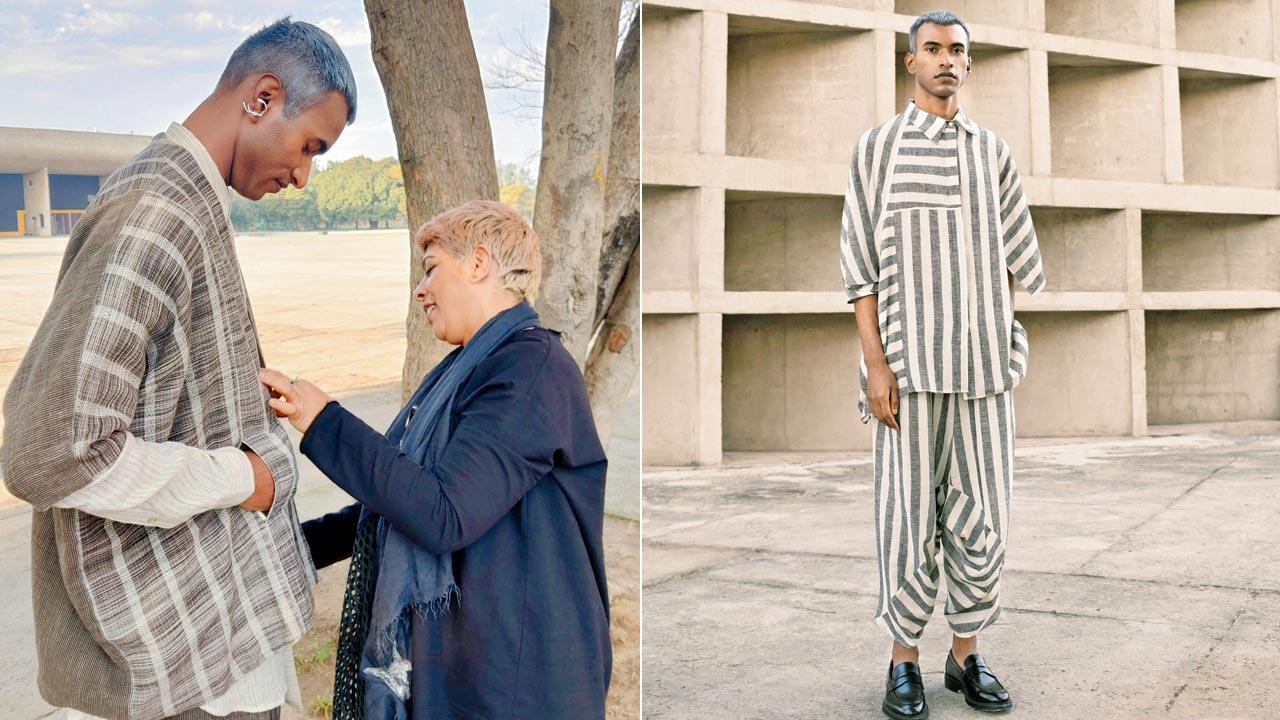 Urvashi Kaur styles a model at a shoot; (right) Kaur says her male muse “is more fluid, in touch with his culture and roots”

With the last three drops, the Eka Man aesthetic was forged by the merging of craft-based techniques and textiles with easy, recessive shapes. “Designing for someone unlike yourself takes a different mindset. For now, we are happy to start a conversation [with our menswear], so we might not persuade a man to wear florals, for example, but we will engage him with easy-wearing separates or layering discussions.”

Imagining clothes and identities, outside male and female categories fascinates Urvashi Kaur, 48. “Female designers understand this mix easier than men; we have been doing it intuitively all our lives,” she says. Whether it’s the mingling of sexes on the runway or via capsule drops on social media, or a single garment intended for more than one gender, her references hinge on a host of references, rather than a single muse. Still, when it comes to male role models, the athletic Milind Soman does not hurt. “My man is more fluid, in touch with his culture and roots,” says Kaur. “There’s a certain beauty and softness when a woman looks at a man, and so, also when she designs for him. We might bring out different aspects and qualities of masculinity than a man.”

Two major categories largely define contemporary men’s clothing; streetwear and suiting. “Where is the middle ground for well-crafted clothes for the professional man?” she asks. “The young male entrepreneur of today, say someone heading a digital start-up and holding meetings with potential investors, is not interested in wearing the traditional business suit.”

Kaur’s man is lean, not burly, and self-assured. For her, the Indian sartorial heritage is a stimulating place to start. “As with my womenswear lines, stretch fabrics like knit jersey and linen silk, help define the body a little. We try to convery an emotional allure and urbanity through tailoring, patterns and textures.”

With experience Kaur has learned that fit comes first for a male customer; shape and fabric follow. “You can’t half-ass with menswear. Fit is the most important piece. It’s little surprise then that men prefer bespoke clothing.”

Anvita Sharma, 31, acts as her own muse.

She has never shown much interest in pandering to the binary—she is not in the business of offering sherwanis or cocktail lehengas. Tailoring is what Sharma knows best, and while fashion was once about fantasy, today, it is about authenticity and inclusiveness.

This shift comes at a time when people are especially aware of how we define or exaggerate rigid rules of gender can be harmful. This begs the question, how can we create clothes for men that feel timeless without reinforcing regressive masculinity ideals? “I think how men dress is changing,” she says. Since launching the genderless label, Two Point Two in 2017, she has dressed a pastiche of clients; from a one-year-old to 72-year-old. Her work is an inspiring mix of that sweet spot between casual and formal, and she often references shapes and silhouettes of the bomber jacket, batwing shirt, kurta, trouser-suit and jumpsuit. “Genderless is the agenda of our brand and while I admit that we are not there yet in terms of gender equality, we do our bit by talking about it,” she explains.

“At fashion school, we are taught about the technical differences between male and female fashion, but I don’t think those merits matter anymore, at least not when I am designing.” Personally, she has preferred to shop at the men’s section most of her life. “Why should we categorise clothing according to gender? They are just clothes, after all.”

Next Story : Verification of house help should be non-negotiable