‘Return us to you, renew our days…’ 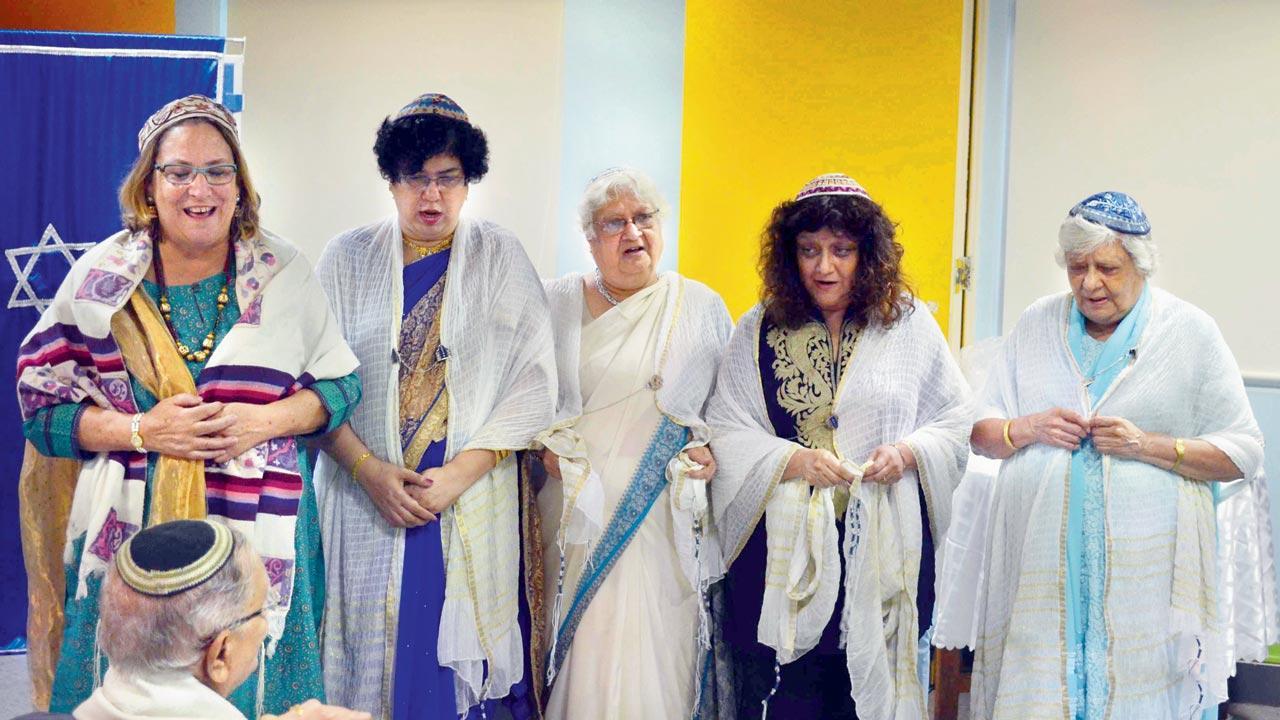 This story started with a song. Even taught online—COVID reducing choir class to a Zoom link—the hauntingly beautiful melody of Hashivenu echoed in our heads. We told Salome Rebello, conductor of the Mehli Mehta Music Foundation women’s choir, that we loved learning the Hebrew prayer-set-to-song of resilience and renewal. The title of this piece loosely translates one of its lines.

Hashivenu was her childhood favourite, she said. Her mother, Rina Moses Rebello, sang it with her congregation: the reformist Jewish Religious Union (JRU). The group propagates democratic precepts and practices forming the bedrock of its introduction 97 years ago by the gynaecologist, Dr Jerusha Jhirad, on her return from medical studies in England. 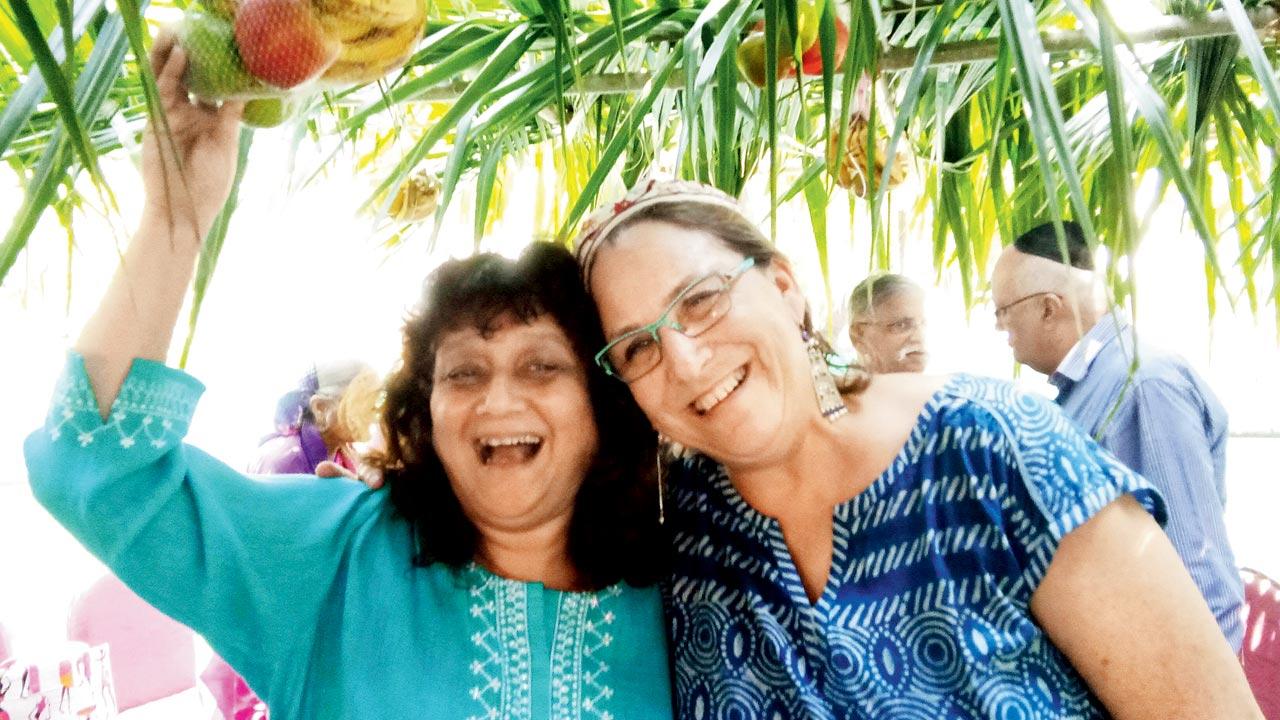 Rina Moses Rebello with Rabbi Edelman-Green under the sukkah, a booth-like hut woven with willow, palm and myrtle branches, where thanksgiving is offered for the harvest feast

Other women rallying around Dr Jhirad were Rebecca Reuben, Rachel Joseph, Dr Milcah Joseph, Milcah Vakrulkar, Miriam Aptekar, Sheba Moses, Elizabeth Ezekiel and Julie Solomon Joseph. Incidentally, in recognition of Jhirad’s great dedication at advancing the cause of the country’s female doctors, the Jhirad Crater is one of three such on planet Venus named to honour a trio of Indian women achievers.

Bene Israelis, literally, “Children of Israel”, are descendants of survivors shipwrecked off the Konkan coast about 2,000 years ago, after the destruction of the Second Temple of Jerusalem. Baghdadi Jews settled in 19th century-India, while the oldest surviving documents, including a merchant’s charter, of Cochin Jews date to 1000 CE. 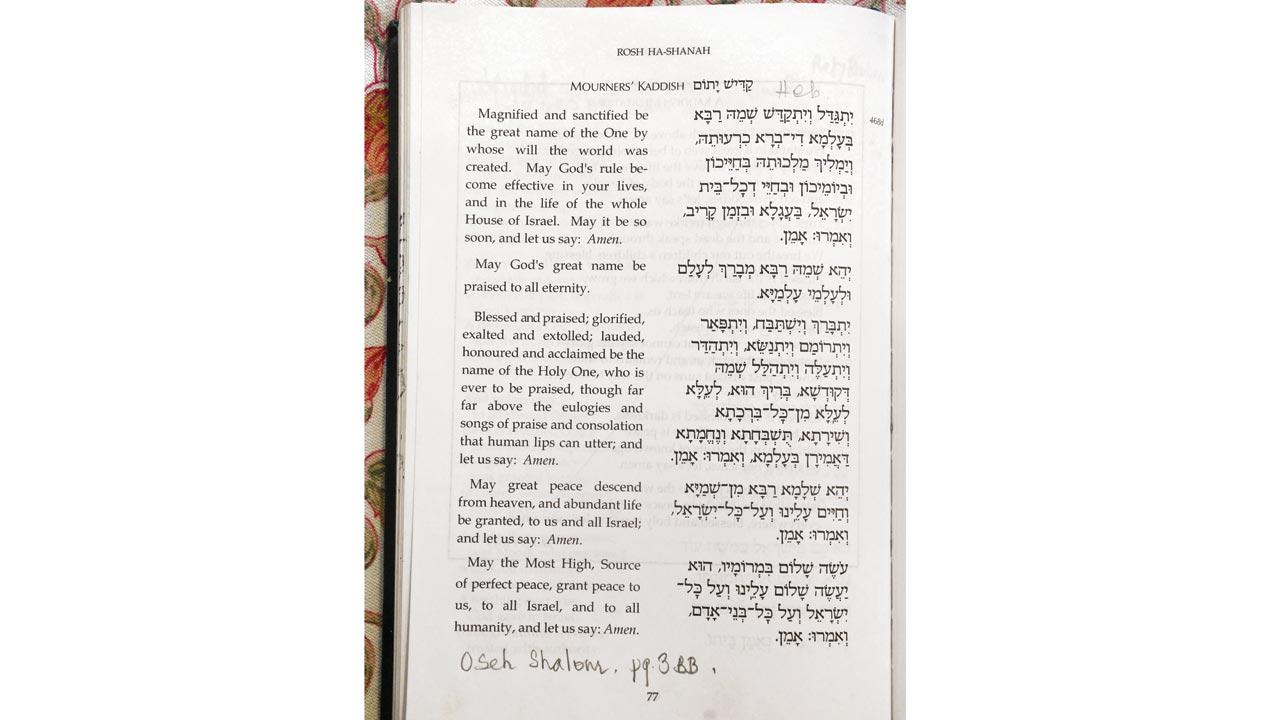 Page from the Machzor Ruach Chadashah (Services for the Days of Awe) prayer book. Showing the English translation accompanying the Hebrew, the “Mourners’ Kaddish” makes no mention of death—it instead appreciates life’s abundance

Moses writes, in The Reform Jewish Movement in India: “Much to contrary belief, the JRU did not cater to any specific group of Jewish people in the city. It was coincidental that the majority joining was Bene Israeli and not Iraqi/Baghdadi Jews.” The JRU did once have a handful of Baghdadi Jew members, like Caravan magazine editor Maurice Japheth, remembered for sermons elevating everyday themes to another level.

Rosh Hashanah begins this evening, the Jewish day unfolding sunset to sunset, according to the darkness-unto-light concept of Creation in the Genesis. It marks the community’s calendar transition from the year 5782 to 5783. In almost every respect, the JRU continues adhering to rituals and ceremonies prescribed by the ancient faith. 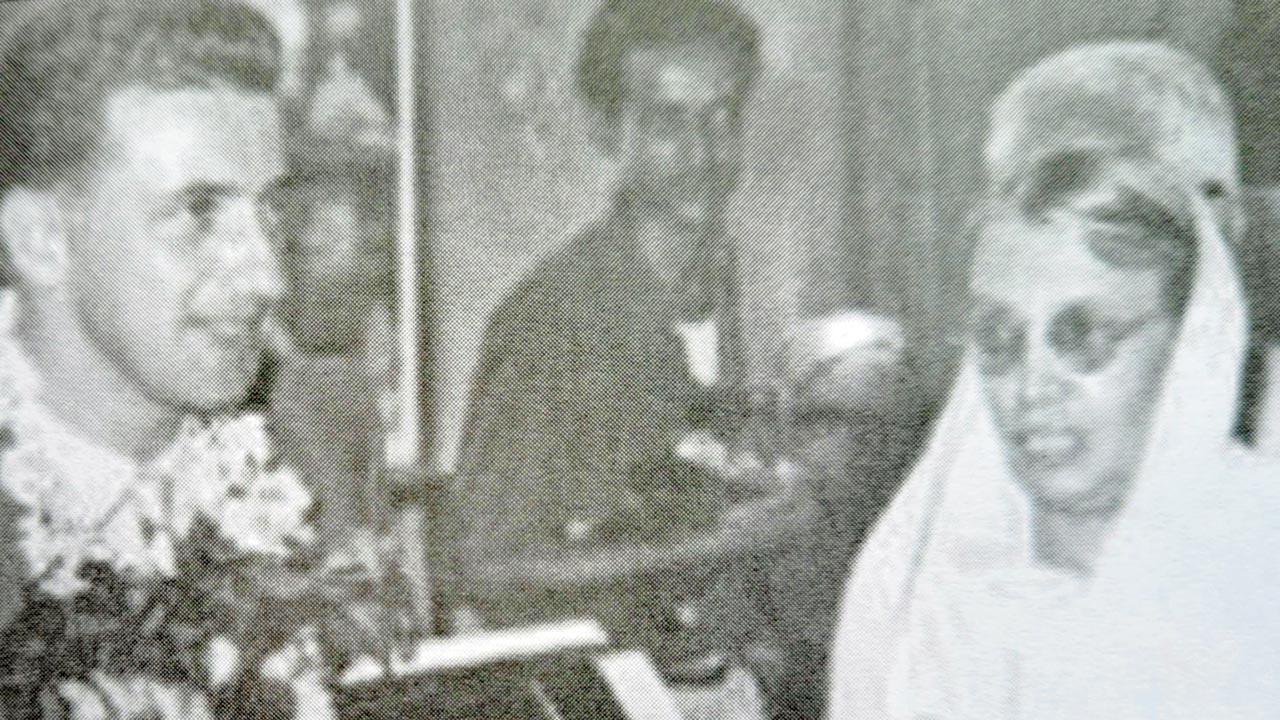 Despite staunch resistance from the Orthodoxy, translation was welcomed by liberal families, realising it facilitated a growing flock of youngsters to perpetuate the faith. “My forward-thinking father couldn’t tolerate sitting to pray without understanding. Rather than blindly rattle off what was expected, people like him appreciated what Dr Jhirad’s group offered from 1925,” says JRU elder Norma Elijah Suvarna. The veteran robustly galvanises young generations to pass on the group’s core beliefs and welfare work. 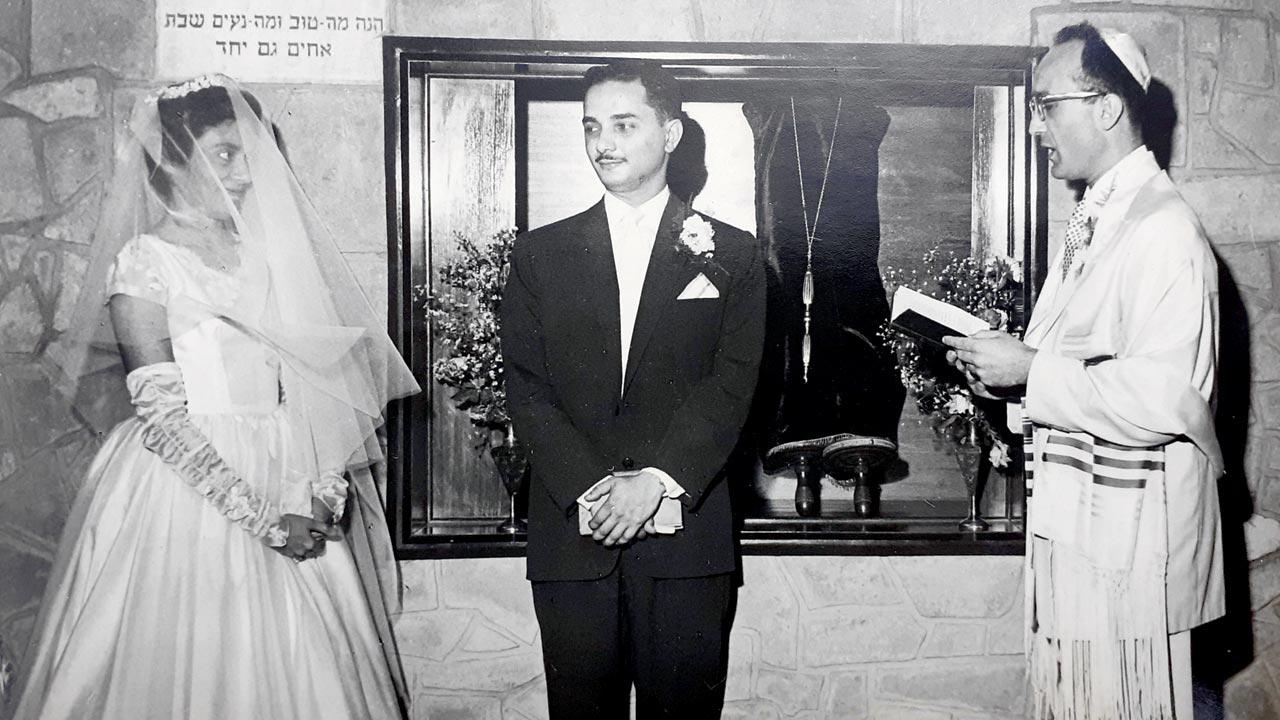 Rabbi Elisha Nattiv solemnising the first wedding in Rodef Shalom, between Noreen and Norman Elijah, in May 1960

Suvarna explains that the birth of JRU earned it prestigious place with founder nations of the World Union for Progressive Judaism.

Established in London in 1926, this is a global umbrella network of Reform, Liberal and Progressive organisations, towards whose seed expenses the JRU raised small contributions. 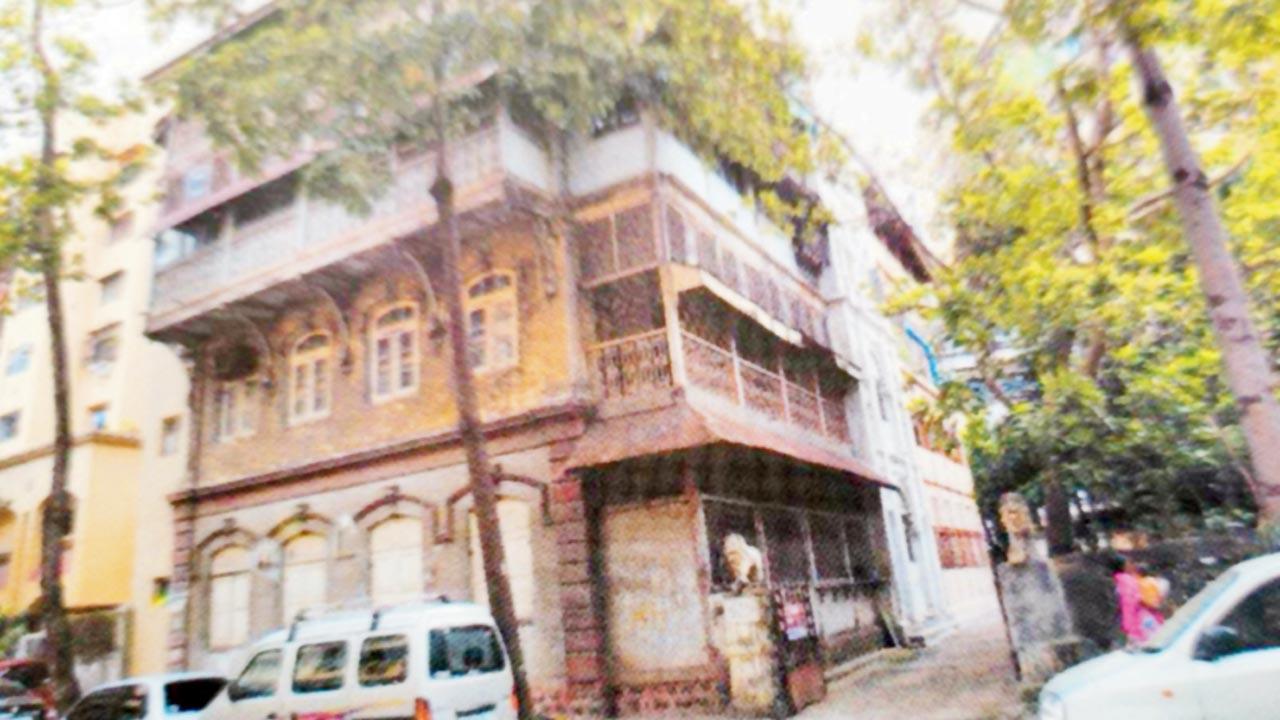 The Bombay congregation’s finances were in turn supplemented by progressive circles abroad and the Sassoon trusts. Those benefactors made possible aid for the JRU to obtain the Rodef Shalom premises in Byculla. This iconic structure was burnt in the 1993 riots, resulting in the city community losing invaluable Torah scrolls and volumes in one of the finest collections of Jewish religious literature. Constant references by JRU acolytes to “rebuild the Temple” indicate rock-solid hope and work afoot to reconstruct Rodef Shalom.

The overseas collaboration fortunately brought Bombay the tenured presence of the dynamic rabbis, Hugo Gryn and Elisha Nattiv, who considerably boosted Congregation Rodef Shalom, as the JRU came to be called. After its inception, with a constitution framed and committee appointed, Abraham Chincholkar had assumed the mantle of JRU’s lay ministership.

“I was able to comprehend Hebrew prayers through the translation in English. I was as happy to hear the wonderful liturgy set to music by Sarah Samson, who was JRU president in the 1990s,” says Elijah Jacob, Honorary Chair of the JRU Services Committee. A consultant and former Executive Director for the American Jewish Joint Distribution Committee, India—the Jewish humanitarian organisation headquartered in New York and operating in 70 countries—he adds, “My religious mentor Aaron David Shapurkar trained me to understand the structure of the prayer service for important festivals. And my cousin Sheba Yehuda taught the basics of Judaism in Sunday school at Rodef Shalom in the Rabbi’s flat adjoining the synagogue.”

Emphasising that individual choice decides where to position oneself on the Orthodox-Traditional-Progressive spectrum, Johnny Jhirad, dean of Podar ORT International School at Worli, says, “The commonalities of basic principles, which are Judaism’s treasures, is very high. A few cosmetic differences are to keep seamless the bridge between religion and the challenges of modern times. Progressives are of the view that prayers need to be concise and at least to some extent in the vernacular for all to benefit.”

Jhirad’s own journey transported him from Orthodox Judaism to the JRU—“My children were finding it difficult to pray without knowledge of the meaning of what was read. JRU was my solution to make them come to prayer.” To quote from his talk last year: “The first German Liberal Siddur (liturgical compilation) was published in 1819. During the 19th century, with the spread of universal literacy, new editions of the prayer book were produced around the world. They tried to allow the worshipper to pray with no contradiction between heart and mind. It is through change that tradition can remain fresh. After the biblical period, psalms of Davidic times and later compositions were added to our Orthodox prayers.”

A science student who recollects his professors were declared atheists, Benjamin Isaac, JRU President, took the leap from “irreligious to reformist”. Meeting Rabbi Gryn was one of the catalysts for this. “I was attracted to the rational nature of JRU thought, particularly the freedom extended to women wishing to be involved with prayer.”

This feminist angle lies at the heart of the second distinction setting the Reformists apart. Though Judaism generally accords women equality with men (in aspects of marriage, right of refusal, fair divorce laws), progressive Judaism explores issues of concern to women within the religious realm. Refreshingly, it not only recognises women rabbis, but also encourages women members to lead the congregation.

The JRU embraces the Bat Mitzvah, the female equivalent of Bar Mitzvah, initiating members to the fold. In the 1950s, Norma Elijah Suvarna was one of the first four Jewish girls privileged to have this ceremony. Then in her teens, its essence escaped her, she shares. The true significance struck with clarity when she repeated the ritual as part of a quartet of older women in 2017: with Noreen Elijah, Sinnora Jhirad and Rina Moses Rebello, in the presence of Rabbi Judith Edelman-Green visiting from Israel.

“The group influences more of an acceptance level for mixed marriages,” says Rina Moses Rebello, JRU secretary. “It’s a ladies’ line. Because I am born Jew, married to a Goan, my daughter is still Jewish. Besides adopting liberal ideas, the JRU has inculcated a feeling of openness in me personally too on many levels.”

The population of Indian Jews has dwindled drastically with migrations to Israel, Canada, USA, the UK and Australia. Deeply invested in revitalising carefully nurtured ideals in Bombay, the JRU youth wing takes seriously the task of keeping its youngest engaged with relevant activities.

“The Youth Group gave me a sense of community, bonding and friendships lasting decades down,” says Ruth Crishna, whose architect cousin Solly Reuben designed the Rodef Shalom interior. Crishna specially mentions the JRU choir, started by Dr Jerusha Jhirad’s sister Leah Jhirad and subsequently led by the soprano Sarah Samson. Its members were drawn from the Youth Group and the Sisterhood—the ladies’ sub-committee her mother was on, which brought out a cookbook and ensured that fundraisers, fetes and excursions ran smooth and served a large attendance.

“We kids were quite overawed by the singing in that choir of harmonies. A lot of Sephardic prayers were recited in a singsong tone,” says Crishna. “Sarah was strict at rehearsals. Probably came of running her sought-after kindergarten, Children’s Nook.”

Along with friends whose parents were JRU members, Elijah Jacob revived the Youth Group in 1979. “We got to know our Jewish peers in a spirit of camaraderie and wanted to undertake projects for community development, strengthening it in the process,” he says. Weekly meetings and the quarterly newsletter, Impact, announced trips, retreats, quiz contests, art exhibitions, picnics, and outings to watch films and plays.

Elaborating on how the JRU philosophy touches his life, Jacob says, “Progressive Judaism has helped me adapt well to co-religionists in our Indian society, with a healthy and respectful attitude towards them. The JRU’s modern outlook to religion promotes unity in diversity and respect for all.”

Next Story : Swap till you drop