The Gehlot pattern of great escape

Tipped to be INC president, the chief minister has been unexpectedly smart in holding the Rajasthan fort rather than be a ceremonial head of the party 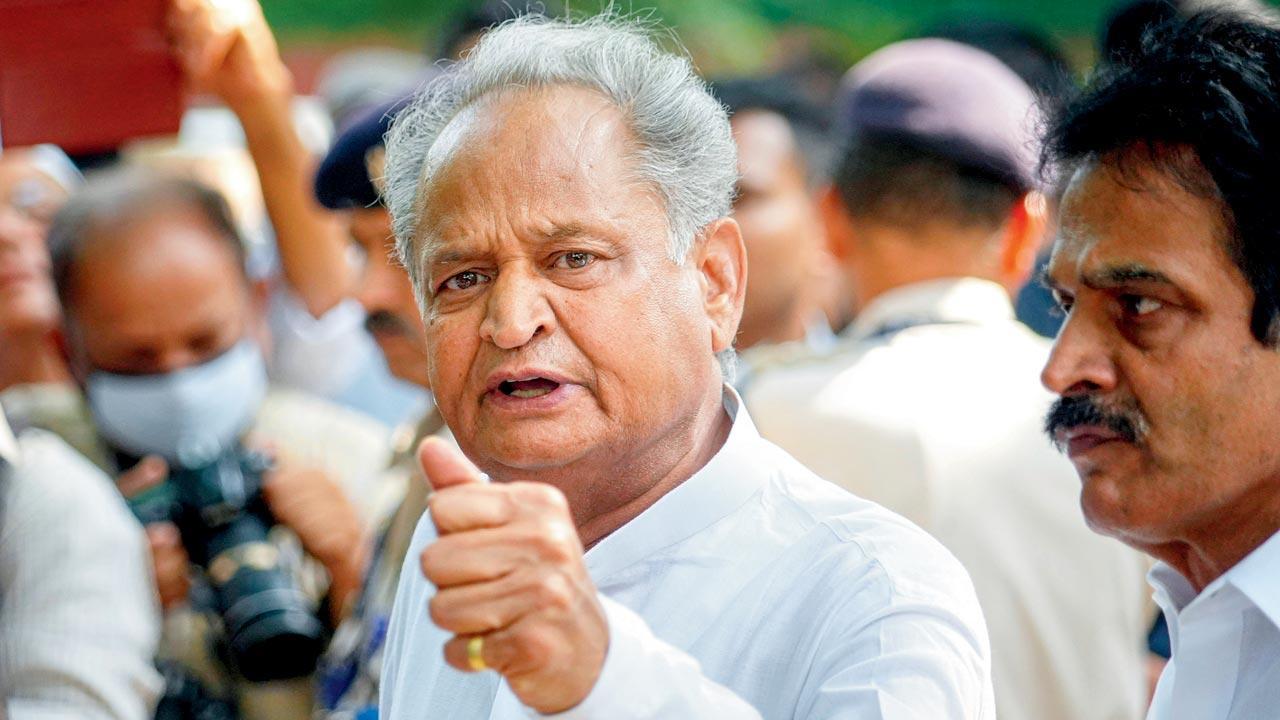 After the rebellion by his supporters, Gehlot simply apologised to Sonia Gandhi, saying she still held the right to decide the Rajasthan government set-up. Pic/PTI

There is a proverb in Hindi, “Hing lage na fitkari, rang chokha ka chokha” (maximum gain without much effort) that fits the Rajasthan CM Ashok Gehlot, who escaped the plan of getting displaced from the state office for the post of the national president of the grand old party, the Indian National Congress. Gehlot wanted both, but as things have turned up, he wanted the CM’s post even more than being a ceremonial head because the intra-party election would not have changed the status of a non-Gandhi office-bearer. The Rajasthan MLAs’ unexpected refusal to attend a legislative party’s meeting wasn’t possible without their leader Gehlot’s tacit nod. They wanted a seasoned leader with mass support in the lead instead of Sachin Pilot who had attempted a failed coup in collaboration with the Bharatiya Janata Party.

Post rebellion, considered an anti-party activity, Gehlot simply apologised to the party’s interim president Sonia Gandhi, saying that she still held the right to decide the Rajasthan government set-up. He has returned to the state only to begin an advertising blitzkrieg in the national/state media on a daily basis. For the time being—say till the next state Assembly elections, Gehlot has secured his place. He has achieved what he wouldn’t have if he were the party president instead of the CM. In the future, any untoward step on part of the high command should result in a bigger loss, helping the BJP to wrest power much easily in Rajasthan, one among a very few states now left with the INC. The Gehlot Gang seems to be prepared to stonewall any missile expected to be launched by the Delhi bosses, the Gandhis and their remote-controlled president, most likely Mallikarjun Kharge, who is pitted against Shashi Tharoor, who has proclaimed himself as a harbinger of change against continuity (of the Congress routine).

Apart from the president’s poll which has sufficiently satisfied a group of 20-odd senior leaders, who had written to Sonia Gandhi asking her to elect the party president instead of appointing one if the Gandhis were not interested, a timely compromise over the Rajasthan politics may have saved the Congress some more blushes, more so when Rahul Gandhi’s ‘Bharat Jodo Yatra’ is being received well and getting most-wanted criticism from its baiters. Anyhow, the Congress has been kept in circulation, which should augur well for it.

Interestingly, most wordsmith seniors have endorsed Kharge’s candidature. Tharoor was a signatory of the letter to Sonia but is contesting without the established lot on his side. The three-time MP from Kerala, where the party has its most Lok Sabha members elected in the current House, has been saying that the Gandhis are neutral to both candidates though many believe it’s just an assumption and the election result will prove them right.

In Maharashtra, this Dussehra promises to be very volatile with two rallies being planned by the warring Shiv Sena factions. As the spitfires try to tear each other into pieces, BJP leader Pankaja Munde, a perennial advocate of her political victimhood, will be speaking her mind at her own annual celebration the same day.  She has run into trouble umpteen times with her statements, one of which came recently. She holds a grudge that she has been denied power despite being one of the biggest mass leaders of the BJP, which will also be looking forward to the RSS chief’s annual address on Dussehra.

IAS is done, next IPS

The Indian Police Service and State Police Service officers holding senior positions have been expecting a major reshuffle before Diwali. In a mass transfer last week, some 40 Indian Administrative Service officers were shifted. Put off track by the previous regime, many babus have been brought into mainstream departments. But some from the MVA have been left untouched, the prominent being the chief of the Mumbai civic body and some seniors in Mantralaya. Likewise, it is said that the city police chief and state police chief, appointed by the MVA, would stay put in their respective offices, but the officers rank below in major cities and state HQ are likely to be changed. The police offices having the commissioners as their respective heads are more anxious. Sources say many officers who have worked under Devendra Fadnavis, who continues to hold the home department in this government as well, have been asked about their choices. However, most have left the decision to their political bosses, knowing that the decision about who fits where has already been taken, but not made official yet.

Next Story : Nothing commercial about Maheshwar