Rimzim Dadu, who celebrated 15 years in fashion with a show-and-textile exhibit last month, has been consistently attracting attention for the right reasons; but not enough, her supporters say 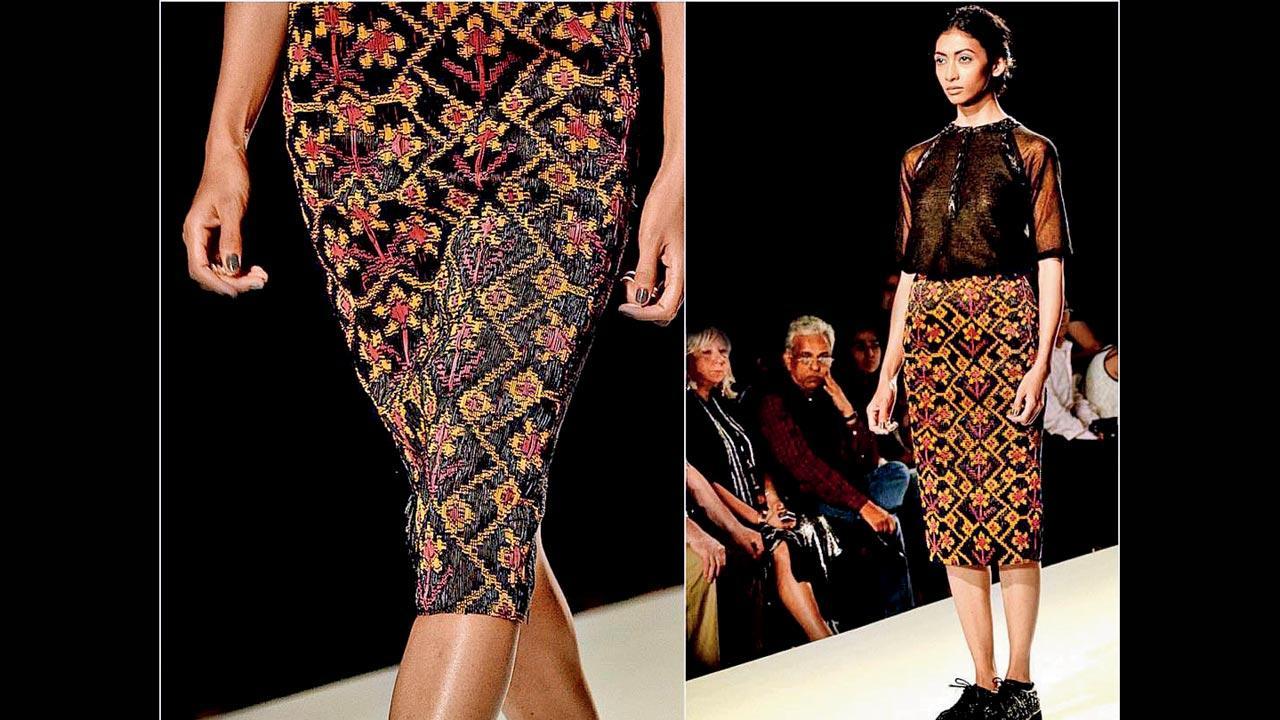 Dadu was the youngest designer to present her work at London’s Victoria & Albert Museum in 2015. In this leather Patola work, modelled by Lakshmi Rana, leather cords in different colours were meticulously assembled and individually stitched to imitate the classic Patola Ikat weave

What a nice girl,” is seldom the line heard about a fashion designer. That’s how celebrated Delhi-based stylist Gautam Kalra describes Rimzim Dadu. As former official stylist at Lakmé Fashion Week, he had worked on a young Dadu’s earliest shows in the late 2000s. “I remember her as a timid designer, but one who had a larger-than-life voice that she expressed through her clothes,” says Kalra, calling her a “genius” designer. “She’s my go-to person when I’m looking for visually brilliant garments for my editorial shoots.”

To celebrate 15 years in the industry, Dadu, 36, decided that a showing of her clothes would be accompanied by Rite of Passage, an exhibition of her work at Delhi’s Kiran Nadar Museum of Art (KNMA) on August 27. David Abraham of the revered Abraham & Thakore brand was present at the event. “Her designs are culturally rooted yet modern. It’s fascinating how she turns Indian clothing contents, like the sarees, into something modern like the metallic cord sarees [seen at KNMA show]. These are style ideas that cross boundaries between craft and art,” he adds. 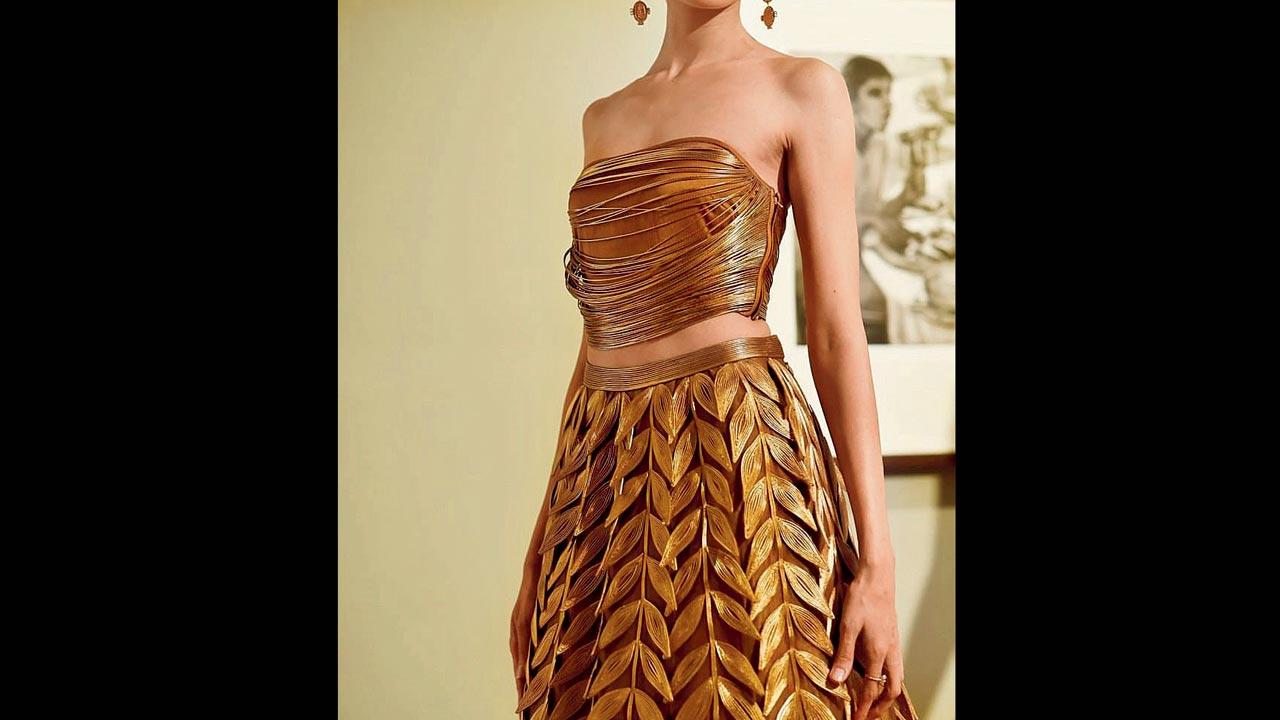 It’s no wonder that curator Mayank Mansingh Kaul, who spent significant time with Dadu during the making of Fracture—India’s first show on “textile as art” held at Devi Art Foundation in 2015—says, “she’s a textiles sculptor; she sculpts on the body”. “What struck me most was her great talent for materiality which never required her to explain much, as her work always spoke first. Also, her complete clarity on what she wanted to explore for the commission,” Kaul recalls.

For this exhibition, Dadu had designed a Jamdani saree, which she says took two years to make and some sleepless nights, in the traditional Bengal weaving technique but using silicon yarn instead of cotton. This meant designing her own loom as well. “The first silicon sheet that emerged [from the loom] was a disaster; it had stretched [like rubber band] and looked obnoxious. There was no rulebook I could refer to; nobody had tried making a Jamdani saree in silicon!” she laughs. 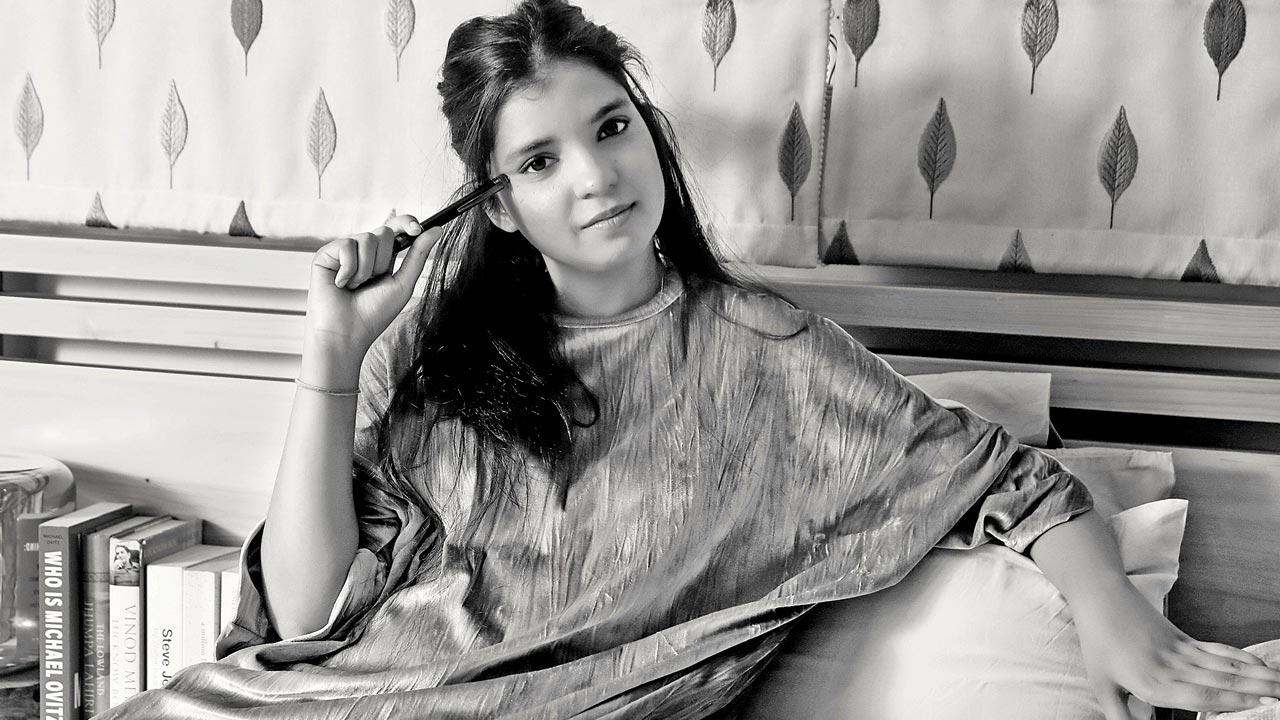 But, her uniqueness is also her Achilles heel. International editors who view Indian fashion through the lens of handloom tend to oversee work like that put out by Dadu. “Because one observes that they tend to premise writing about designers who work with traditional textiles, even if innovating with them. This kind of archetype probably sells more as a story. To resist such temptations and stick to working with unconventional materials [like Dadu is doing] is admirable,” Kaul says of the designer working at the intersection of fashion, craft, architecture and science.

Dadu appreciates the heritage of Indian textile techniques, but rather than directly integrating them into garments, she references it in modern ways. Her clothes avoid the pretty; do away with unnecessary ornamentation. In none of her work will you spot sensationalism or vulgarity. She doesn’t indulge in bluff or chicanery. Her collections may not hugely vary between seasons, but they evolve and always seem to be a few years ahead of the others.

Dadu’s peer, Kolkata-based clothes maker Kallol Datta, says not everyone can grasp the hold Dadu has over research and development. He tells mid-day: “The analogue techniques she incorporates to bring about her ‘looking-to-the-future’ textiles is pure brilliance. And to sustain that brilliance for 15 years in an industry which awards and revels in mediocrity is magnificent.”

‘I reengineer materials to make textiles’

What would you like people to know about your work?
How I reengineer my textiles; they are not picked up at a market. I choose different materials not usually found in fashion, like leather, steel and silicon rubber, and spend copious hours researching them, breaking them apart to develop and reengineer them into new textile blends.

Who or what inspired you to become a designer?
My father, Deepak Dadu. He ran a garment export business, designing for global high-street brands. He did it from his studio at the basement of our North Delhi home. As a 10-year-old, I spent most of my time there; I was fascinated by how he would translate ideas in his head into tangible clothing forms with pattern cutting.

Where do you find inspiration?
Honestly, I don’t have an answer. I wish I knew. I think it’s the result of what you pick up subconsciously; for example, I really enjoyed my visits to hardware markets as a young adult. I was fascinated by the display of metals. This could have inspired me to create our bestselling steel wire saree in 2016. Actor Sonam Kapoor Ahuja wore the black and emerald blue metallic drape at the Cannes Film Festival that year.

How does technology interact with your design process?
There’s a misbelief that I use a lot of fancy machines and computers to create my clothes. It’s the opposite. I am not a technology person per se, and like to use handcrafted techniques. But I am not opposed to using machines—if they make our life easier then why not? Why not mix hands and machines to get the best results?

Were you tempted to change your design aesthetic?
When I started out, designer wear meant bridal or Indian fusion; my clothes were neither. It was a difficult time, but I knew I had to follow my instinct because I could not make ‘normal’ kapda with gota-patti or sequin work. That said, as I grew older, I learned how to refine my designs, make them wearable, and understand what my customer wants. It’s taken me a decade to discover that I like to experiment with different materials and textures, and that is my voice and that is what I want to bring to Indian fashion.

Do you care what people think of your work?
I do; but at this point, I also know that I can’t please everyone. One thing I regret is that I lack the skill to build personal relationships within the industry; I realise now how important it is to have a support group in the industry.

What do you plan to do over the next 15 years?
I want to focus on making a mark internationally. I also want to expand into costume design, textiles and textile sculptures. The handbags and shoes we launched a few years ago have worked very well; I’d like to foray into newer verticals.

Next Story : Need to stop illegal buildings from coming up