Home > News > Opinion News > Article > This land is your land too

This land is your land too...

Our sutradhaars decide to join the movement in the wake of the Metro-3 car depot site status that looks set to return to the Aarey forest, thereby causing threat to this already vulnerable habitat 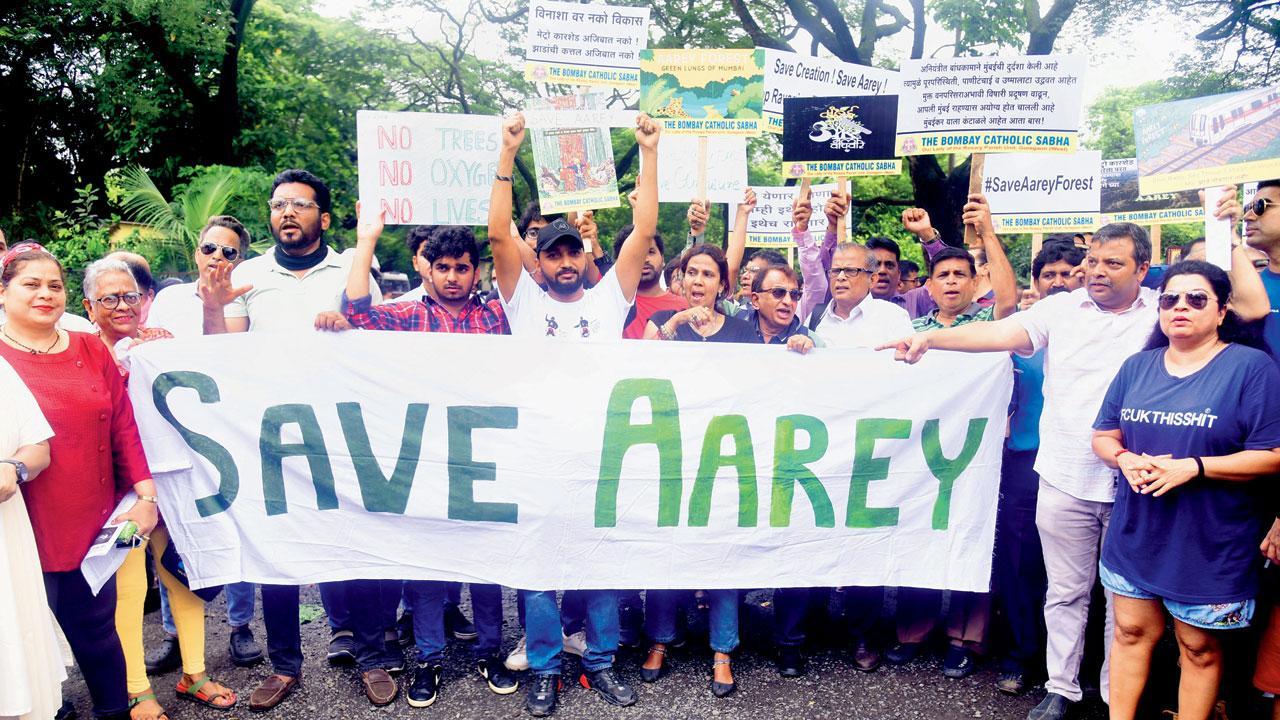 “Why so glum? I bet it’s because of this terribly depressing downpour,” Sir PM checked on his friend. In July, when the monsoon was in full force, their midnight sessions were confined to the interiors of St Thomas Cathedral. They would chitchat for a bit about the city’s goings-on, over chai and khari, and head back to their respective pedestals after that.

That night, incessant rainfall meant they were safely seated inside the historic cathedral. “Pheroze, the rain is welcome when compared to what the city has to contend with from an environmental standpoint. Unless you’ve been living under a rock, you’d know that the newly appointed state government has decided to resume work, so the Metro-3 car shed is set up inside the Aarey’s forest,” she rattled off, sounding extremely upset. “Of course, I heard about it. We have so much to lose, our precious green lungs. Dr Viegas was telling me about this recent development that he read about in Mid-day; it was their Page 1 story -- five big cats had been spotted in the very same location. Can you imagine! Wait, I think I have that copy with me. Here you go; read it while I fix us some chai from the nearby tapri,” Sir PM handed over the copy of the newspaper that Lady Flora began poring over in a flash. Ten minutes later, he returned, thermos flask in tow.

“This is so very unfortunate,” Lady Flora pulled her head out of the newspaper. “This reveals clear evidence of the fact that the spot is a home for these leopards, and now this construction. Sigh.” She was visibly upset and didn’t seem to care for the specially made adrak chai that Sir PM had painstakingly arranged for in the middle of the night.

“My Lady, please sip on your tea; it’s getting cold. I can sense this disappointment among so many Bombaywallahs. It’s all over the press and rightly so, plus I have rarely seen people’s movements take such a 360-degree approach. It’s quite noteworthy how our citizens have been protesting about these decisions with renewed vigour ever since the ruling was reversed,” Sir PM added. He shared a few critical facts about the rare flora and fauna that were found in this forest.

“Tell me Pheroze, you are a man who worked at the very highest office in the city. So is there any way by which you could use your clout to stop this?” Sir PM was a bit taken aback with Lady Flora’s request, and was silently chuffed that she considered him powerful enough even post his retirement. “I wish it was that easy, my Lady. There are layers of protocol and bureaucracy that need to be breached. Sadly, all my ‘men’ aren’t in office, nor do I have a direct line to the current bosses. It’s a fresh bunch and I am not so sure if I can work a miracle here, because clearly, things seem to have gone ahead at lightning speed. Or shall I say, “Bullet-train-fast-speed”, considering even that project is arriving in the city; from what I hear and based on facts shared by my friends in Gujarat, there are concerns…but we shall reserve that chat for another day. Our city’s green spaces are under threat there.”

“Okay, so clearly your former standing isn’t going to help us here. Instead, how else can we help from our front to ensure this movement doesn’t die down? Since we cannot do much to stop the ruling from the administrative side, at least let’s join hands with these citizens? What do you say?” Lady Flora seemed to be in the mood to up the ante on this cause that clearly seemed to have affected her at the very core.

“These groups tend to have meetings and silent protests almost every weekend. Plus there are awareness drives, from what I hear,” Sir PM informed, quickly adding, “…but it’s all happening in a far-off location,” referring to the Sanjay Gandhi National Park in Borivli. “That shouldn’t be a problem, right? Lady Flora wasn’t going to fall for Sir PM’s ‘faraway’ rant. “We must be with them to express our solidarity. It’s what we ought to do as aggrieved Bombaywallahs, fighting to save our green cover. So what if we have to trek from SoBo to stand shoulder-to-shoulder with our fellow citizens. We must get Bertie (King Edward) and Viegas to join in, too. And that useless Percy can gather all his fellow avian pals to come along,” she outlined.

“I will be there; it is the need of the hour—for more voices to support this movement till the very end,” Sir PM’s flashback to his younger days of helming movements against the Raj’s policies, seemed to have stirred him into going all out for the Aarey movement. “Now, that’s the Pheroze I know. Let’s get cracking,” exclaimed Lady Flora, reminding him to meet the following day with research and data on
Aarey. They were on a mission—to save a city forest.

Next Story : Need pavements that are pedestrians’ pleasure