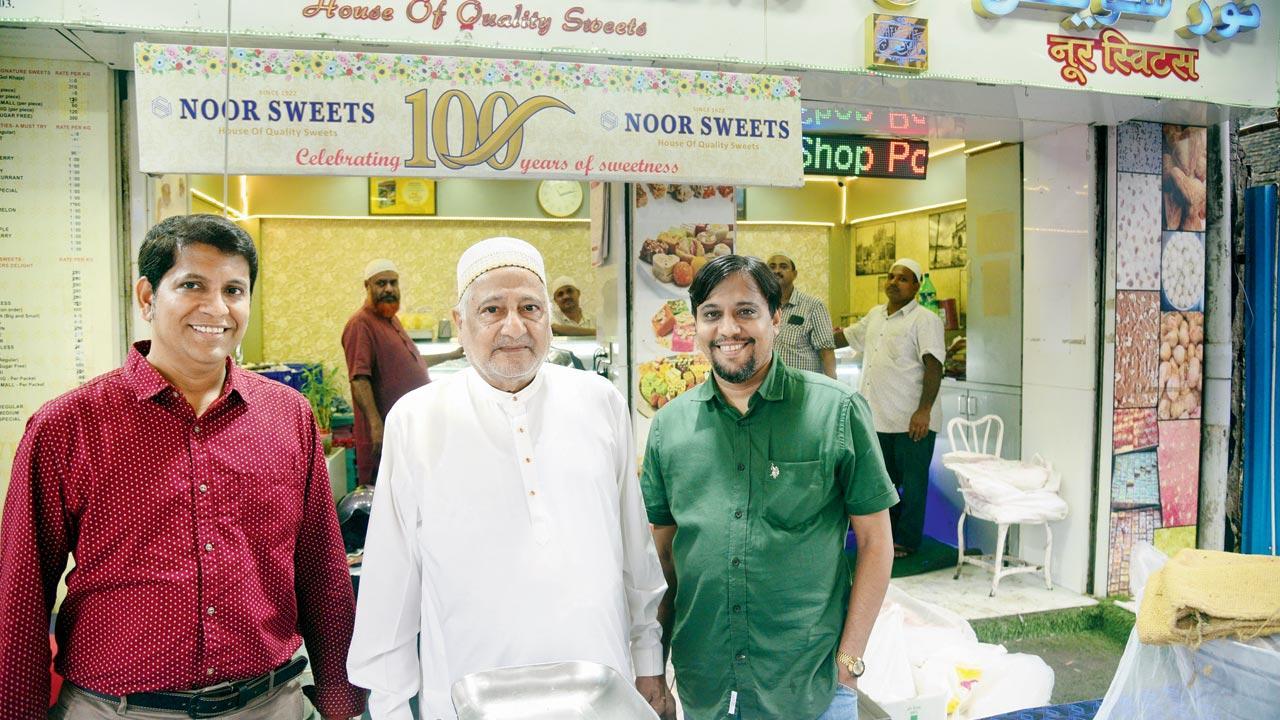 The boatman of Sleater Road
Last week I received a mail sparking a Eureka moment. Four years after these pages printed news of a local ferry rescuing monsoon-marooned Grant Road residents, the oarsman revealed his identity. “Your article on Sleater Road mentioned a boat was run from the station to various buildings. That service was by my company, established in 1945. Into construction today, then we also made boats in the Girton School compound,” wrote Fram Dhondy. The firm, Levka, paired its founder partners’ names. Levi, an Italian, supervised the boat building and a Mr Kanga, the construction activities. Hence, LEVi KAnga.

Touching twins
The description of a loyal liaison like few others came from photographer Hemant Chaturvedi’s college days—“Before entering the St Xavier’s campus, the last road to cross is the adjacent lane. Two peanut sellers on opposite sides resembled a curious pair of human gateposts you went through. They sat at this corner from 1943 to 2010. After one died, the other stopped coming. Best friends from Borivli, they travelled together daily those 67 years and split their earnings equally.”

Dr Jerusha Jhirad (1891-1984) returned in 1925 from medical studies in England to start the reformist Jewish Religious Union. Dr Anandibai Joshi (1865-1887) was the first lady physician qualifying with a two-year degree in (western) medicine from the US. Sanskrit scholar Pandita Ramabai Medhavi (1858-1922) pioneered promoting the education of Indian widows.

Last chat with a city father
In a year bidding adieu to several stalwarts, my interview with Gerson da Cunha focused on his experiences with All India Radio in the 1950s. He recollected, “Nehru had landed at Santa Cruz airport from a UN Security Council meeting. I was ready with serious questions, including his view on the Suez Crisis. A tired figure appeared at the plane door. I asked: ‘A good flight Prime Minster?’ I felt his fatigue as he put his hand on mine, saying, ‘It was wonderful’.”

Covering Yehudi Menuhin’s concert with the Bombay Symphony Orchestra on the Excelsior stage, da Cunha marvelled to hear the maestro’s Strad—“Foolishly requesting the most famous violinist on earth for an autograph, I was touched he wrote: ‘To Gerson da Cunha, in memory of our joint evening’.” 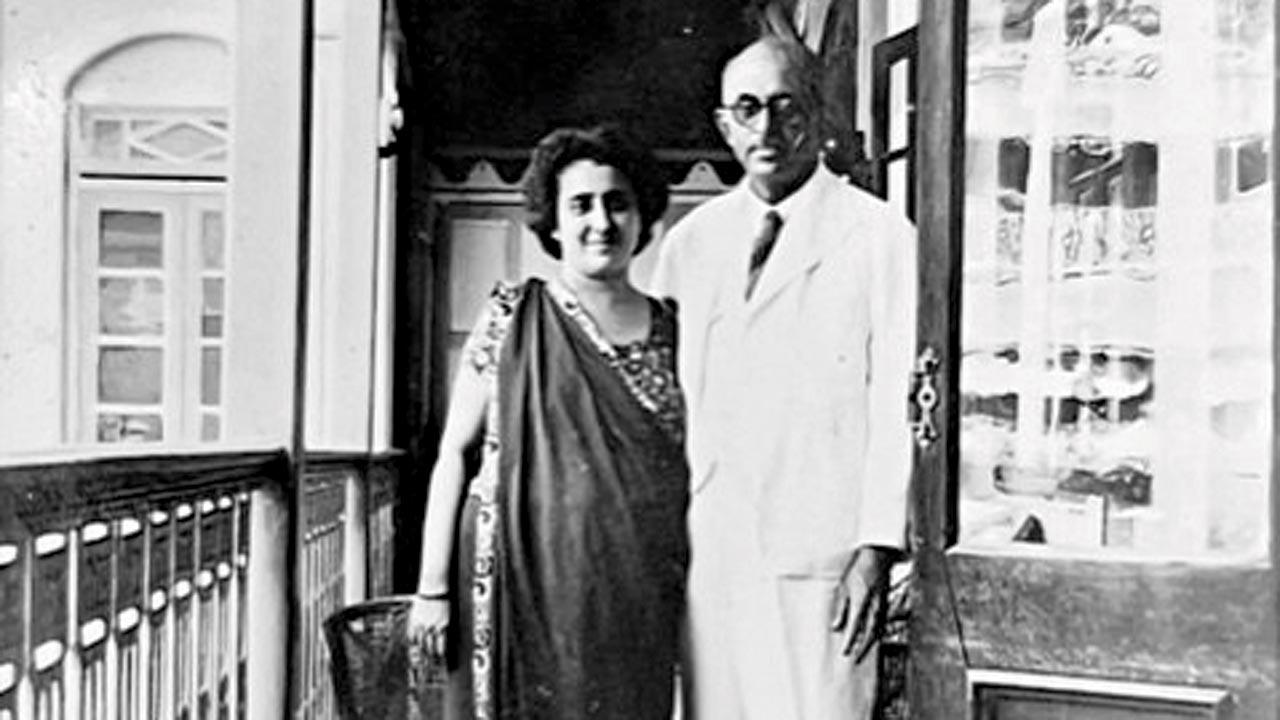 The good doctor
RN Cooper, after whom Cooper Hospital is named, was a surgeon so accomplished, he was flown to Iran to operate on Empress Farah Diba. The Shah offered carpets and gold coins in gratitude. Back home, generous Dr Cooper quietly slipped money under the pillows of poor patients he treated free. This kindness supported aftercare in the bed rest period he prescribed.

To name a CJI
Mapping certain buildings in depth, I have a soft spot for Ganesh Prasad on Sleater Road. Growing up in this colony, florist Sonal Shah says, “Nobody closed main doors, we kids went in and out of homes as they pleased. Dhananjaya [Chandrachud, Chief Justice of India] was an immediate neighbour, whose naming ceremony I attended. Our floor had other justices and civil servants—Justice Kotwal, the Lokurs and the Sukthankars.” 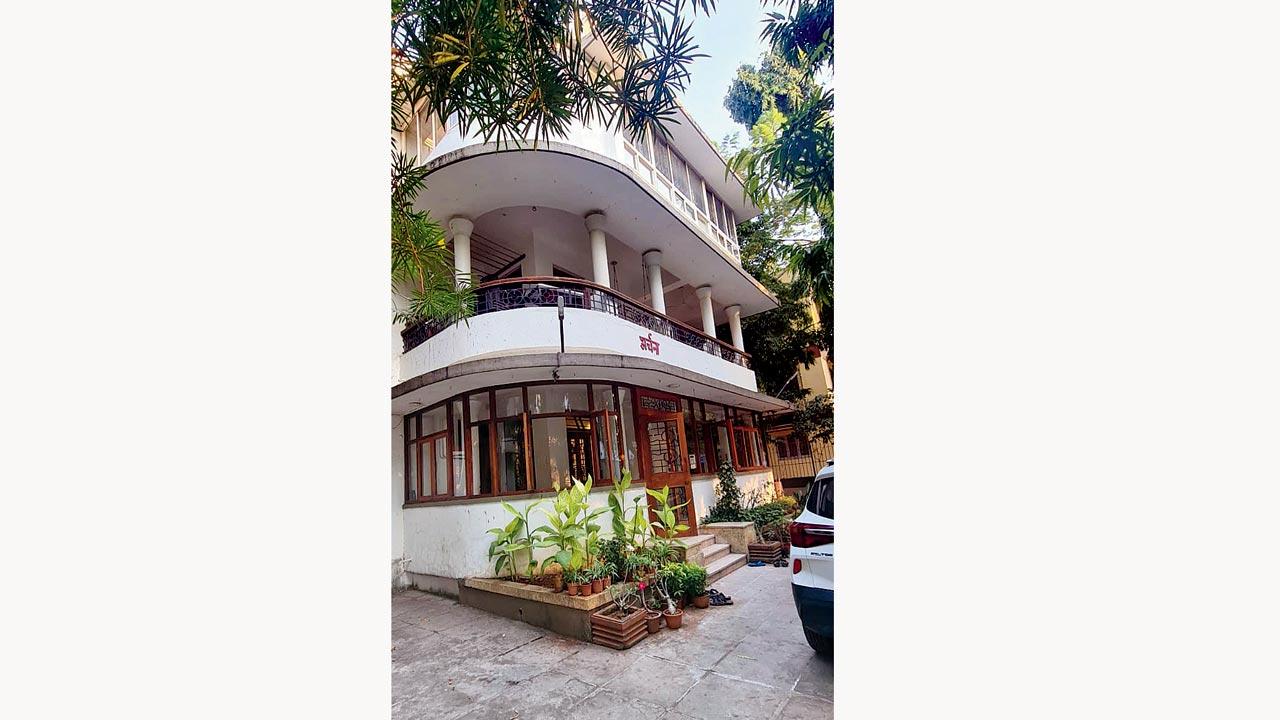 Deco dekho
This effort needs replication many times over. Archana is the only bungalow surviving on Vile Parle’s Lajpatrai Road, once lined with Art Deco structures from the 1940s-50s. The Shah family lives on the ground and first storey of this home built by Dhanubhai Desai on the second. Pushkar Shah’s grandfather Manilal was a professor before he began their BEC Chemicals business. Rather than mindlessly modernise, the Shahs consulted conservation architect Vikas Dilawari for the restoration, fully respecting elements of the building’s
original personality.

No dum?
A super slice of celluloid history almost missed making it. “‘Dum maro dum’ doesn’t seem right for her,” Dev Anand is supposed to have said, when RD Burman decided Lata Mangeshkar would warble his 1971 composition. Hare Rama Hare Krishna’s producer-director suggested Asha Bhosle instead. Despite her stepping in, Anand thought the number “strange” and considered dropping it. Burman pleaded that the tune stay in the soundtrack album at least. Finally filmed, ‘Dum maro dum’ tops requests at Bhosle’s live concerts, after Teesri Manzil’s ‘O mere sona re’.

Badge of honour
Profiling the city’s women patriots for our Independence edition, I stumbled upon the little-known life of Vijya Parikh. Her son learnt to walk in prison. When Vijyaben was arrested in a protest, Gandhiji requested the sentencing judge for leniency because of her toddler child. That being refused, the little boy accompanied his mother to Arthur Road jail. Taking baby steps, he fell on the rough stone floor. But proudly wore that badge-of-honour scar lifelong.

Bar barter
An extraordinary barter took place in what used to be Victoria Bar at Byculla. “Wartime soldiers without money for drinks left behind memorabilia in lieu, including accordion-like expandable cameras and Winchester pump action .22 rifles,” says Zend Lakdavala, whose grandfather was the bar proprietor till it got contracted to Tony DeSouza & Co, and became Cobana Restaurant and Confectionery.

Where The Jets jammed
Modelled on the Fab Four, The Jets got Bombay foot-stomping in 1964. On lead, rhythm and bass guitar, Michael Kirby, Malcolm Mazumdar and Suresh Bhojwani performed with drummer Napoleon Braganza. Their manager Ashok Daryanani still maintains a foothold on Battery Street in Suleman Chambers behind the Regal. In Flat 31 where the band practised, another Colaba boy came for rehearsals—Jabalpur-born, Dublin-bred, Nashville-star country singer Roly Daniels. 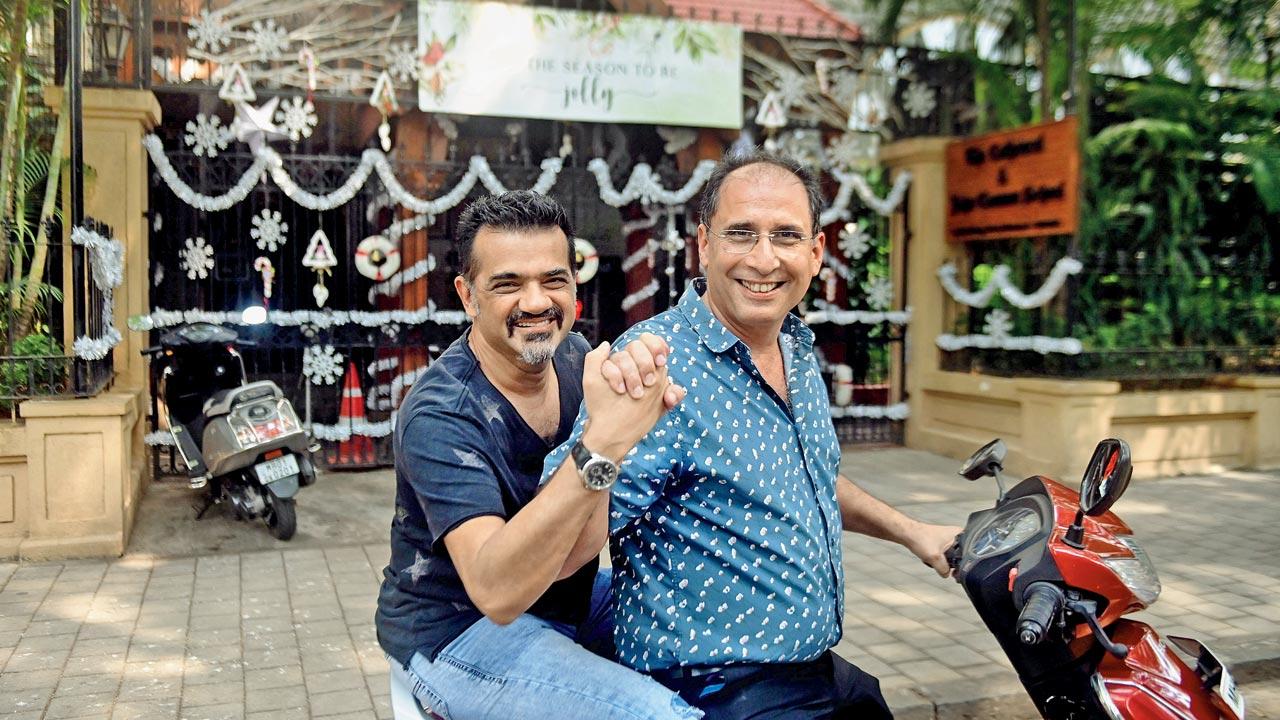 Bambai dost
From my series on city friendships are these four quotes to treasure:
Ehsaan Noorani (with Perzon Zend): “Leaving school brought a total turnaround for us, labelled ‘bad’ students. Academic records alone hardly define you. At heart and in essence, we still have not lost the sense of mischief. It’s essential to remain true to yourself.”

Viji Venkatesh (with Chirodeep Chaudhuri): “I do firmly believe in the city’s power to draw you deep into its vortex without taking away your identity. Bombay lets you be. Chiro and I are like that with each other.”

Shakeel Kudrolli (with Dr Vinay Deshmane): “Unlike most men, we have a history of sharing our innermost issues and vulnerabilities. We are close enough to understand all the happy and sad moments in each other’s lives.”

Rahul daCunha (with Criana Connal): “Am I proud to be a Bombayite? That’s fading fast. The arrogance with which new wealth gets flaunted angers me. I single-mindedly want to tell stories. And my God, India needs stories now.” 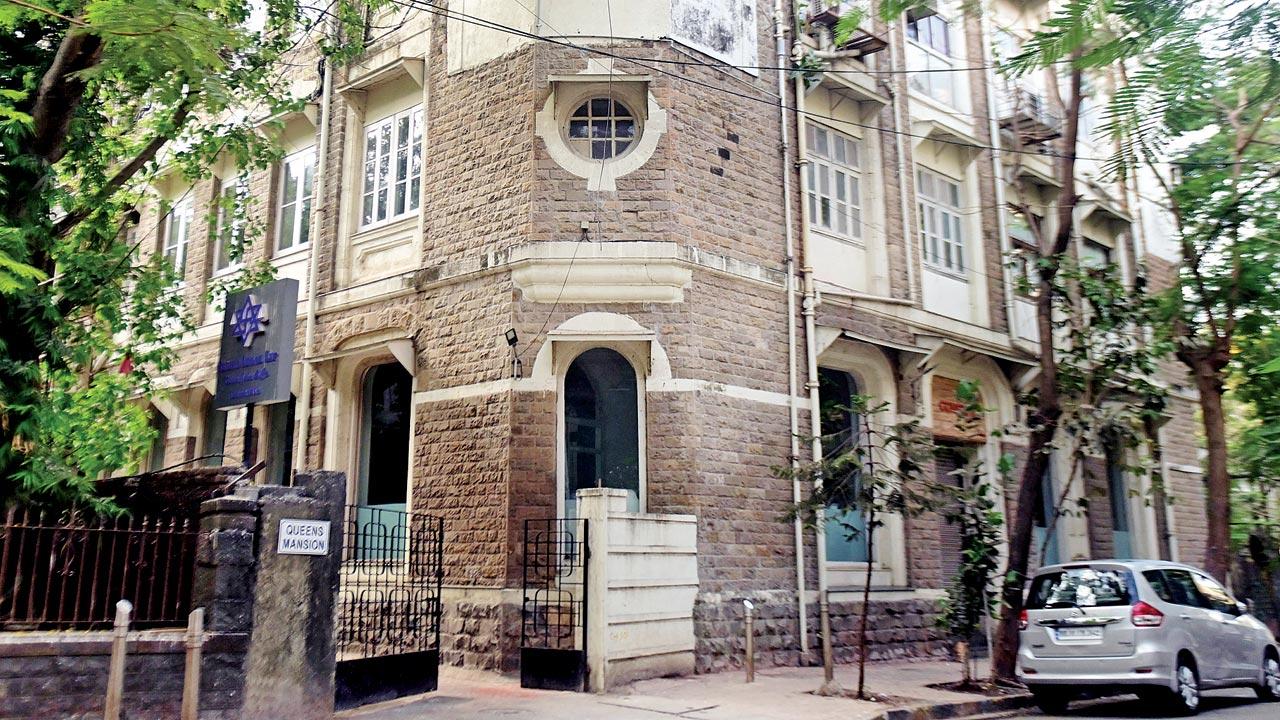 Bird man of Queens Mansion
Hearing about him for long, I met Pradeep D’Souza on the mosaic-tiled terrace of Queens Mansion on Prescott Road, Fort, only this year. Sheltering injured birds, he releases them tenderly healed. While Mango, the yellow parrot and Kiwi the green, nibbled my shoulder, egrets, owls, kites, mynas, bulbuls and seagulls hobbled or skipped around. Wounded avian “patients” are dropped off by people in purposefully placed
baskets downstairs.

To the lighthouse
Standing out in a column compiling old verse and new memes mirroring Bombay, is an evocative picture of the Colaba lighthouse. Sharing and translating it for me, Shanta Gokhale pointed out the last line indicates that the poem was written during the Raj:

The lighthouse on Colaba daandi
Sheds its light in the sea
Between the isles of
Khanderi-Underi
Colaba enjoys the breeze.
Man of Mumbai,
what do you look like?
You look white, you look white.”

Next Story : Planning crucial before setting up night bazaars