The recent trip to Verona with my partner and child was extra special, as I was finally over that period of uncertainty and panic about my financial situation that had been my constant companion for 10 years 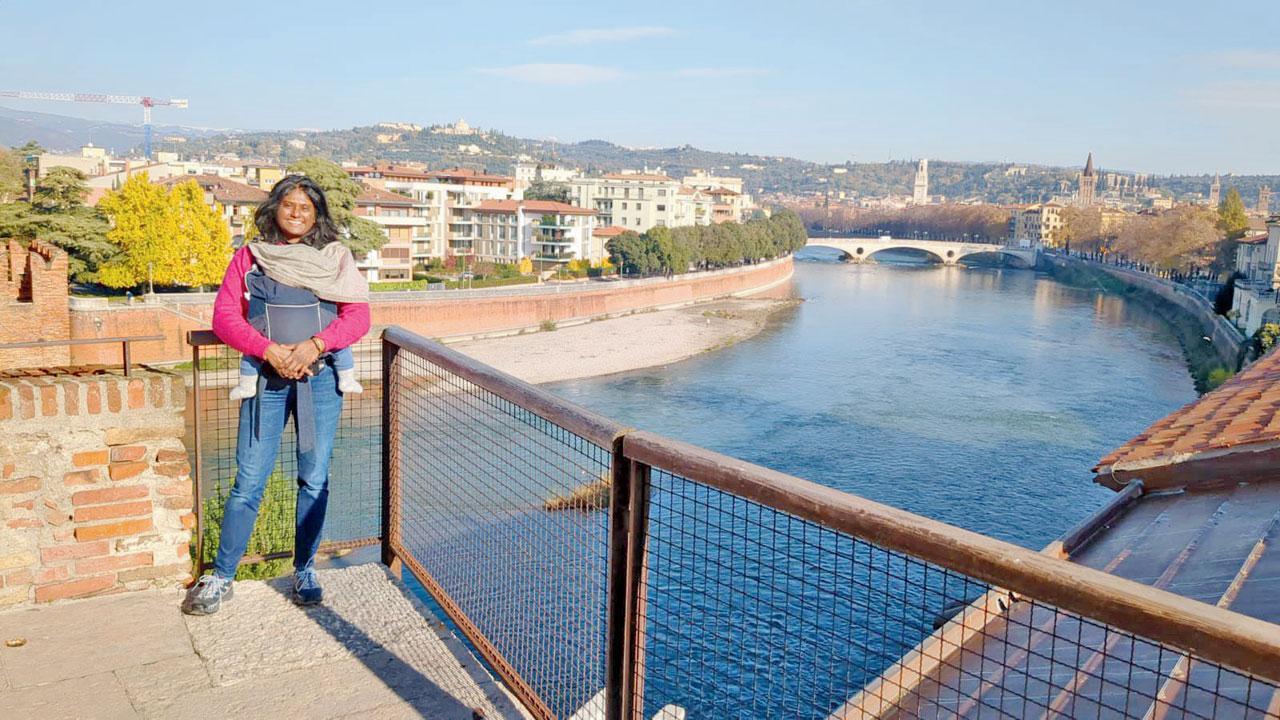 Adige river that flows through Verona has its origins in South Tyrol. Pic/Rosalyn D’Mello

Last week we spent three nights in Verona. It was exhilarating to visit and inhabit the city’s interior after having used it as a transit hub for more than two years. I had felt intimately acquainted with the station. Last Thursday, around noon, we took the train from Auer to Verona, and within an hour and a half arrived and excitedly walked into the city towards our Bed & Breakfast, encountering, almost immediately, the new gate, Porta Nuova, constructed between 1532 and 1540, after which the station is named.

We’d wanted to visit in August or September, when we had a bit of time on our hands, but we’d felt daunted by the prices, between 200 to 800 Euros a night. It felt outrageous to spend so much to visit a city that was in our backyard, so to speak. The river that flows through the ancient city has its origins in South Tyrol. We postponed our desire to visit until October, thinking we would do it to commemorate my partner’s birthday. But then we all fell prey to COVID. Finally, last week, my partner ‘had’ to take a day off to use up his remaining leave before the year ended. Rooms were more affordable since it is now winter.

While we’ve travelled quite a bit since our child was born, this time felt different because he could crawl. His capacity to see and to register the environment around him has also significantly enhanced. He turned nine months old on October 24 and everyday he seems to grow exponentially. But apart from this development, what felt remarkable to me during this trip was that for the first time in my life I wasn’t counting every cent. Central Europe is by no means cheap. Each time I have travelled here in the past, I would maximise on sightseeing, using my press pass to gain free access, rarely ever pausing to sit in a restaurant because doing so involved spending more money. I always stayed in guest houses away from the city because they were significantly cheaper. I was also mostly a ‘to-go’ traveller, oftentimes buying my lunch at supermarkets and picnicking in a park. This year I managed to be less frugal because I am finally earning something resembling a stable income.

Commanding for my work the fee I rightfully deserve has helped me accrue a small amount of money that one could consider disposable. I don’t like that word, though, because I still have too much financial trauma from living independently for almost a decade as a freelancer in New Delhi. I am not rich enough to have money to throw around. But I am suddenly not poor either, which has been a game changer in terms of how I am navigating my way around Europe. For the first year that I lived here, I had been earning, primarily, in rupees, which really is like getting the short end of the stick when you must manage the cost of living in a wealthy province of Italy. Going to the supermarket always put me in a state of anxiety because I would look at the price of a shampoo and begin to calculate its cost in rupees and then before I knew it, mid-aisle, I would feel panicked and afraid of this future I had chosen for myself in which, in the absence of language skills, my next best opportunity involved institutional care work or cleaning rooms, neither of which I felt adept at.

As this financial year ends for me as an Italian tax paying resident, I am allowing myself to feel a bit chuffed about how far I have managed to come in such a short length of time. I have done my most exciting, challenging, and game-changing work after I became a mother, which is something, I imagine. Two weeks ago, the student at the University of Bozen-Bolzano who chose me as their thesis advisor wrote in to tell me how well they had fared, and I felt so proud of them and of me. It’s taken me more than 10 years to arrive at this stage of financial security while navigating a career as a self-employed professional within the arts and culture sector. I still remember all too well the stress of being down to the last Rs 200 in my bank account and chasing clients for payments and never knowing when they may come in, all the time second-guessing if I should, instead, have taken a full-time job with a company. Ten years of struggle has, somehow, paid off…

On our last evening, we wandered through the city’s centre in search of a cocktail bar I had read about, Archivio. It is tiny and as crowded as a ladies’ compartment train during rush hour in Mumbai. I stupidly stood in line when the norm is to shout your drink of choice to the bartender. I ordered our current favourite: Negroni Sbagliato. It was the best we’d had thus far.

Next Story : Traffic rules exist for the benefit of everyone